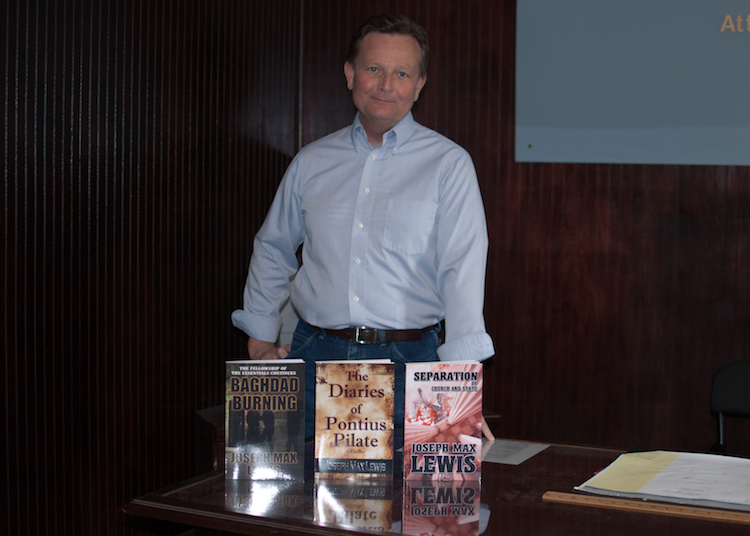 “The story attracts me to writing. You start with this idea and keep asking yourself, ‘What happens next? Then what?’ You want to get it down right so others can see it and find out how it all ends.”

Max Lewis is a man with many stories. He grew up in Brighton Twp. and graduated from Beaver Area High School. Upon graduation, he enlisted in the United States Army and served with the Army’s Seventh Special Forces Group (the Green Berets). During his service he received anti-terrorist training and served as an instructor at the Special Forces Qualification Course.

After being honorably discharged as a Sergeant, Lewis went on to work in the steel mills for a year before completing his undergraduate degree at the Pennsylvania State University and The University of Tel Aviv, then completing law school at the University of Pittsburgh. He has been an attorney in Beaver County for more than 25 years, concentrating in estates, probate, and car accident injury cases. If this didn’t make him interesting enough, Lewis also has another thing on his resume worth noting – published author.

From Books to the Silver Screen

Lewis has been writing for nearly 15 years and has published three novels in that time – The Diaries of Pontius Pilate, Separation of Church and State, and Baghdad Burning; along with two short story collections – Just Verdicts and The Declaration of Independence – John Hancock.

But it is his debut novel, The Diaries of Pontius Pilate, that is currently getting a lot of attention; it won’t be long before you can also see it on the big screen.

In this thriller, the action starts immediately when a member of an archaeological team is murdered while on an expedition along the shores of the Dead Sea. The much sought after, controversial artifact is twenty copper scrolls etched with the results of Pontius Pilate’s year-long criminal investigation into the death and resurrection of Jesus Christ. The action continues throughout the book as the two main characters, an archeologist and his deputy, are in a race to save the scrolls from being destroyed and, in turn, being destroyed themselves.

It took Lewis approximately a year to write The Diaries of Pontius Pilate and he says the idea for the story just popped into his head of what would have happened if Pilate investigated Christ’s death.

Nearly three years after it was published, Lewis started discussions with the co-producers, co-writers and the creative forces behind the movies God’s Not Dead and God’s Not Dead 2 – Chuck Konzelman and Cary Solomon of Believe Entertainment. Konzelman and Solomon have more than 45 years combined experience working in Hollywood, including a number of successful theatrical releases and televisions movies within the Christian genre.

After nearly a year of emails and phone calls between the three, an agreement was made for Believe Entertainment to obtain the rights to turn The Diaries of Pontius Pilate into a movie. The process of taking a book from paper to screen can take anywhere from months to years, which is “very similar to finding publishers for your books, so I’m used to it,” said Lewis.

In the meantime, Lewis continues to write and, surprisingly, he has yet to battle a bad case of writer block.

“For me the problem is maintaining discipline – to practice law when its a law day and to write when it’s a writing day. Once I start, writing is sort of obsessive with me. I just want to keep going.”

According to Lewis, it’s important to keep going and to continue writing and improving. He has this advice for all the aspiring writers out there:

“Read and write, a lot. If you don’t read a lot, you’ll never know how to write. If you never write a lot, you’ll never get good at it. Choose one or two people, carefully – aspiring writers, school teachers – and ask them to read your work and tell you only what’s wrong with it. Forbid the good comments (at first), but make sure they are honest in their critiques.”

If you want to glean some more writing advice from Lewis, he will be at the Chippewa Library on Tuesday, May 31, from 6-8 pm to talk, along with the opportunity to snag an autograph from the author.

If you are looking for a book to start off summer with, I personally would recommend The Diaries of Pontius Pilate. It’s a fast-paced thriller that you won’t want to put down. And it’s always best to read the book before you soon the movie, right?

Lauren Walker
Lauren Walker was born and raised in Pittsburgh and became a resident of Beaver County through marriage. She now lives in Beaver with her husband, three kids and little dog. She is an optimistic Pirates fan, decent church softball player, and digs an organized closet.
 Share this article:  Facebook  Twitter
Coming Here is Nice May 19, 2016 By Amanda Bradley
0
Comments
Traditional Small Town Men's Grooming at The Local Barbershop in Baden May 17, 2016 By Guest Post
0
Comments