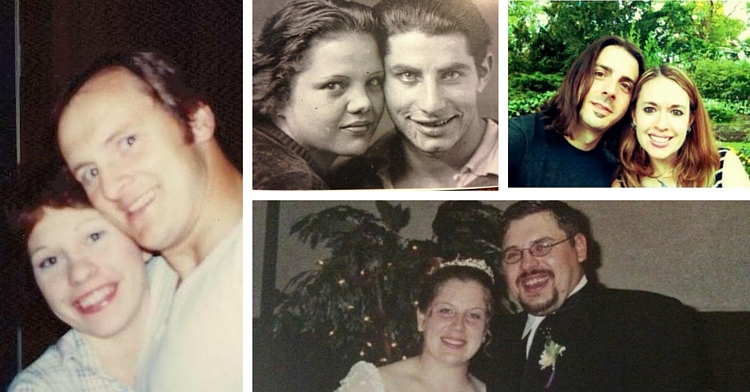 Growing up, Valentine’s Day was celebrated in the usual fashion. First school parties filled with glittery shoes boxes and chalky candy hearts, then handmade valentines and Anderson chocolate pretzels, to bubbly champagne and red sprinkled cupcakes. For many of us, we spend the day indulging in rich foods and exchanging sparkly cards with the ones we love.

Sitting at my sister’s the other day, I watched as her husband surprised her with roses and pizza rolls. This small gesture spurred on the conversation of how they met. As I listened, I thought it would be really nice to hear from some of our readers and have them share their love stories for the holiday.

I spoke with local teacher and librarian, Kelly, and she shared how her and her husband, Jay, first met.

“I guess our story is a good Beaver County one. I grew up in Aliquippa and Jay grew up in Center. We both attended the same elementary school up until 2nd grade (we had different teachers), then Jay moved to Center. Our paths never crossed, though we had friends in common. We both graduated in 96.”

“First year of college (IUP), Jay’s friend, Seth, told him that he needs to find a girl named Kelly from Aliquippa. (Background: I knew Seth through an old boyfriend. Seth and Jay were in a band together throughout high school.) He laughed it off since it was such a large school. Second semester of school rolls around, we were both enrolled in the same class, Research Writing. When I stood up to introduce myself, he realized that I was the girl from Aliquippa that his friend wanted him to meet. After class, Jay walked up to me and asked if I knew Seth and we ended up dating shortly after that conversation (January 1997). We have been together ever since!”

Former Beaver County resident, Phyllis shared her story on how her and husband, Tom first met.

“I was in the same Sunday School class as Tom and for several months (on and off), I tried to talk to him but whenever I spoke to him, he just smiled or gave me a one-word answer.”

“This particular Sunday I sat next to him and frankly, I was moved by his closing prayer. I told him so and as usual, gave his one-word answer – ‘Thanks’. He turned and walked out the opposite door in the room and I turned my back on him to close the door of my getting to know him at all. BUT, one last look (I thought). So I turned around only to find him looking at me. We both started laughing and sat next to each other in church. Needless to say, I did not hear a word the preacher said that day.”

“He asked me afterwards if I was to be at our Sunday School party on Saturday. Sadly, I was to leave for Ecuador for 6 weeks on a mission trip the following Friday.  I really thought I had found my soul-mate and prayed to God if there was anyway to delay my flight to Ecuador, I know he would be the One. On Wednesday, I got a call from the airline that my flight was delayed until the following Monday. I KNEW IT!!  I showed up at the party and he dropped his ‘Playmate’ that was full of food. His mouth hit the floor and it was truly a surprise. My only regret is that I did not meet him sooner.”

Amanda, a local nurse and Beaver Falls graduate, told me the story of how she met her husband, Joel, a Blackhawk grad. Their story takes place at Humphrey’s, a Lost Beaver County favorite. She had stopped at the restaurant one night with her friend and (as she later found out) Joel’s sister in law. Looking across the dance floor, she saw Joel, the only guy on the dance floor. She laughed and said, “Why not?” as she headed out to the dance floor.

This May, Amanda and Joel will celebrate twelve years together.

My favorite love story features my grandparents, who were Midland residents for over sixty-years. I remember as a child, begging my grandma to tell me their story over and over.  They had met while she was a senior in high school and he had recently graduated, delivering ice to local businesses.

She never gave too many details but the one thing we did have, was the infamous picture. It shows young lovers, randomly captured by a local photographer, during a rainstorm when they had sought shelter under the awning of his business. It was this picture that my grandfather used as the emblem on his ring, that he would wear every year on their anniversary.

Their romance blossomed and despite protests from her parents because of his ethnicity, they ran off and were married. Dressed in a polka dot dress and cloche hat to look older, after being sent away on their first attempt, believing she was too young (she was 18 and he was 19). It wasn’t until their first child (of eight) was born, that she heard from her parents.

In their first months of marriage, she worked for another family, cooking, cleaning, and scrubbing floors. My grandfather, wanting his wife to care for his home and their children, barged into the house, swept her up into his arms, and carried her off into the sunset. Or at least that’s how I think the story went…

Would any of our other readers like to have their love stories shared on YBC? Let us know!

Whitney Scelp
Born and raised in Beaver County, Whitney graduated from Geneva College, is a nurse at the local hospital, and still resides in the area. She is looking forward to training her daughter in the ways of Beaver County…such as Hot Dog Shoppe chili dogs, Midland Fourth of Julys, and pierogies. Follow her on Instagram @wandering_wannabe for her local and not so local favorites.
 Share this article:  Facebook  Twitter
I'd Like to be a Dermatologist February 15, 2017 By Erin Ninehouser
0
Comments
Attention Soccer Moms: DST's Pitch Preparation Soccer Program is Ready to Go! February 13, 2017 By Marc Grandinetti
0
Comments