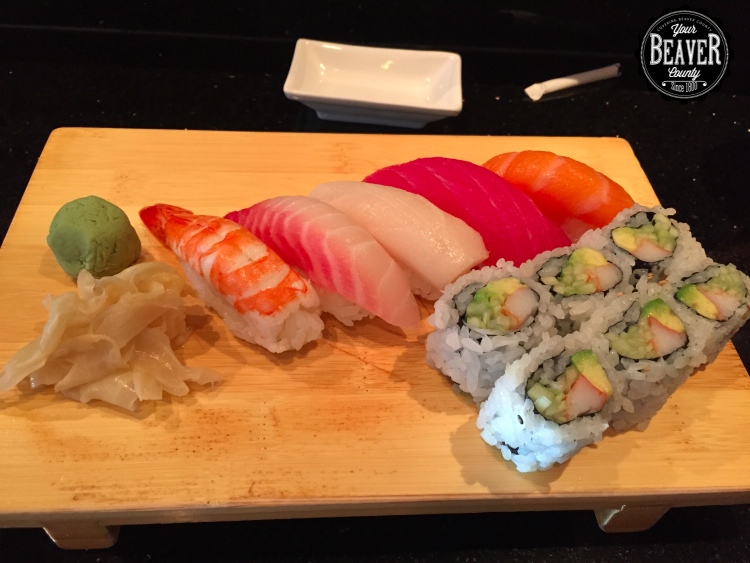 One’s relationship with sushi can be described as love-hate: either you really, really love it, or you hate it. There is no in between.

Fortunately, sushi fans in Beaver County don’t have to travel far. Yama Japanese Restaurant, located in downtown Beaver, is the leader of the pack when it comes to eating sushi locally. Yama, meaning “mountain” in Japanese, strives to deliver food in an aesthetically pleasing way, according to their website. They are committed to using the freshest ingredients to provide the best quality of Japanese food in the area.

The opening of Yama was a groundbreaking moment for the “food scene” of Beaver County. Not only was it the first of its kind, but its prime location along Third Street in Beaver meant another awesome establishment to the plethora of restaurants already located there.

Yama’s clean, sleek interior actually resembles a Japanese sushi house. Patrons can sit at tables, booths, or even at the sushi bar while the skilled chefs prepare your rolls. Yama also provides diners with excellent and attentive customer service.

Mr. Yeung, the owner, has lived and raised his family in Beaver since the early 1990’s, and has grown to love the town and its people. Beaver has been a place that has embraced him and his family since he moved to the United States from Asia.

During one of his frequent trips to New York City, Mr. Yeung noticed the abundance of Japanese restaurants there. As he drove back to Beaver, he decided that he wanted to offer fellow Beaver County residents Japanese cuisine that is comparable to any of the major cities. He knew that Beaver County didn’t have its own Japanese specific restaurant and wanted to bring a different taste of Asia to his fellow neighbors.

As a sushi lover myself, I have no reservations putting Yama’s sushi, in particular their Yama special rolls, up against any of the big name sushi places in Pittsburgh. Yama’s rolls are as good, if not better, than their counterparts.

They offer over 25 different “special rolls,” or maki rolls, that are loaded with fresh, top-notch ingredients. They also offer an incredible lunch special: two rolls for $9 or three rolls for $12, including soup or salad with their famous ginger dressing.

One of the main things I, along with most professional eaters, look for is consistency when it comes to my food. Yama is as consistent as it gets. You can pretty much guarantee your food will taste just as good each time you eat there. If you love sushi, then you will love Yama. It’s pretty simple.

Also on the menu are tempura and teriyaki entrees, Japanese fried rice, udon and soba noodles, not to mention a variety of Japanese appetizers and salads. As is common with other Beaver eateries, Yama is BYOB, allowing you to enjoy your own glass of wine or sake with some outstanding Japanese cuisine.