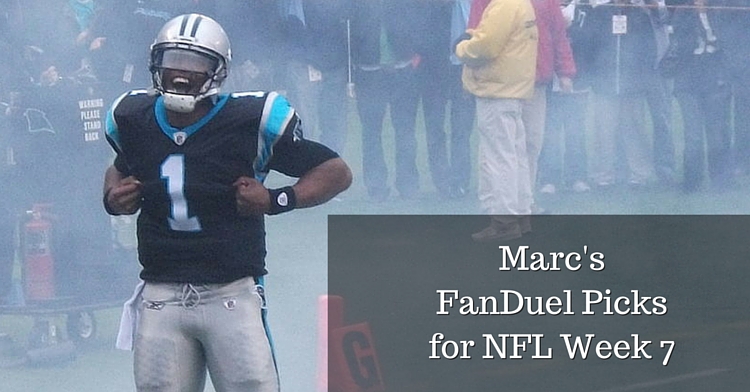 If you took my advice last week and used my line up for your Fan Duel league, chances are you didn’t win any money. I had some good picks, but some unexpected guys (like Detroit QB Matthew Stafford) really went off across the NFL last weekend. However, I did win one league I was in and came in second in another, winning me close to $100. I’ll take it!

My go-to pick was Tom Brady. He cashed in, ripping off 312 yards and 3 TD for 23.48 points. Matt Forte had a good day as I predicted, scoring a touchdown and going for 18.4 points. My biggest bust of the week was the one I feared the most, Charcandrick West. The Chiefs backup-now-starting running back had 33 rushing yards, and only 2.4 points.

My winning combination in another league I entered from last week netted my team 141.62 points. My line up consisted of QB Andy Dalton, RB Chris Ivory, RB Ed Lacy, WR DeAndre Hopkins, WR Larry Fitzgerald, WR Allen Robinson, TE Travis Kelce, K Blair Walsh, and the Bears defense. With the exception of Lacy, all of my guys performed at a high level. Nothing is better than winning a FanDuel among all of your friends. Bragging rights + cash = satisfied.

This week, the NFL kicks off Sunday morning at 9:30 am from London, with Buffalo and Jacksonville getting things started. These London games might be more than just a trend soon. I predict the NFL will have a franchise in London by the end of the decade.

Here are my picks for week 7 Fan Duel, Sunday-only leagues.

Cam is leading the MVP race at this point of the season, but that means nothing. What means more is that he’s playing at home on Sunday night against Philly. Yes, the Eagles held the Giants to 7 points last Monday night. But they won’t contain “Superman” Cam Newton.

Because why wouldn’t you? He’s been the best running back in the NFL so far. Yes, yinzers, even better than LeVeon Bell. And he gets a nice match up on the road at Tennessee this weekend.

The Dallas running back has barely touched the ball this year. However, current Cowboys running back Joseph Randle has been uninspiring. And the Cowboys are making a change a quarterback this week, going with Matt Cassel over Brandon Weeden. I look for Michael to have a big game against the Giants just like Eagles running back DeMarco Murray did last week.

The Dolphins wide out has been extremely consistent all year. He’s getting a ton of targets, and he’s an athletic freak. He faces a Houston defense this week in a game that could be high scoring, and it’s in Miami.

Welcome back, Martavis. After sitting out the first five games this season, Bryant went off against the Cardinals, with 6 catches for 137 yards and 2 touchdowns. Landry Jones will be getting the start again for Pittsburgh, and he seems to have found some chemistry with Bryant in the short time he was under center last week.

The Jets superstar squares off against the Patriots in the most anticipated match up of week 7 in Foxborough. This game has the makings of one of the best of the season. The Jets are hot, playing well on both sides of the ball. The Jets will most likely need to throw the ball to win this game, and Marshall will be heavily involved again.

Browns QB Josh McCown has been airing it out this year. And his favorite targets are WR Travis Benjamin and TE Gary Barnidge. Barnidge has been a fantasy stud so far. He has 5 touchdowns, including four games in a row. I like him this week at St. Louis for the price.

The new kicker in the Steel City paid big dividends last week, coming through big against Arizona. Pittsburgh will play in Arrowhead this week. I think Boswell will get a few opportunities to kick the ball.

One of the league’s best defenses gets its chance to show out on Sunday night at home against the Eagles. They’re undefeated, and that won’t change after Sunday night.