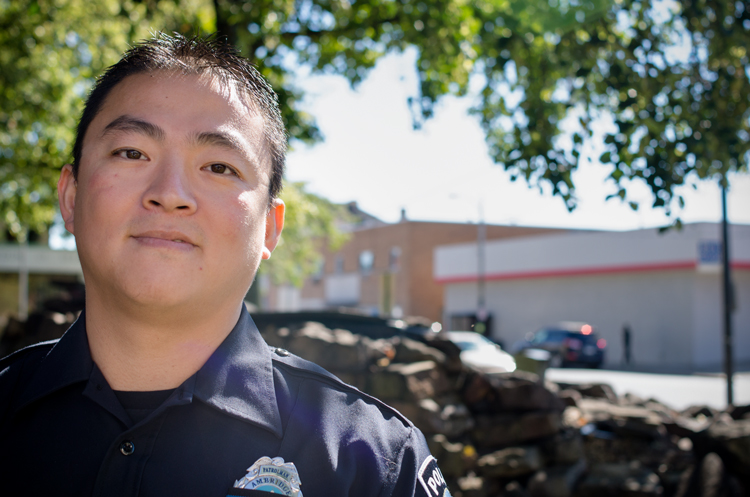 “We’re just getting started back again with the Crime Watch in the last few months. Our goal is to bridge that gap between the community and the police. Right now, I know there’s a lot going on where people feel fearful of the police, and we don’t want that. We’re here for them, you know? So our message is simple: Let’s work together to keep people safe.”

(Officer Jason Seng of the Ambridge Police Department talks about their efforts to strengthen the relationship between the police and community. The next Ambridge Crime Watch meeting will be held on Tuesday, Oct. 11th, 6pm at the Fire Department building).

Erin Ninehouser
Erin Ninehouser loves photography for its ability to reveal truths and insights that are often too difficult to capture with words. She believes, as Garrison Keillor says through his troubled yet triumphant character Barbara in Pontoon, that “the only sermon that counts is the one formed by our actions.” A native of New Castle, Erin has made her home in Ambridge where she lives happily with her wonderful husband Dave, their three adorable and hilarious cats, and their “old gentleman” dog, Max. Erin is excited to help tell the stories of the people of Beaver County. You can see more of her work on Facebook and connect on Instagram or Twitter.
 Share this article:  Facebook  Twitter
Two Beaver County Women Who Built a Friendship Through Consistent Exercise October 6, 2016 By Marc Grandinetti
0
Comments
Must See: Amazing 4 Bedroom Home in the Heart of Center Township October 5, 2016 By Andrew Selby
0
Comments