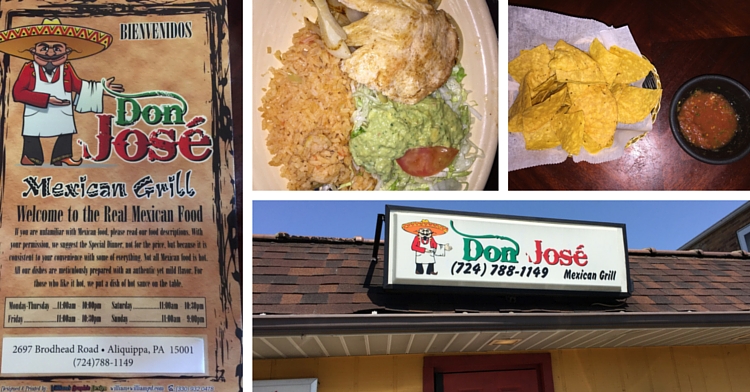 It’s not too often we get to write about new restaurants opening in Beaver County. There have only been a handful of new spots that have opened since we started this site a year and a half ago. I finally made a visit to one of those new places, Don Jose Mexican Restaurant.

Don Jose is located in the Sheffield area of Aliquippa, right on Brodhead Road next to Subway, and across the road from one of our favorites, Mac’s Donuts. Most readers will know the space as the former Mowad’s Mill City Inn.

At last count, we only have one Mexican restaurant (RIP Chi Chi’s) in Beaver County, and that’s El Paso in Chippewa. El Paso also has another location in Calcutta, Ohio. And if you go across the border into Leetsdale, you’ll find another Mexican spot, Azul Cantina. As a matter of fact, the same group that owns El Paso owns Don Jose. It is virtually the same exact menu and same exact food.

I’m a fan of Mexican, but who isn’t? So I wanted to give this place a try to let our readers know whether or not they should give it a go.

When I first walked in, I was a little taken back at the interior decor. I felt like I stepped into the 1980s. It’s not very big inside, and it’s poorly lit. It’s nowhere near as colorful as its sister restaurant, El Paso.

It’s dark and “dingy,” which would be a good adjective for it, if I am being honest. It resembles more of a bar than a restaurant, and that’s okay. Just know what to expect before you go. But my negative reviews end there.

Let’s Get to the Food

Upon sitting down, I was greeted by the waitress who brought the obligatory chips and salsa we are used to snacking on before the main course. The chips and salsa were perfect. I know, I know. It’s just “chips and salsa,” but I’ve become accustomed to the best from eating at El Paso. Speaking of, we had just ordered El Paso two days prior to my visit to Don Jose, so I actually ordered the same exact thing to compare the consistency and taste.

I had the lunch special #10, which is simply a chicken breast, onions, rice, lettuce, guacamole, tomato. I also added a chile relleno on the side. It sounds like a boring lunch, but I wasn’t disappointed. The food tasted exactly the same as my lunch on Thursday did from El Paso, and that’s a good thing. A little hot sauce and little more salsa mixed in my plate was a nice complement to the dish. The food was hot, tasty, and pretty on par with what I am used to.

Another drawback is that, unlike El Paso, they don’t serve alcohol. There’s a bar, but it’s for dining. However, it’s nice to know there’s a reliable Mexican spot within earshot of most Beaver Countians who live south of the river, or as I like to call it, the “LBC” (lower Beaver County). Prior to my visit, I couldn’t find a website or find many reviews for this place outside of a few on their Facebook page.

Of course, there will be negative reviews about any restaurant, but as long as it’s clean, the wait staff is friendly and attentive, and serves good food, I’m in. I don’t care that the interior looks weird. I’m there for the food. Don Jose hits on all of those.