Bob Petrella: The Man Who Remembers Everything 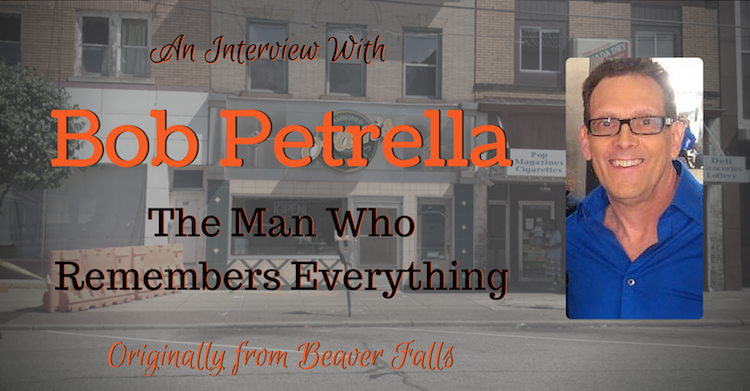 Extraordinary is defined as beyond what is usual, ordinary, or regular. Exceptional in character; noteworthy; remarkable.

Every once in a while, we meet people who are so extraordinary, we never forget them.

Five years ago, I was watching one of my favorite shows, 60 Minutes. During this particular episode, they profiled a small group of people who have what’s called Highly Superior Autobiographical Memory, or HSAM. There are only around 50 people in the entire world’s population (over 7 billion) that are known to have the ability to recall the details of every single day of their lives.

One of those people who was profiled in the original piece five years ago was Beaver Falls native, Bob Petrella. Petrella is certainly remarkable and quite noteworthy. He’s been profiled two more times since 2010 by “60 Minutes” correspondent Lesley Stahl for his unique ability.

Give him a date during his lifetime and he can recall what happened that day almost effortlessly and without hesitation. It is truly one of the most amazing, almost super-human abilities known to mankind.

People with HSAM are not autistic, and it is not photographic. Petrella, along with actress Marilu Henner, have a part of their brain known as the caudate nuclei that is seven times larger than the average person’s. Through research and MRI imaging, it has been determined this enlarged part of the brain is the origin behind HSAM in at least some of the people with this ability.

Growing Up in Beaver Falls

Like Lesley Stahl, I got a chance to speak with Bob about HSAM, growing up in Beaver Falls, his life as a producer in Los Angeles, and the Holland College Golden Knights. Never heard of the Golden Knights? That’s because they only exist in Bob’s head.

At some point in Bob’s life, he knew he had a gift. But it wasn’t until his teenage years that he really knew what he had. “I became aware in high school when I would speak to some school buddies about something that happened when we were younger.  When they wouldn’t remember the incident, I’d mention the date, and even the day of the week and they would just kind of look at me, like, ‘what are you talking about?’ Up until then, I always thought everyone had the same type of memory,” Bob told me.

Like Bob, my mom was born and raised in Beaver Falls. She always talks about how great it was growing up in the city, the popular downtown business district, attending St. Mary’s School, and then Beaver Falls High School, where classes averaged almost 500 students per grade.

I asked Bob what he misses most about his hometown and the glory days of Beaver Falls, and he echoed a lot of the same sentiments. He said, “I miss my friends that I still have there. Also when I grew up, the retail area of 7th Avenue was bustling. It was very vibrant with stores galore on every block. I think there were 10 clothing stores in downtown alone.”

In an article I wrote several months ago, I ranked my Top Five High School Football Coaches in Beaver County History. Legendary Beaver Falls coach Larry Bruno was #1. Given Bob’s ability to recall virtually everything, I asked him what he remembered most about Coach Bruno:

That he was an offensive genius, and he had so many quarterbacks who would go on to play at major colleges.  The obvious one is Joe Namath at Alabama (and of course the NY Jets).  But also Rich Niedbala who played at the University of Miami, Karlin ‘Butch’ Ryan who played at Iowa, Lou Cynkar at Cincinnati, Bill Ross who went on to Michigan, and Kevin Scanlon who was the signal caller at Arkansas.”

Moving Away from Home

After graduating from Penn State with a degree in Radio and Television, Bob moved to Los Angeles to pursue a career in the entertainment industry. He’s a now freelance producer, and has worked on shows such as “Ice Road Truckers” and “Deadliest Catch.”

Beaver Falls and Los Angeles are two completely different worlds. So when I posed the question of what he likes most about living in the City of Angels, his answer was not at all surprising:

Obviously the weather. As I tell people, it’s 75 degrees seventy-five percent of the time. Very seldom above 85 or below 65 the other twenty-five percent. But also the immense opportunities in so many avenues. And first rate entertainment such as concerts, comedy clubs, etc.”

After I got the geographical questions out of the way, I dove into what it was like being featured on “60 Minutes” on three different occasions.

Millions of people got to witness Bob using his ability, like when Lesley Stahl asked him the last time the Steelers played the Redskins and he was able to recall the date and score without any hesitation. Bob told me, “It has opened up opportunities – speaking engagements about my HSAM ability – at colleges and other places. Also interest from production companies and agents interested in representing me.”

Two of his more recent speaking engagements occurred in the past month at Santa Monica College and Loyola Marymount where he spoke to groups of students about HSAM. He even took questions from the audience as they tried to stump him on certain dates, but to no avail.

Bob embraces his ability and wants to share his story with the world. He doesn’t hide from it or feel embarrassed. Bob is an ambassador for HSAM.

When we think of being able to remember everything about every single day of our lives, we might believe this can only be a positive. It’s almost as if your brain is a time machine with the ability to travel back to any point in time in your personal history and recall how and what emotions you felt. But think about the negatives that this ability might bring along. Bob Petrella feels those negatives from time to time.

When I’m having a similar experience in the present that’s negative from something that happened in the past. For example, being delayed on a plane flight. I immediately think back to those instances that were similar (six-hour delay, for example), and feel like I may live through them again. I have to remind myself that it’s a different time, and the experience might not be the same.”

But for Bob, and presumably for the other 50 people who have HSAM, the positives outweigh and the negatives. When I asked him what the best thing is about being able to remember literally everything about his life, he said:

That I can go back in time to any period of my life and re-live the experiences (fortunately most of them good). I know exactly how I felt, what I was thinking, who I was with, etc. It’s kind of like having a time machine.”

(Side note: before this interview, the only time machine I ever knew existed was a 1985 DeLorean.)

Holland College and the Golden Knights

In his third feature appearance on “60 Minutes” that aired in April, Stahl and Petrella sat down to explore the Holland College Golden Knights. If you’ve never heard of the Golden Knights, that’s normal, because they don’t exist in real life.

50 years ago, Petrella was just a young kid growing up in Beaver County. He had a passion for Beaver Falls football, and it just so happened they were in the midst of a 23 game winning streak.

After the Tigers suffered a loss to snap the streak, Petrella, saddened by this loss, created a fictional town by the name of Tigertown, located 40 miles northwest of Philadelphia, the same distance Beaver Falls is from Pittsburgh. And the college in Tigertown was none other than Holland, home of the Golden Knights, a tribute to the Geneva College Golden Tornadoes.

For the past 50 years, Petrella has created fictional basketball teams with actual players and coaches. He’s played out entire seasons, recruiting processes, coaching changes, and has even tracked his players after they graduated.

The most remarkable thing about the Holland College Golden Knights is that Bob remembers every player, every game, every coach, and how every season ended. It is truly one of the most amazing stories I have ever heard of.

So, I asked Bob who are some of his all-time favorite players from the Golden Knights.

Probably Lou Wilson. He was a hometown boy from Tigertown who came back from Colorado and played at Holland and led them to the NCAA Division 2 title in 1970. Otis Pooky, another Tigertown product, is another. He was very athletic, three-sport star at Tigertown. Nicknamed ‘Dr. Magic’ after Dr. Julius Erving and Magic Johnson. He was a 6’6” starting forward in 1983.”

He’s even named players after friends of his, such as Neil “Bo” Jagger, in honor of two friends named Neil and Bo who were fans of the Rolling Stones. The play-by-play announcer is Bill Tronzo, named in memory of the late great sports journalist, Joe Tronzo, of the Valley News-Tribune and Beaver County Times.

I have a feeling the Holland College Golden Knights are on the verge of stardom. Someone, somewhere will have the vision to bring this school and its players to life. 50 seasons, over 250 players, different coaches, college championships, the list goes on. When America gets to know Holland College, Bob will be able to point back to his time growing up in Beaver Falls, and remind everyone how great of a place Beaver County really is. Go Knights!