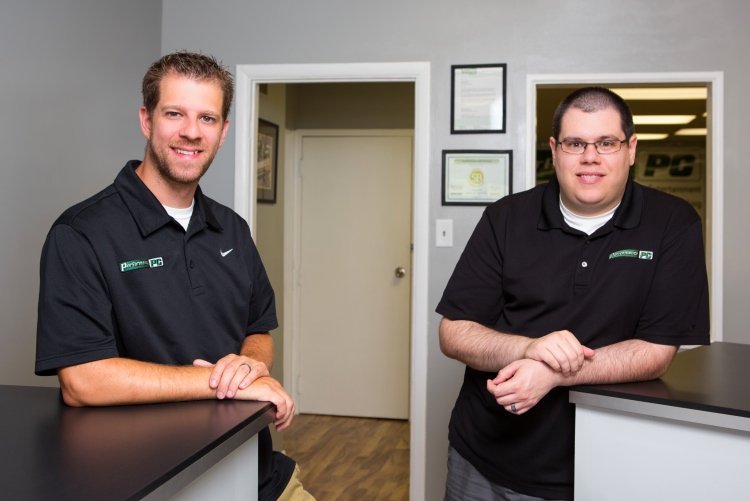 When I need a computer expert, Steve McCracken and Justin LaPearle from Performance PC are my guys. Over the past few years, they have built multiple work computers, installed and maintained a fancy restaurant POS system, cleaned all the junk off of my wife’s computer, and even saved the day by simply calming me down when the MacBook Air that I am typing on right now started making funny noises a few weeks ago.

I have known Steve personally for pretty much as long as I can remember, so naturally, when I heard he was starting up his own IT support services in Brisbane, I was destined to at least check it out. When I first walked into the original Performance PC store in New Brighton, I can remember being shocked by how clean and inviting it was. That was my first clue that these dudes were doing something different.

My interactions with both Steve and Justin over the past few years have done nothing but confirm that first impression. The incident that most sticks out in my mind is the Sunday morning that i called both of them on their personal cell phones for help with a computer emergency I was having at work. Performance PC is closed on Sundays, but before either Steve or Justin had even spoken to each other, they both called me back to let me know they were on their way to help me.

Getting out of bed and rushing to help a customer on what was supposed to be your day off is the type of service that creates lifelong customers. It’s also why Steve and Justin from Performance PC are a great fit to be interviewed for Your Beaver County. They are one of the many things that makes Beaver County such a wonderful place to live!

Performance PC is located on Brodhead Road in Center Township in the same plaza as C&S Sports. As soon as you enter the store, the first thing you will notice is how neat and clean the entire area is. When I arrived, both Steve and Justin invited me back into their work area, which was just as clean and tidy as the front of the store.

As we started the interview, Steve explained that he has always had an interest in taking things apart to see how they work. When he was younger, it was a normal thing for him to read a new VCR manual from cover to cover learning how each and every feature worked. Through his high school years, he spent a large portion of his free time working on his own computers.

As Steve began to consider career options, he knew that his interest in computers was leading him towards an industry that would continue to grow throughout the rest of his working life. After college, Steve took a position leading Circuit City’s new FireDog service team, which is where he met Justin.

Justin is the type of guy who can sit and talk about business ideas for hours. He had been working in sales at Circuit City, but jumped at the opportunity to team up with Steve to build Circuit City’s new FireDog team. This was the beginning of Performance PC, although neither Steve or Justin knew it yet.

The Catalyst That Started it All

You probably noticed that Circuit City isn’t around anymore. As Steve and Justin were working to build the service business there, pretty much every other aspect of the company was falling apart. The result of working in a failing company left Steve and Justin feeling frustrated and micro-managed. Eventually, the entire corporation folded and Steve and Justin were left unemployed.

One evening, shortly after losing their jobs, Steve and Justin were sitting at the Back Door Tavern in Fallston trying to figure out what they would do next. It was at that moment that Steve was struck with an idea. He said, “Let’s do this on our own. I think we can do it way better.”

The idea of building a business on repairing a PC outside of the corporate atmosphere that frustrated them at Circuit City was enough to excite both of them. It was the beginning of Performance PC.

With the idea of their new business in mind, they put Justin’s business background to work and wrote a business plan that covered every aspect of their new venture. However, despite having a thorough business plan and a proven track record in the industry, Steve and Justin were turned down for small business loans by one bank after another. They both expressed that this was the most frustrating part of their journey. Most of the banks didn’t even bother to read their detailed business plan.

In addition to their frustrations dealing with banks, they also had a difficult time finding a location for Performance PC. Based on their previous experience and relationship with potential clients, they believed from the beginning that their business would do best in Center Township, but they couldn’t seem to find a lease agreement that would work for them. Eventually, they settled on a location in downtown New Brighton and opened the doors of Performance PC for the first time!

As the new business began to grow, Steve and Justin noticed an interesting phenomenon that is unique to Beaver County: many people don’t like crossing the rivers. Despite the fact that New Brighton is less than 10 minutes from Center Township, many of their best potential customers felt like it was much further than that. In order to grow its client base, Performance PC would have to relocate to Center Township.

After moving to Center Township, business has really taken off for Performance PC. Steve and Justin both believe that their best strategy to grow the business is to impress every customer with an unparalleled level of customer service and then charge a fair price for that service.

As we discussed the level of service at Performance PC, Steve and Justin both pointed out that many computer repair stores are known for being dirty, cluttered, and dimly lit. Their competition consists of stores like that, big box stores where you have to deal with people who don’t remember your name, or some kid working out of his basement. They believe that there is a better option.

At Performance PC, Steve and Justin strive to offer the clean environment that you won’t find in most computer repair shops combined with a level of customer service that you won’t get from a big box store and a level of trust that you can’t possibly get from the guy working out of his basement. They offer the complete package, and that is evident by their extremely high customer retention rates.

The Future of Performance PC

It used to be rare for a home to have a computer. Now it is rare for a home to only have one computer. As our community continues to embrace technology, the business available to Performance PC is only going to grow. They are positioning themselves as the friendly, home-town guys that can help you out when one of your computers, smartphones, tablets, or TVs isn’t working like it should.

According to Steve, there is also great potential for them to develop more business working with other small businesses. He said, “I feel like there’s a lot of businesses that have a couple computers and don’t know how to utilize them.” He explained that it doesn’t make sense for a business owner to waste an entire day trying to fix a complicated computer issue. It makes more sense for that business owner to call in an expert and get back to focusing on running his business.

Speaking from my own experience, one of the biggest advantages of dealing with Performance PC from a business perspective is that you interact with the same two people every time you have an issue. The next time I have a problem at work and have to call Steve and Justin, I won’t have to give them all of the background information about the system, because they are the ones who built it, and they are the ones who have fixed every little issue that has come up over the years. They already know my computers inside and out.

Steve and Justin both commented that they see infinite possibilities for their business to continue to grow in the coming years. Their inspirational story is just getting started as they expect to continue serving local residents as the Beaver County computer repair experts for many years to come!

Have a technology issue that you could use a little help with?

Shoot us your name and number and we’ll have Justin & Steve give you a call!

Andrew Selby
Andrew is a professional freelance writer and lifelong resident of Beaver County. He created Your Beaver County to promote and showcase all of the positive aspects of our incredible local culture! You can find more of Andrew’s professional information at Brooklyn Content, or you can also follow him on his personal twitter account, @theAndrewSelby.
 Share this article:  Facebook  Twitter
Autumnfest at Old Economy Village September 9, 2014 By Andrew Selby
0
Comments
Beaver County Colleges and Universities September 7, 2014 By Andrew Selby
0
Comments