In the late 1950s, the American Library Association was concerned with society’s newfound interest in television and their loss of interest in reading. In an attempt to rectify this, they implemented National Library Week, which celebrates the library, the institution which brings us the opportunity of education and entertainment, for everyone, for free. We continue to celebrate not only the opportunities libraries provide us with, but everything they do for their communities, as well. This year, National Library week currently being held on April 9-15th and Beaver County libraries are celebrating their holiday by giving away prizes for any patron who selects one of their “lucky” items.

The Beaver County Library system began in 1971, which Andy talked about here, but most of them date from the 1910s and 1920s. Not only have they provided the county with access to hundreds of books to borrow, but they also provide residents with free access to the internet, audiovisual entertainment, as well as various activities and educational programs for all ages.

An example of one of the most popular activities hosted by a local library is the American Girl Doll Tea Party at the Laughlin Memorial Library of Ambridge. The tea has been entertaining local girls for three years and has been a huge success. 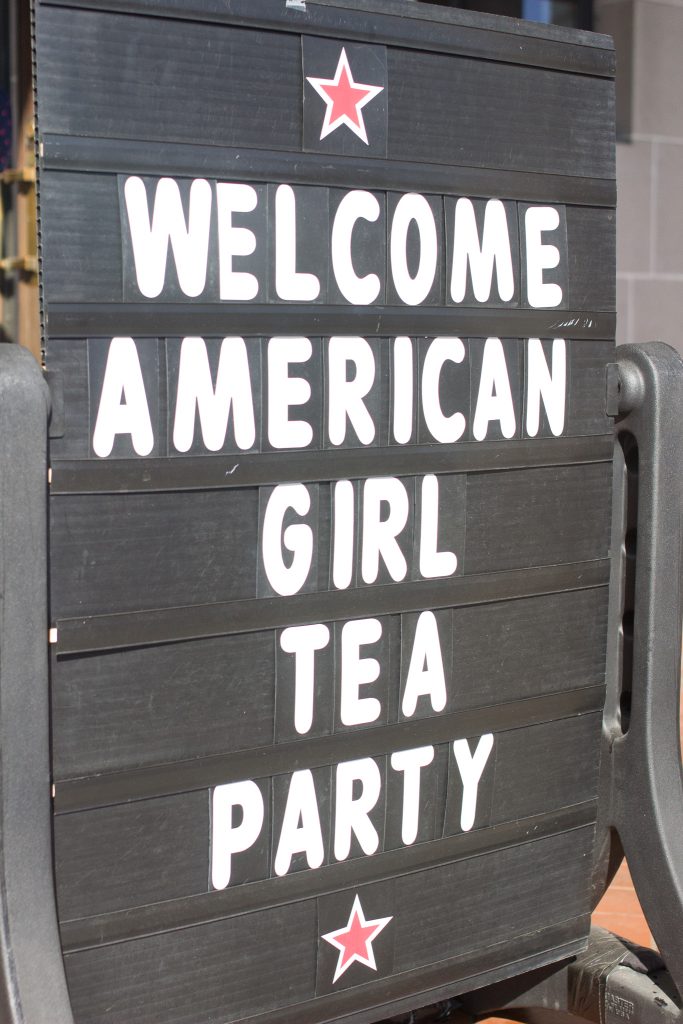 In the early afternoon of Sunday, February 19th, local young girls and their dolls, lined the library stairs and down the sidewalk. Many dressed in matching outfits, held their dolls, and chatted with their moms and friends. Swirling their dresses and their dolls, they were looking forward to an afternoon of fun filled with crafts, food, and even the opportunity to win an American Girl doll.

Julie Mulcahy, director of Laughlin Memorial Library, donning her favorite tea hat, buzzed about the main room of the library, organizing the event. Dressed as American Girl dolls, local high school students acted as guides and hosts. Two of the Ambridge students, Taylor Mealie, a senior, who was dressed as American Girl doll, KananiAkinaand Samantha Freed, a sophomore who both had volunteered their Saturday to help. 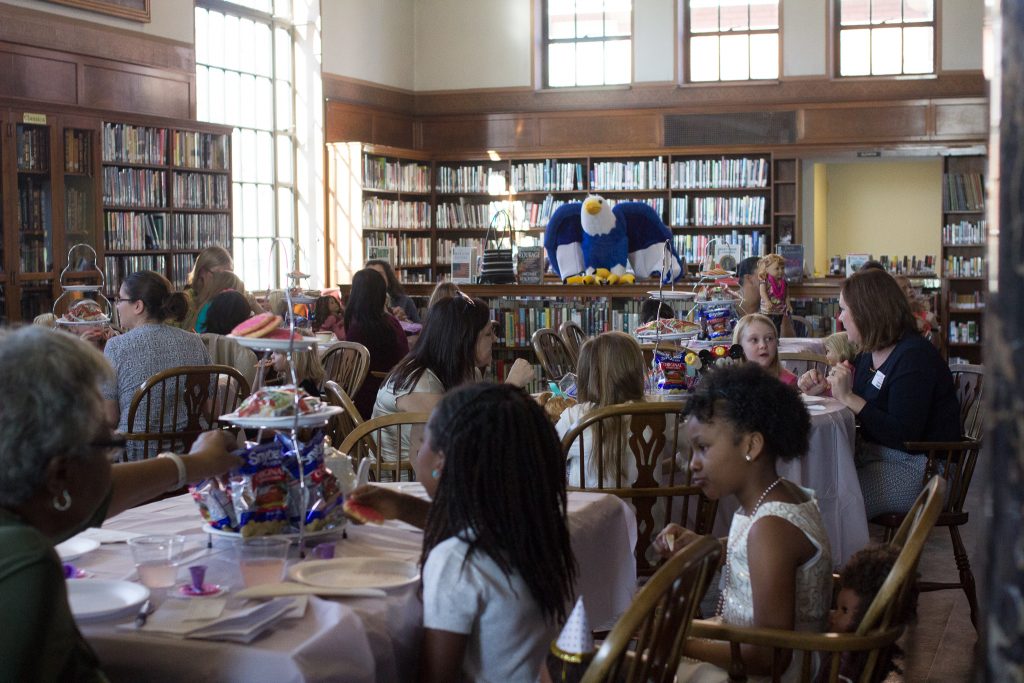 According to Jackie, one of the many staff members vital to the activities’ success, they were anticipating roughly 142 guests, 70 of which were young girls, who, on average, ranged in age from 3.5-8 years old. Due to limited seating and how quickly the activity sells out, they urged participants to pre-register. This year’s ticket prices were $20.00/child; $10.00/adult. They could win prizes, even Isabelle, an American Girl Doll. She explained that this wasthe idea of board member, Ginny Reed and that since her suggestion; they have been doing this for almost 3 years now.

The majority of the entertainment took place in the large main library, which was filled with tables packed with goodies like chips and cakes, piled high on tiered platters.Each place setting with complete with a tea cup and saucer for both the guest and their doll. Long tablesshowcased different prizes to be won, such as Isabelle, other doll goodies like doll clothes, brushes, etc.

There were stations set up throughout the large room, for example, there was a life-size American Girl Doll box where girls could pose to have their picture taken, or another station where they could receive a necklace, or receive their raffle tickets for all the goodies. The craft was set up downstairs in the children’s library, where the girls made their own purses, out of donated fabric from a volunteer, according to Jackie, who was a local retired Home Economics teacher. For girls who were just a little too young to make an attempt at making their own purse, there was another age appropriate activity for them, as well. 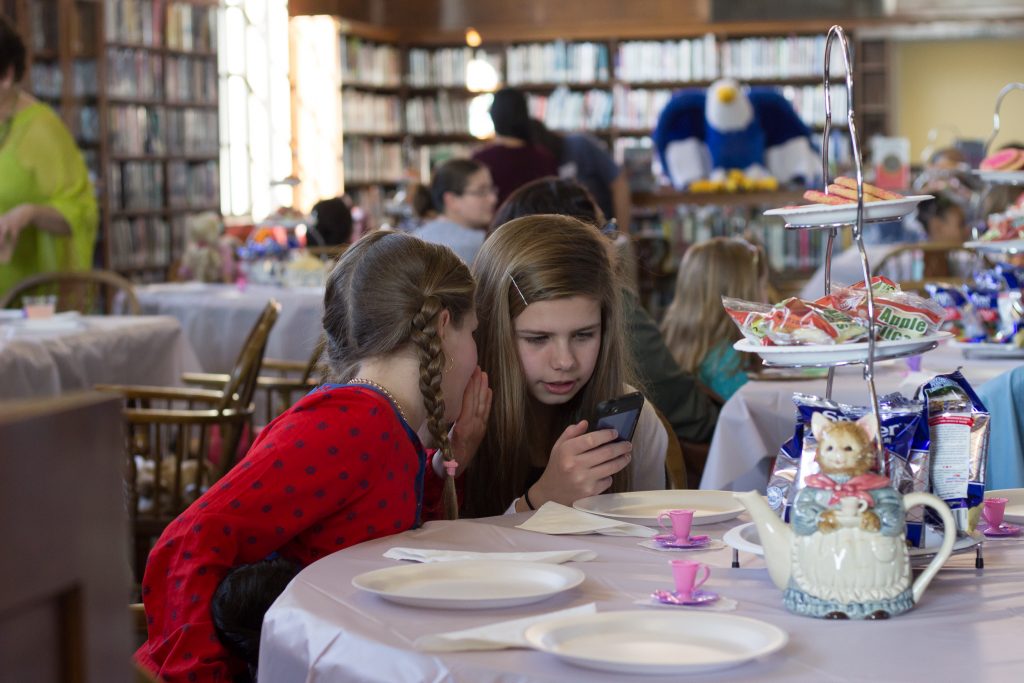 Jackie shared that due to the event’s continued success, Julie, the director, had suggested beginning other American Girl themed activities for other times of the year. If this event or others like this, is of interest to you, please contact Julie or Laughlin Memorial Library for more information. You can also check out their Facebook page.

The Ambridge Free Library was established on July 6, 1929and funding for the building and its formation was providedby the Laughlin Family. It was a gift and memorial for their son, Alexander Laughlin, Jr. The library was later dedicated and renamed in their honor to the Laughlin Memorial Library. The library is beautifully constructed, with large marble columns, which are rumored to be, “the largest monolithic columns of this type in the world.” A cornerstone of the community, Laughlin Memorial Library provides Ambridge with year-round activities and services. This library is just one example, throughout the Beaver County Library system, who improves the lives of their local residents every day.

Whitney Scelp
Born and raised in Beaver County, Whitney graduated from Geneva College, is a nurse at the local hospital, and still resides in the area. She is looking forward to training her daughter in the ways of Beaver County…such as Hot Dog Shoppe chili dogs, Midland Fourth of Julys, and pierogies. Follow her on Instagram @wandering_wannabe for her local and not so local favorites.
 Share this article:  Facebook  Twitter
Beaver County Auto Sales Person of the Month: Phil Tyler April 19, 2017 By Marc Grandinetti
0
Comments
Easter Devotional - Pastor Jeff Arnold April 16, 2017 By Ana Beaverhausen
0
Comments