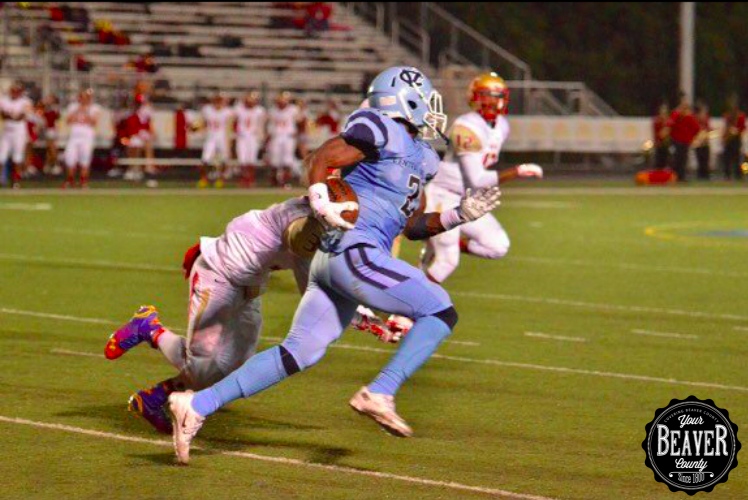 And then there were two. As in two teams left that will represent Beaver County in the “final four” of the WPIAL playoffs. As expected, Aliquippa and Central Valley advanced, while South Side and Riverside saw their seasons come to an end. Let’s revisit the quarterfinals.

South Side Beaver got on the board first thanks to a 73 yard touchdown run by their bell cow, Nathan Block. The upset-minded Rams led the #1 seeded Cardinal Wuerl North Catholic Trojans 6-0 after one quarter of play. Then Trojan star P.J. Fulmore took over from there, running for three unanswered scores and advancing to the semis with a hard-fought 20-6 win.

South Side accumulated all 154 of their total yards on offense on the ground, with Nathan Block running for 117 of them, but two Ram turnovers – a fumble and an interception – proved costly. South Side should be commended for an incredible season after going winless last year. Cardinal Wuerl North Catholic will now take on Avonworth in the semifinals.

The Riverside Panthers also bowed out to the higher seeded Avonworth Antelopes, 31-14. Avonworth dominated the line of scrimmage, running for 258 yards while holding Riverside to 43 yards on the ground. However, most of Riverside’s offense came through the air, with Jason Dambach going 16 for 30, 274 yards, two touchdowns and three interceptions. Avonworth jumped out to a 14-0 first quarter lead and never looked back, leading 21-0 at halftime and 28-0 after three quarters. Logan Sheridan caught both touchdown passes for Riverside.

#2 seeded Aliquippa breezed to victory in their quarterfinal rematch with Mount Pleasant, coasting easily 40-0. Kaezon Pugh ran for five, yes five, touchdowns, including runs of 50 and 53 yards. Jassir Jordan added the other touchdown. The Quips ran for 352 yards, while holding Mount Pleasant to only 111 yards of total offense. Pugh accounted for 193 yards on the ground. They will now face the Washington Little Prexies in the semifinals.

The Central Valley Warriors spread the love around on offense, posting 41 points en route to a 41-14 victory over the Indiana Little Indians in the second round at Butler. QB John George threw for 113 yards and three touchdown passes to three different receivers – Kurt Reinstadtler, Joe Shively, and Jordan Whitehead.

Whitehead added 135 yards and two more touchdowns on the ground, and Kyle Vreen capped the scoring for CV in the 3rd quarter. Central Valley will now face 5th seeded Ringgold, who defeated Hampton in overtime, in the semifinals. This is the 5th consecutive trip to the semifinals for the Warriors.