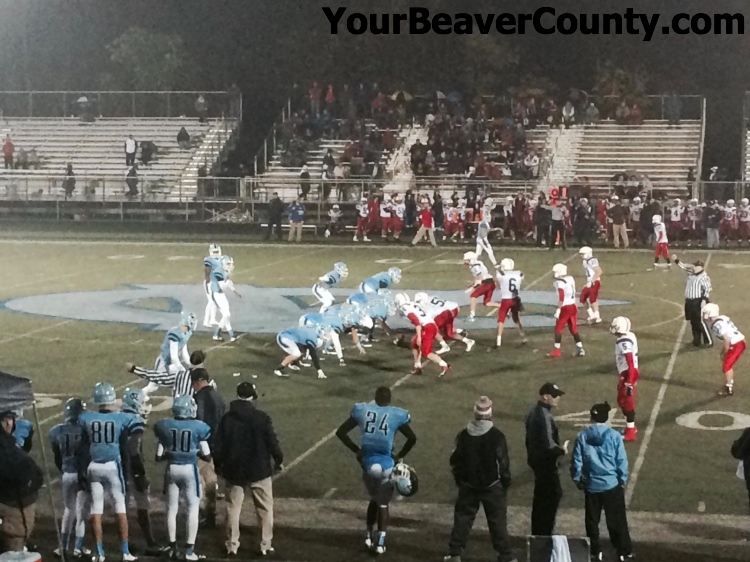 There were plenty of tricks, and not so many treats, in week 1 of the WPIAL playoffs, especially in games involving teams from the MAC Conference. MAC teams suffered three heartbreaking defeats, and Beaver County teams overall went a collective 4-3 during round 1. Let’s take a look at what went down on Halloween.

Two of the more compelling storylines in the County are the resurgence of the Riverside and South Side Beaver football programs. Both schools continued their 180 degree turnaround with impressive wins in the first round of the playoffs.

South Side got a monster effort from their star, Nathan Block. Block ran for 200 yards, two touchdowns, and added a pair of interceptions en route to a 26-12 win over Frazier. The Rams jumped out to a 26-0 lead and cruised the rest of the way. Cameron Smith and Robert Heberle also added touchdowns for South Side. Their reward for winning their first round game? A second round date against defending WPIAL and PIAA champ Cardinal Wuerl North Catholic.

The Riverside Panthers made the long trek to Beth-Center, and came away victorious, stunning the higher seeded Bulldogs, 21-20. QB Austin Dambach’s touchdown pass to his brother, Jason, proved to be the decisive score. Riverside kicker Cortney Harden was clutch as well, converting all three of her extra point attempts. Riverside recovered a late Beth-Center fumble in the end zone for a touchback, and ran out the clock from there. Riverside will now take on 4th seeded Avonworth in the second round.

Beaver County teams suffered all three of their playoff casualties in the AA bracket. Beaver, Beaver Falls and New Brighton all lost, while Aliquippa rolled to victory as expected.

The 2nd place, and higher seeded Bobcats, led South Park 20-7 at Pat Tarquinio Field before things went awry for Beaver. Darius Wise left the game in the 3rd quarter with an ankle injury and did not return. The Eagles then outscored Beaver 14-0 the rest of the way. The Bobcats mounted one final drive, getting down to the South Park 1 yard line with under a minute to play. They then attempted the game winning field goal as time expired, but the kick was blocked. South Park will now play #1 seed South Fayette in the second round.

New Brighton made the trip to Highlands, but came away empty handed, losing 24-19. The Lions, who trailed 14-0 early on, outscored Highlands the 19-10 from that point on, but it wasn’t enough. Highlands will now face Seton-LaSalle in the second round.

Beaver Falls also logged some serious mileage, traveling to Apollo-Ridge. The Tigers and the Vikings engaged in a four quarter shootout. BF didn’t have the firepower to keep up with Pitt recruit Tre Tipton, who scored twice, and his teammates, losing 58-40. Five Beaver Falls turnovers ultimately proved to be costly. Derrell Carter added two touchdowns for Beaver Falls, whose season ended at 7-3. Apollo Ridge will take on Washington in round 2.

The lone winner in AA was Aliquippa. The Quips racked up 439 yards on the ground, and won going away, 55-20, over Kittanning. DiMontae Bronaugh, Kaezon Pugh, and Anthony Barton combined for six touchdowns. All three backs had over 100 yards rushing. Aliquippa will now face Mount Pleasant in the second round, a team they destroyed in week 8, 63-14.

Central Valley’s Jordan Whitehead put on a clinic at Sarge Alberts Stadium, rushing for 277 yards and three touchdowns on only nine carries, along with a 75 yard kickoff return, leading the Warriors to a 48-26 first round win over Laurel Highlands. The Warriors jumped out to a 34-0 first half lead before easing up. The second half opened up into an offensive display by both teams. Laurel Highlands outgained Central Valley, 533 to 459 in total yards. Central Valley (10-0) advances to the second round where they will face 8th seeded Indiana.