Marc's Take on The Top 15 Most "Burgh" Vacation Spots 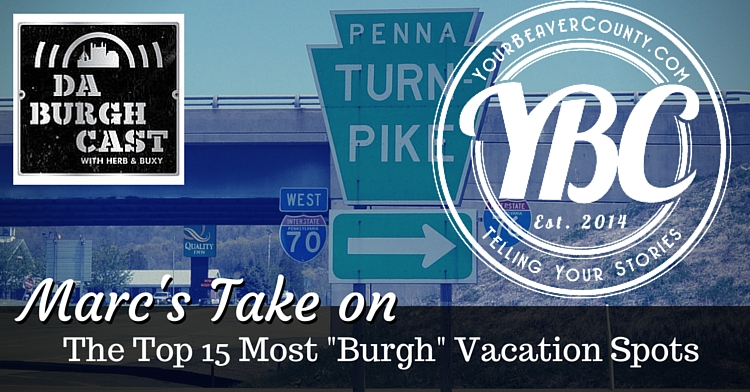 Our friends, Herb and Buxy from “Da Burghcast,” listed their top 15 most “Burgh” vacation spots in their latest podcast. I thought I would break down their list and pick apart which Burgh vaca spots are too high, too low, or simply left out.

So instead of debating the world’s problems around the dinner table this Thanksgiving Day, why don’t you debate the best “Burgh” vacations spots from Herb and Buxy?

Only a four hour and a half hour drive from the County of Beaver, Niagara Falls is a thing of beauty. It showcases the immense power of Mother Nature. Herb and Buxy list the American side of Niagara Falls as #15 on their list.

The American side is also where you can ride the “Maid of the Mist,” a ferry boat tour that allows you to get up close and personal with the Falls. For people without passports, this is a good place to visit, spend the night at the Seneca Niagara Casino, and hit the blackjack tables.

O Canada! A short ride over the Peace Bridge from the U.S. of A. into Canada is Niagara Falls, Canadian side. I haven’t been to the Canadian side since I was around 20 years old.

In Canada, the legal drinking age is 19, so this is a popular spot for the 19 and 20 year olds to come and indulge in the various bars on Clifton Hill. The Fallsview Casino Niagara overlooks the falls, and has tons of options for the gambler in you.

Speaking of gambling, Mountaineer Racetrack and Casino checks in at #13. Before the Rivers and the Meadows, western PA gamblers had to cross the border into West “by God” Virginia.

I remember when they just had slots, and that was a big deal. My best memory of Mountaineer is when I got to meet many members of the Sopranos when they visited there in 2003: Michael Imperioli (Christopher Moltisanti), James Gandolfini (Tony Soprano), Steve Schirippa (Bobby “Baccala”), and Tony Sirico (Paulie “Walnuts” Gualtieri). Take the less than 45 minute ride to get “wild and wonderful” in Chester, WV.

Da Burghcast guys have Hershey Park and our state capital, Harrisburg, as a combo for #12. This is another four hour drive from Beaver County.

And then we have its neighbor to the east, Harrisburg. I’d much rather visit Hershey Park for a little vaca than Harrisburg. Let’s leave this one off the list next time, guys!

Good ole’ Lake Erie makes an appearance at #11. Herb and Buxy didn’t specify what part of Lake Erie, obviously in PA, but they did mention the beachy part. The Lake Erie beach is what a lot folks that grew up in Beaver County remember as their first beach experience, especially our baby boomers.

Keeping with the theme of casinos, Presque Isle Downs is located in Erie, and has become a regional tourist attraction for those looking to lose some money.

At #10 is our region’s most popular ski destination, Seven Springs. This resort is actually owned by Pirates owner, Bob Nutting, so I’m not crazy about this being on the list, but I understand why.

Seven Springs is about a two hour drive from the County off of the Donegal exit on the turnpike. Their peak season will be in full swing very soon, as the skiers and snowboarders take to the slopes.

Cedar Point has to be on the short list for greatest amusement parks in the United States, if not the best.

They have a ridiculous amount of sick roller coasters such as the Millennium Force, Raptor, Top Thrill Dragster, Magnum, Wind Seeker, and new for 2016, Valravn. Valravn will be the world’s tallest, fastest dive roller coaster.

Cedar Point also has a water park and tons of other activities to do for old and young alike. At only two and a half hours from home, this is a must-visit for the thrill seekers out there.

I’m not quite sure how or why Breezewood made the list, because the only time I’m in Breezewood is when I’m traveling to another destination and I need to use a restroom. Breezewood is a conglomeration of convenience stores, fast food restaurants, and gas stations.

I would venture to say most Beaver Countians who are traveling to the Jersey Shore, Ocean City, MD, or other points on the east coast have stopped in Breezewood to empty their bladder, grab a bite to eat, and get a fresh cup of coffee.

Idlewild and its companion, Soak Zone, make this the most kid-friendly destination on Herb’s and Buxy’s top 15.

Idlewild’s fabled “Story Book Forest” gives kids a chance to see their favorite story book characters come to life. This is like the Magic Kingdom of western PA, and it’s only less than two hours away in Ligonier.

Home of the Pro Football Hall of Fame, Canton is in northeast Ohio. Thousands of yinzers made the trek to Canton this past August to see our very own Jerome Bettis get enshrined into the Hall.

You can spend an entire day in Canton at the Hall of Fame. It’s a museum that also features several Beaver County guys, like Joe Namath, Tony Dorsett, and Mike Ditka.

Man, talk about a throwback! Geauga Lake in northeast Ohio and White Swan Park right across the border in Allegheny County.

The next time you are traveling down I-376 and approach Robinson, look off to the right in the area of Montour Run. That’s where White Swan Park used to be, and its “big” roller coaster, the Mouse. It was open from 1955 to 1989, when it closed to make room for an expanding Parkway West and Robinson Township development.

It was pleasantly surprising to hear the guys mention this one!

The final four of the top 15 really hit home for me. Pymatuning is where we used to spend a lot of our summer vacations as kids.

In our family, we had a great-aunt and great-uncle who owned a cottage in Pymatuning. We used to fish for walleye on their pontoon boat, play bocce in the yard, visit the animals at Deer Park, and spend time with family. We thought it was the greatest thing in the world!

The spillway is still a “thing” in Pymatuning, where tourists can feed the thousands of carp who readily want the stale bread you throw them. Pymatuning is a throwback destination, and very much a “Burgh” destination for those in western PA.

Ocean City, Maryland, is where my parents took me and my sister on our first vacation. With that being said, this place will always have a special place in my heart. It is probably the closest ocean destination to us folk in Beaver County, some seven hours away.

It’s not at all “upscale” or anything like that, but it is very expensive. One of the hallmark tourist attractions for adults is Seacrets, the infamous bar where partiers float in rafts in the bay and sip their favorite beverage.

There are tons of activities to do in Ocean City, from golfing to the walking the Boardwalk. Like the guys said in the podcast, they also have some great saltwater taffy!

Herb and Buxy went all yinzer on us and picked St. Vincent College, and somehow tied it with Bradenton, Florida, to make it #2 on the list. Guys, this is way too high for a college with a monastery and a beach that is about 20 hours away!

While both are beautiful in their own right, they should be a little lower on this list.

Kennywood is classic Americana. It is as throwback as an amusement park as you can get. Growing up in western PA, Kennywood has given us so many memories. From Kiddie Land to the Phantom’s Revenge, Kennywood has something for everyone. I think I speak for everyone when I say the Potato Patch fries are some of the best ever. Kennywood continues to shine as a place where we can go and be a kid again.

Ok, so now that I broke down the top 15, what did Herb and Buxy leave off? First, they left off Kennywood’s sister park, Sandcastle. What kid doesn’t love Sandcastle? It’s as good as a water park as you will find within a few hours of the city.

Settler’s Cabin Wavepool. Along the same lines as Sandcastle, the wavepool is the place to be seen during the summer if you’re in grades 7-12. It’s in Robinson, and they have a high dive that takes some courage to jump off of.

Put-in-Bay, Ohio, was somehow left off! As I like to call it, the “Cancun of Ohio,” Put-in-Bay has some of the best swim-up bars I’ve ever seen. It’s literally in the middle of Lake Erie, only miles from Canadian waters. Put-in-Bay is a great weekend destination for Beaver Countians, especially if you like to party.

Herb and Buxy also left off Gettysburg, another place that’s about the same distance away as Hershey or Harrisburg. Gettysburg is home to the famous battlefield that saw thousands of Union and Confederate soldiers give their lives for this country. This is the place to learn about history and honor those who fought in one of the greatest battles this country has ever seen.