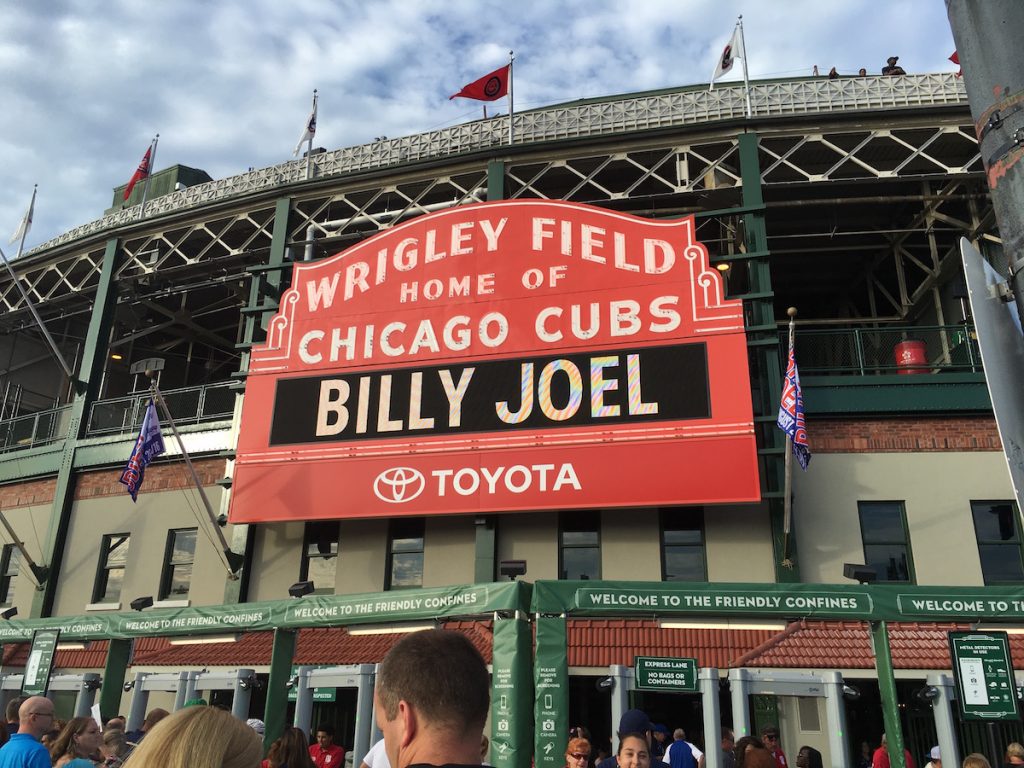 So Mrs. YBC and I spent the past weekend in Chicago. Our primary objective for this trip was to see Billy Joel at Wrigley Field, which was absolutely fantastic. But our secondary objective was equally amazing…and that was investigating as many local eateries as we possibly could over the three days we spent there.

Here’s the thing I love about Chicago. We were able to get two round trip tickets from Southwest for less than $200 per person…plus no bag fees! (Thanks, Jim Woods!!!) Then, we were able to take the train from the airport to our hotel…and everywhere else we went for a total of about $20 all weekend. As if that wasn’t great enough, we stayed at a very nice Comfort Suites right in the heart of The Loop for about $200/night. As far as weekend getaways in major cities, I’m not sure it gets any cheaper than that!

So since we felt like we were miles ahead of the game thanks to our discount airfare, transportation, and lodging, we decided to spend as much as we could on stuffing ourselves silly with delicious food. And that we did. 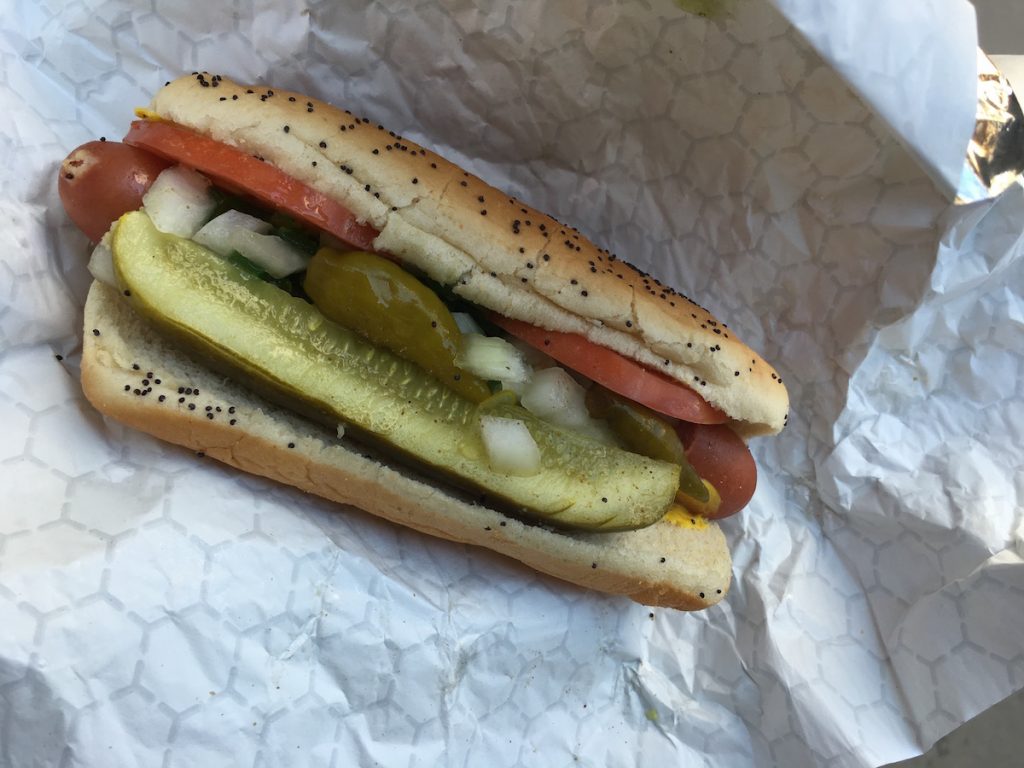 Mrs. YBC has a thing about mustard, so I got in a bit of trouble for this one…but it was definitely worth it. This delicious specimen was from U.B. Dogs at the northern end of the Loop. It’s a really cool, quick service place kinda like subway that had my dog ready before I even finished paying. 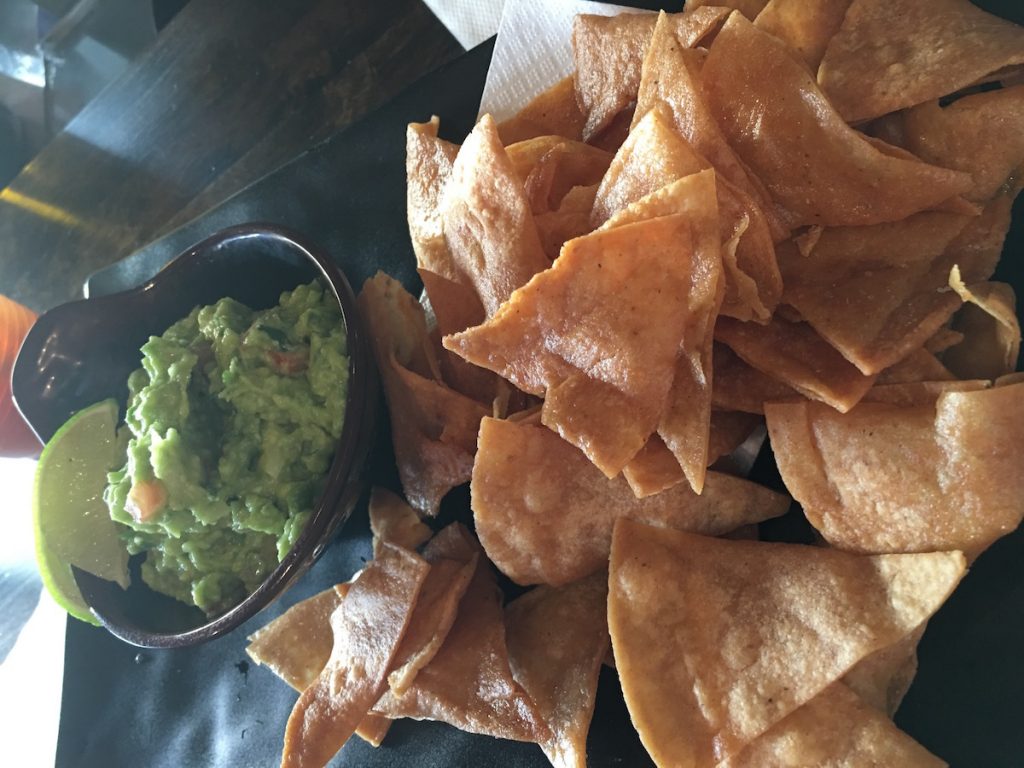 Before the concert, we stumbled into a place called NOLA in Wrigleyville that served this homemade guac and chips. This might have been Mrs. YBC’s favorite. 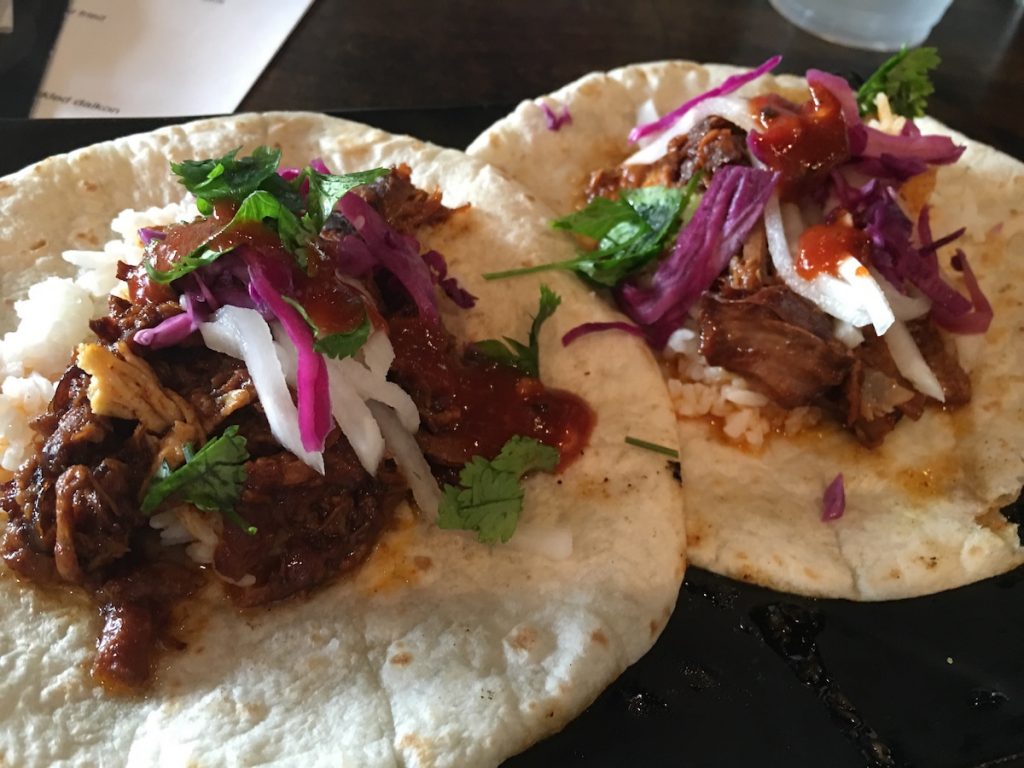 I also got some pulled pork tacos at NOLA and they were very good too. 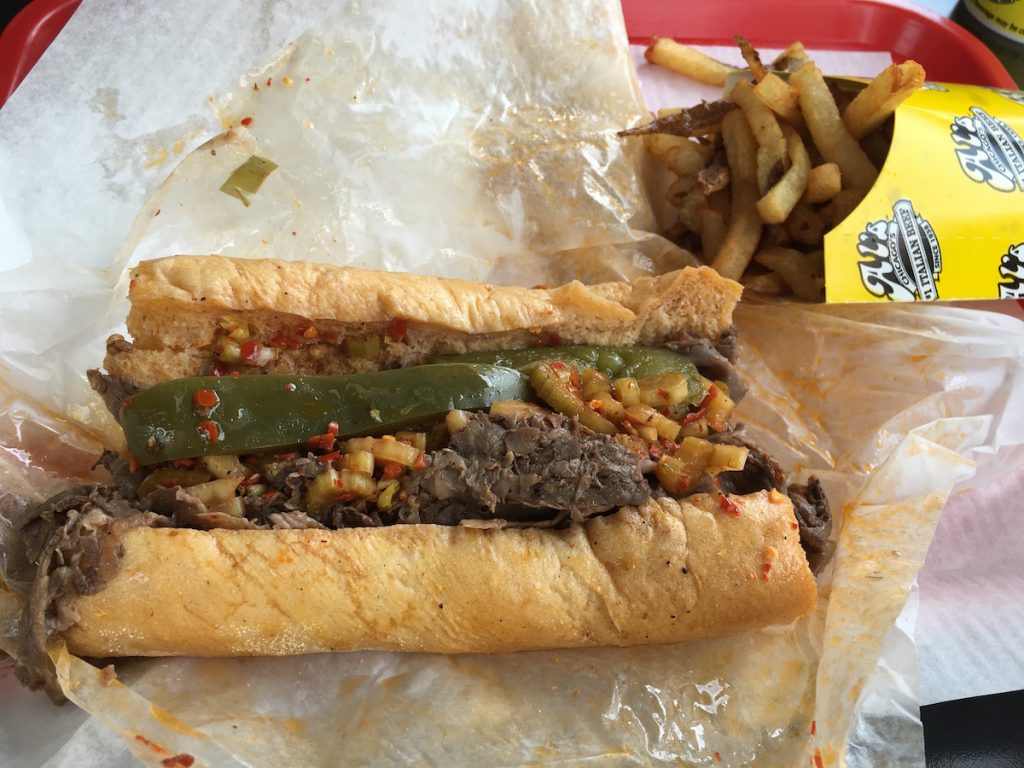 We started off our Saturday in the city with a trip to Al’s Italian Beef. I had had one of these before and didn’t remember it being that impressive. But I’m thinking it’s because I didn’t get the sweet peppers and giardiniera, because with those it was fantastic. At this point, Mrs. YBC changed her mind and decided this was the best meal of the trip. 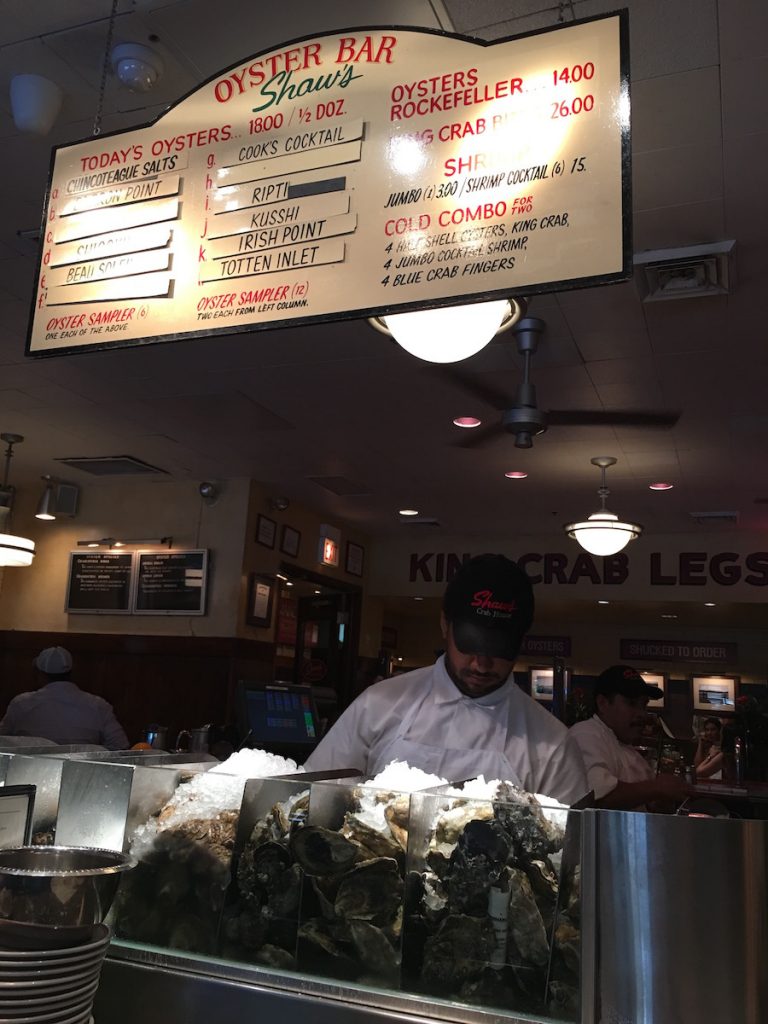 A little later in the day, we stopped into Shaw’s Oyster Bar, where we were treated to one of the most fascinating oyster experiences I’ve ever had. Shaw’s has oysters from all over the east and west coasts, and when you order a sampler there, they point out where each individual oyster is from and give you a menu that explains the unique tastes you will notice in each one. This was so cool. 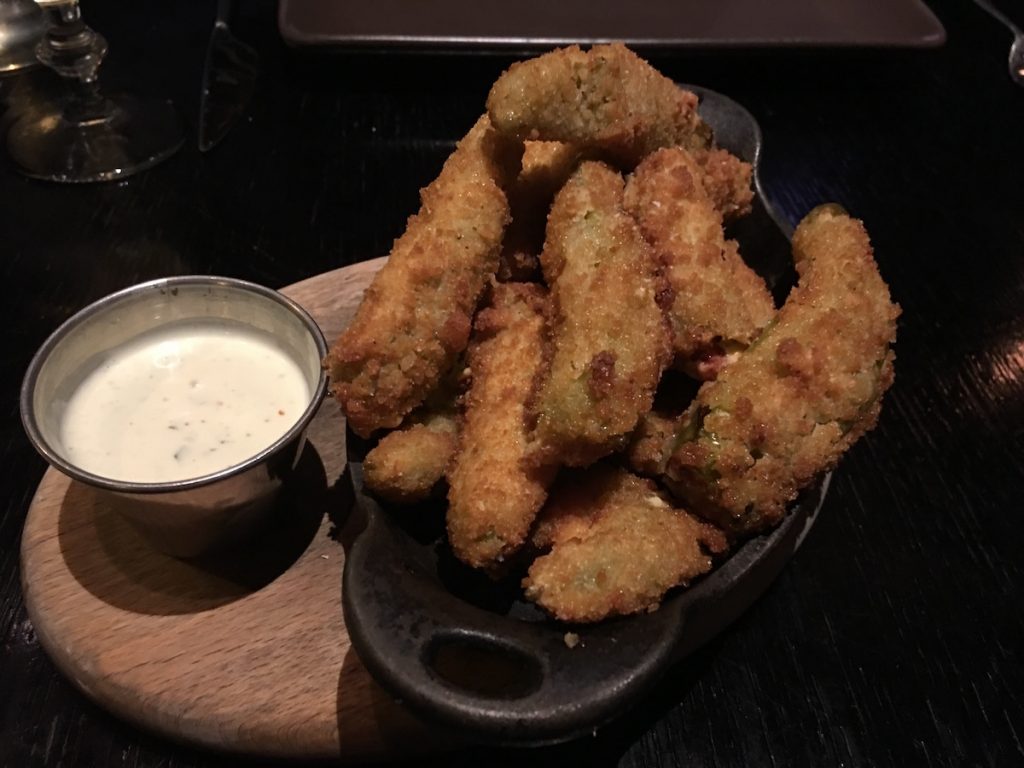 Later that evening, we had a reservation at Sable, which Yelp listed as one of the best tapas restaurants in town. Seeing as we obviously like to try a lot of stuff, tapas restaurants always suite us well on our travels. This first dish was a homemade popper with a sweet pepper and an avocado ranch dipping sauce. 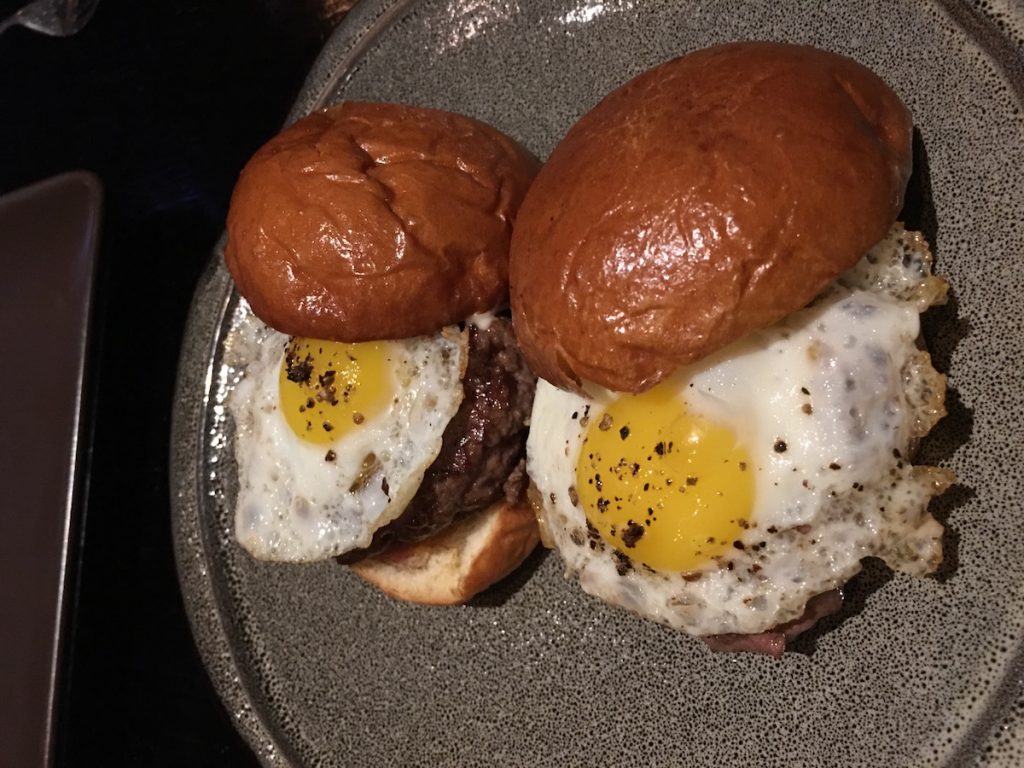 We followed the poppers with these Wagyu beef sliders topped with quail eggs. They were really adorable. 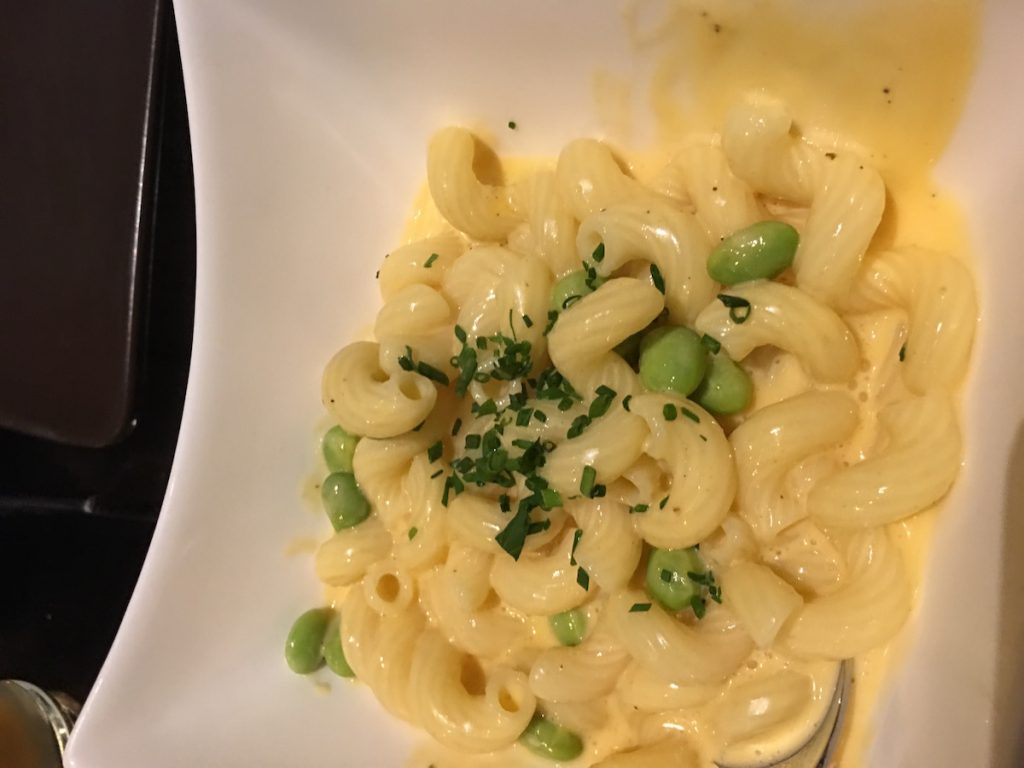 This mac and cheese had hints of dijon mustard, and those little edamame bites added a really cool texture. 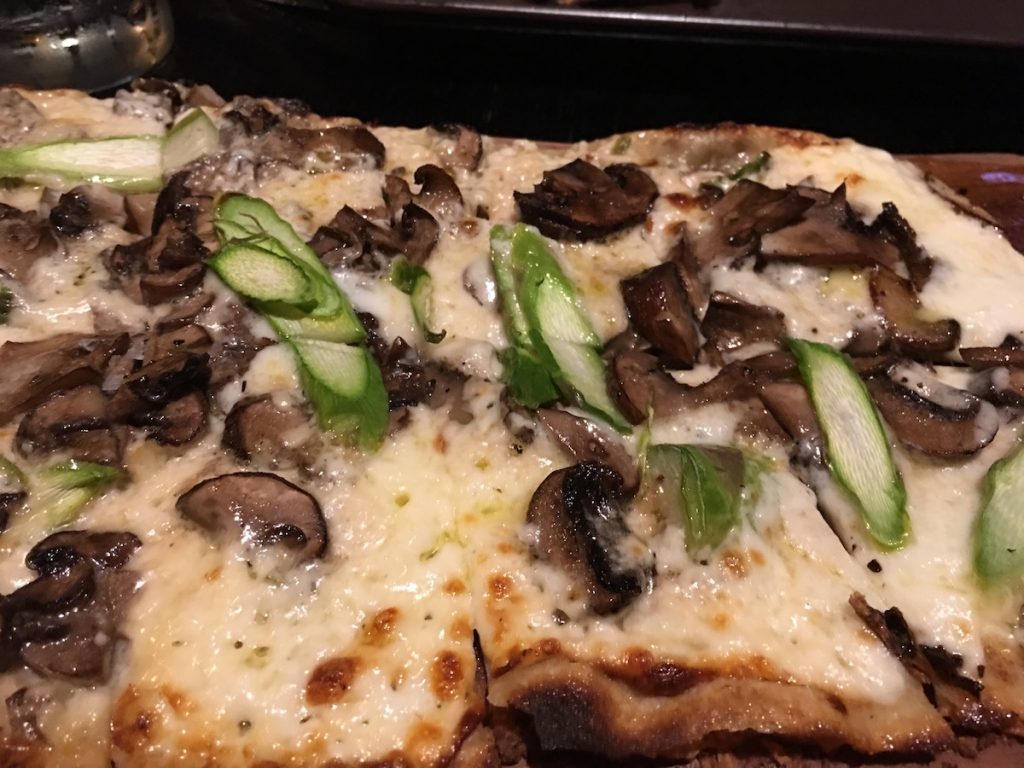 The star of the show at Sable for the Mrs. was this shiitake mushroom and asparagus flatbread. 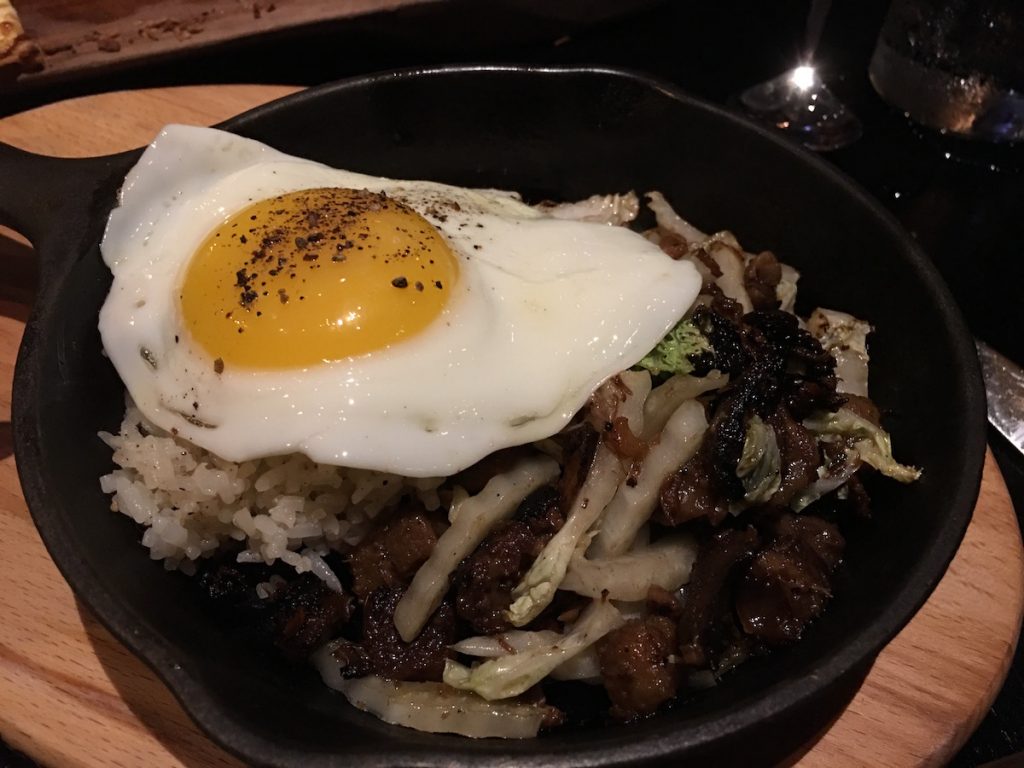 I was a little more adventurous than her and ordered the grilled pork cheeks topped with a duck egg. This was, by far, the most interesting dish of the trip. 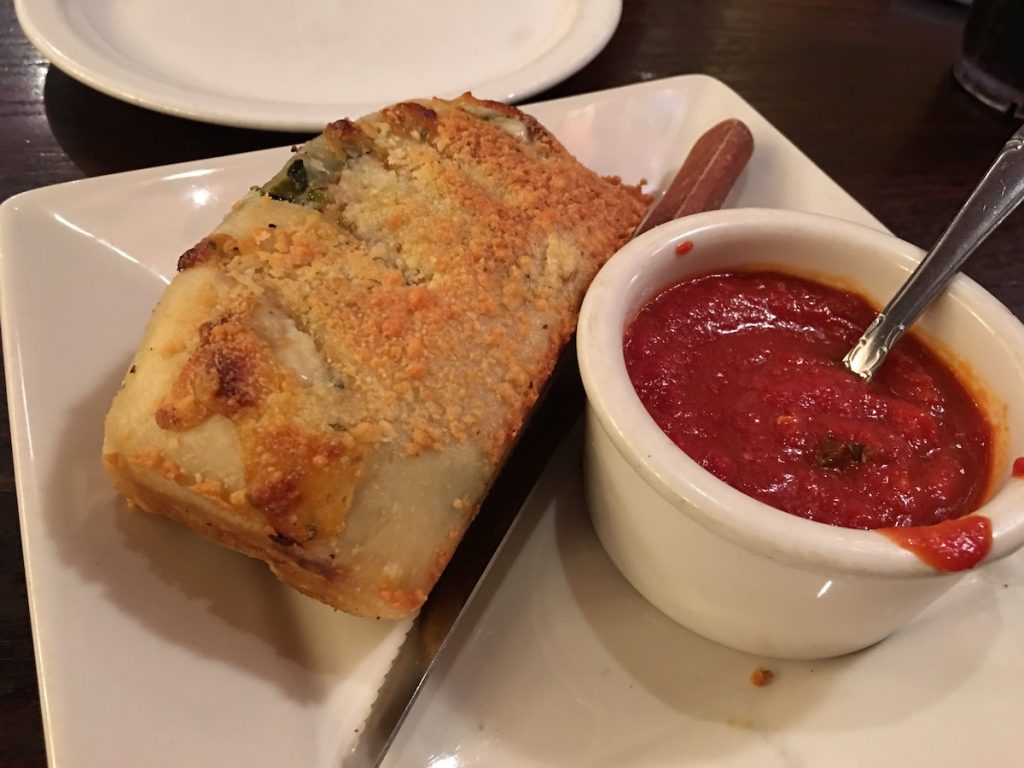 We were right back at it on Sunday with a trip to the famous Lou Malnate’s for some deep dish pizza. But before the pizza, we started with this stuffed spinach bread appetizer. 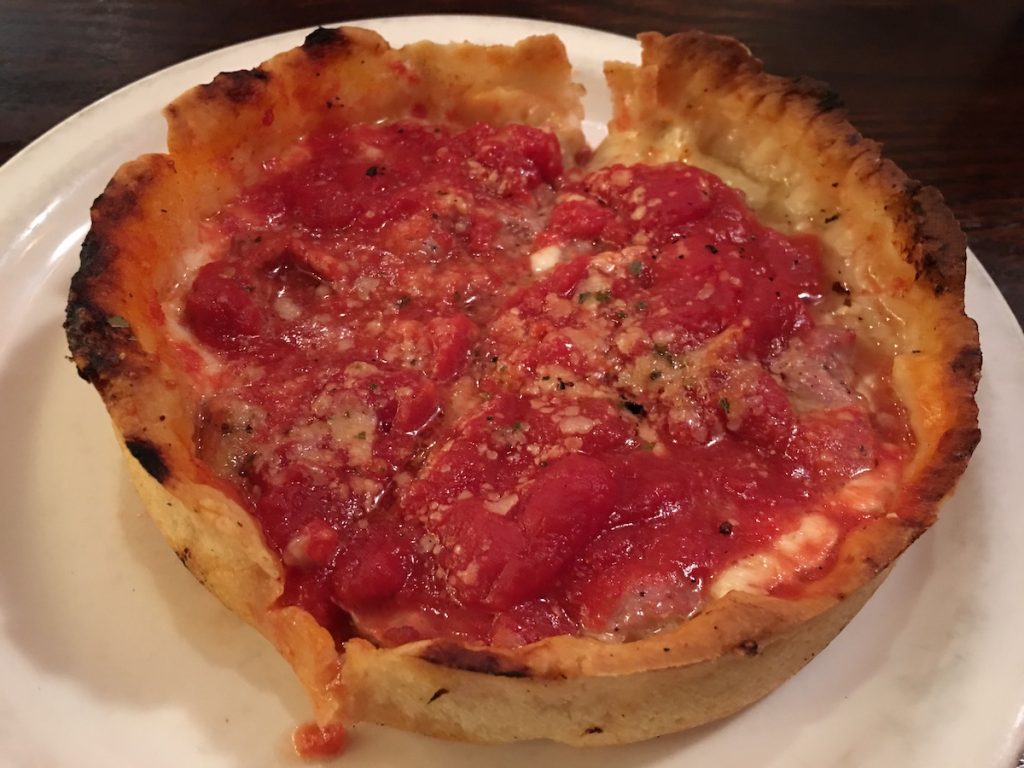 I got the classic Chicago deep dish with the sweet sausage at the bottom and the butter crust. 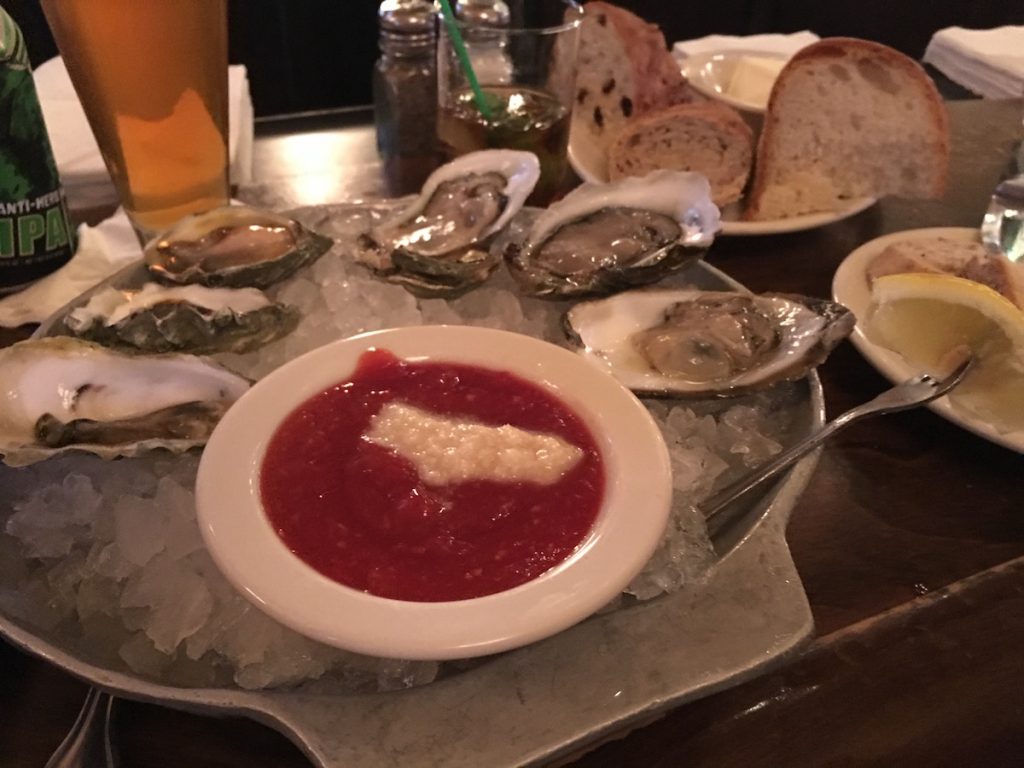 The final act for our weekend was one that I have been looking forward to since the last time I was there six years ago. To this day, the best meal I have ever had was at Gibson’s Steakhouse, and they did not disappoint this weekend. As seemed to be a trend on this trip, I kicked off dinner with a batch of oysters. 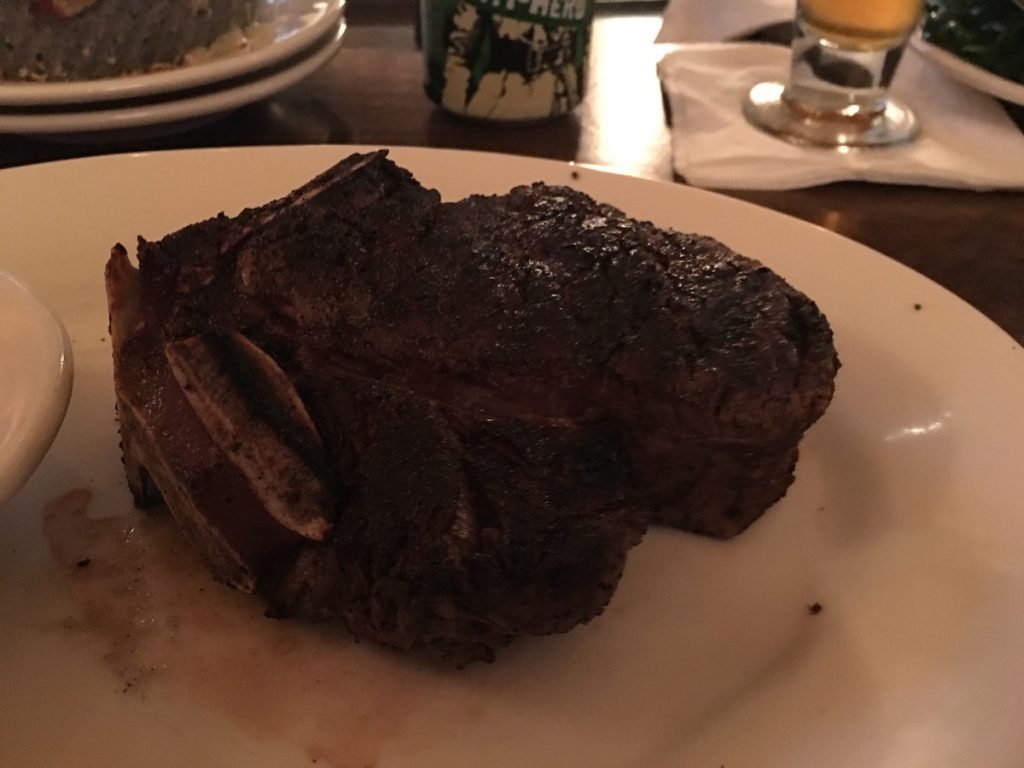 For my entree, it had to be this bon-in filet. It just had to be. 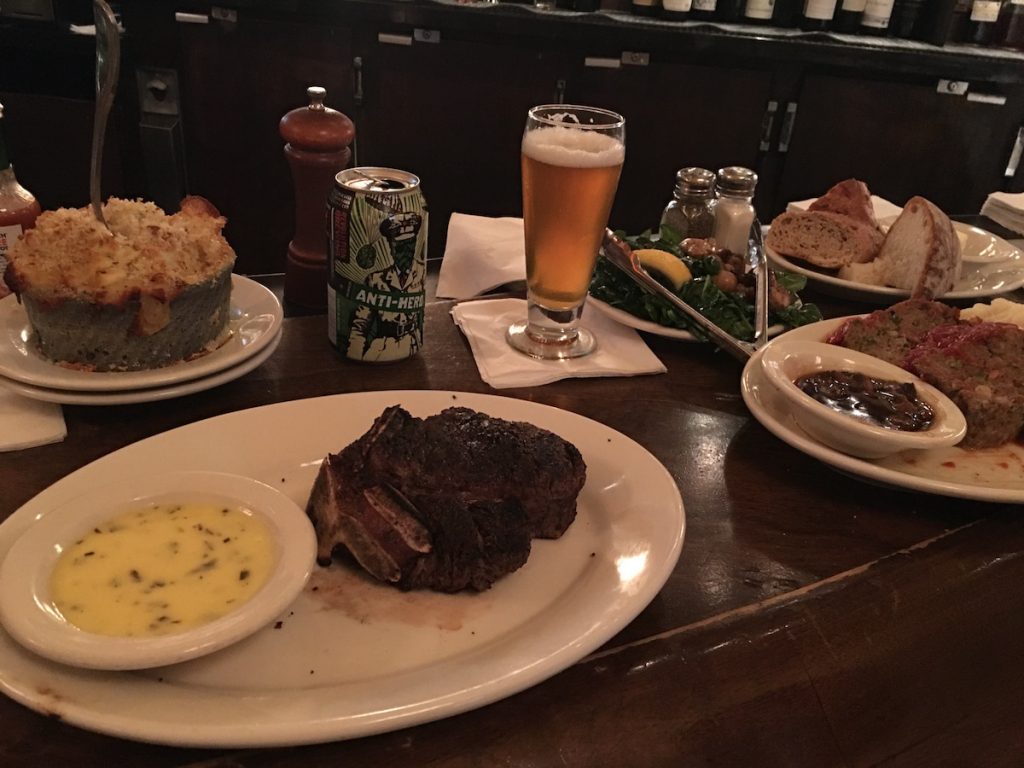 Moving back a bit, you can see the blue cheese scalloped potatoes on the left, the sautéed spinach and mushrooms, and then Mrs. YBC’s meatloaf dinner on the right. I also forgot to take a picture of the Caprese salad that she ordered, but that was the best mozzarella that either of us have ever had. Oh and that Anti-Hero IPA from Revolution Brewing is my new favorite beer…it’s delicious.

So after all that eating, I’m probably going to take some time away from eating out around here now that we’re home…but it was worth every dollar we spend and every pound that we gained. If you’re looking for a cheap trip to a big city that has an astounding number of options for your taste buds, Chicago is it.

Andrew Selby
Andrew is a professional freelance writer and lifelong resident of Beaver County. He created Your Beaver County to promote and showcase all of the positive aspects of our incredible local culture! You can find more of Andrew’s professional information at Brooklyn Content, or you can also follow him on his personal twitter account, @theAndrewSelby.
 Share this article:  Facebook  Twitter
We Bring Everyone to the Table September 1, 2016 By Erin Ninehouser
0
Comments
We Bring Everyone to the Table August 31, 2016 By Erin Ninehouser
0
Comments