Upscale Dining and a Relaxed Atmosphere at Biba Latin Kitchen 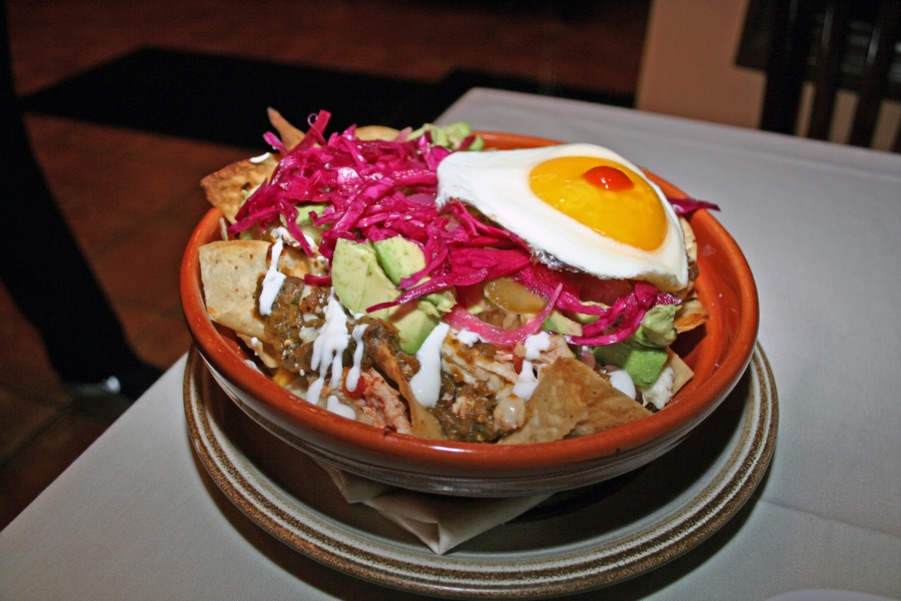 Finding a phenomenal restaurant in a large metropolitan area is fairly easy, as in a city like Pittsburgh there are three or four in every major part of town. While you may think you have to drive into the city for an upscale dining experience, all you have to do is head to the main street of Beaver and visit Biba Latin Kitchen.

Owner and head chef Jason Benegasi describes Biba as “Modern seasonal eclectic with a Latin focus.” While there is a Latin flare to nearly every meal, the true focus at Biba is on local and fresh food. Jason is a staunch believer in sourcing his food as locally as possible, which in return makes is as fresh as possible. So what’s Biba all about? I got the chance to sit down and try some food while talking to owner/founder/head chef Jason to answer just that. 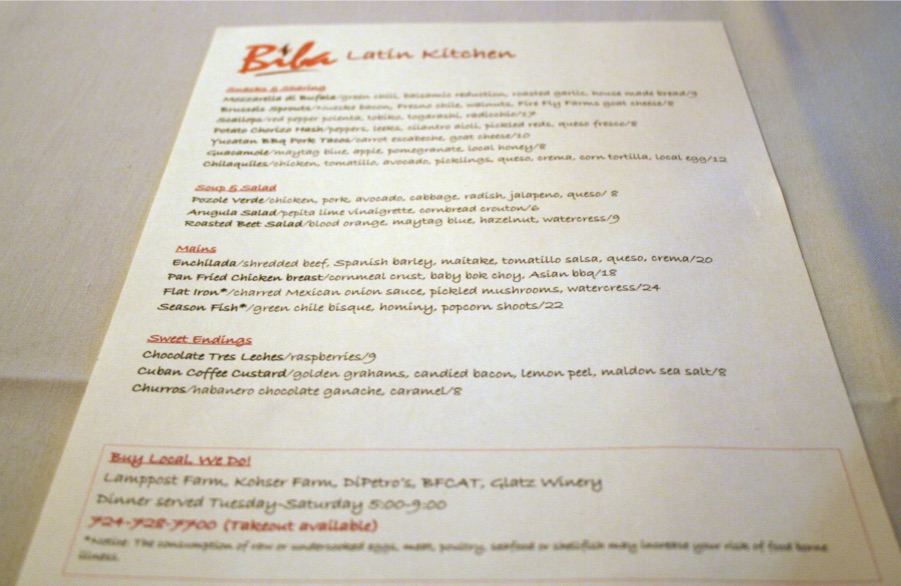 Biba opened their doors in 2010 thanks to the dream that Jason and his wife Christine had for opening their own restaurant. Jason had worked in restaurants for most of his life, starting out as a busboy and quickly advancing through the ranks to the front of the house at Pittsburgh favorite Lydia’s. While you wouldn’t guess it by trying his food, Biba is Jason’s first role as head chef, even though he’s worked with chefs throughout his career.

Along with Jason in the kitchen and Christine handling the business side of things, Biba truly runs as a team effort. General manager Jeffery Myers keeps things running smoothly in the front while chef’s assistants Cliff and John help make the food and kitchen work in the back. 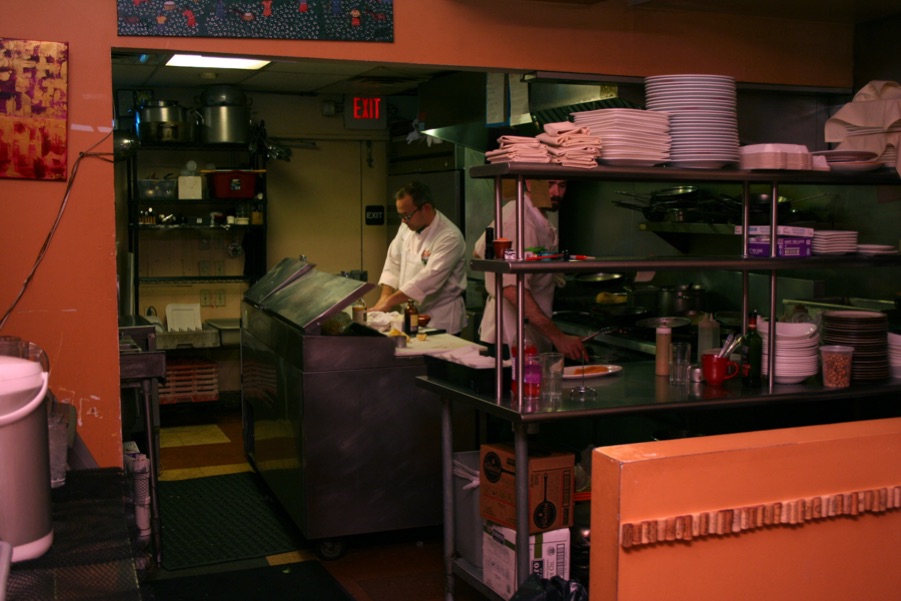 So at this point you’re probably wondering what Biba means, right? Well, I was surprised to hear the story of how someone named Biba literally saved owner Jason’s life, and that without Biba he wouldn’t be around today. He felt it was the least he could do to name his dream restaurant after him. The best part of the story, Biba was a dog. Personally speaking, I’m a huge animal person, so this really made me smile.

Biba focuses on modern Latin food with a focus on local, seasonal food that’s as fresh as possible. The menu is tweaked weekly and changed up entirely each month. Since Beaver is a dry town, Biba is BYOB, but their handling of wine is top notch, to the point that you’ll forget you brought your own.

Before getting into the food, it’s worth talking about the atmosphere of Biba for a quick minute. One would assume an upscale dining experience like Biba to be somewhat uptight and straight-laced, but this is definitely not the case. 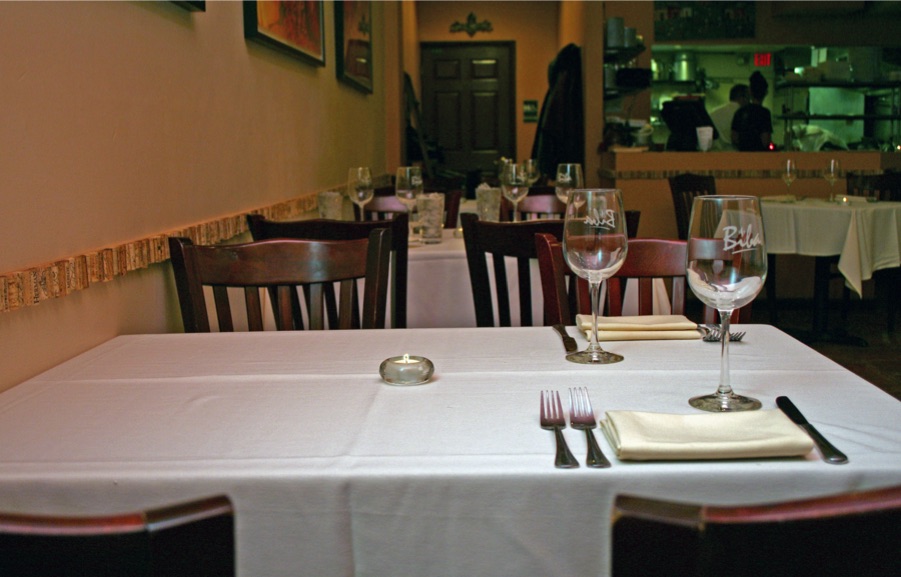 Biba’s atmosphere is casual and relaxed with comfortable lighting and a surprisingly great selection of music playing at a reasonable volume. There are a total of 12 tables, 2 of which as 2-person window seats, and even though Biba has a smaller dining room, the table spacing is perfect as to not feel crowded or imposed upon by other guests.

Dress at Biba is anything you want from jeans and a t-shirt to shirt and tie, so don’t worry about under or over dressing.

The real reason for checking out Biba is obviously their food. I’m a sucker for an amazing meal and I can honestly say that Biba lived up to my expectations of an expensive restaurant I’d expect to find in the heart of Pittsburgh.

The first item that stuck out on the menu to me was the Chilaquiles. At first glance this seems like an average nacho platter, but upon talking to Jason, I found out it’s actually a breakfast dish in Mexico that’s purported to be one of the best hangover cures going. The dish includes chicken, tomatillo, avocado, picklings, queso, crema, corn torilla, and a locally-sourced egg on top. This is one you need to try.

Everything Biba serves is made in house, including their bread, pasta, and all of their deserts. The only item not made in house are the tortillas. Jason actually used to make his own for Biba, but their tortilla dishes are so popular that they go through 500-700 tortillas each week!

Some of the local farms Biba gets their food from include Kohser Farms, Oak Springs Farms, and Lamp Post Farm. Biba also sources teas and coffees from Beaver Falls Coffee and Tea Company.

I started out with the Scallops for an appetizer, as Biba is known for this dish. They’re served arranged on a long plate with red pepper polenta, tobiko, togarashi, and radicchio. I’m not going to lie, I didn’t know what most of that was until I started writing, but basically they’re seared with a pepper crust and topped with fresh flying fish roe. These were worth every penny and I’ll easily get them every time. 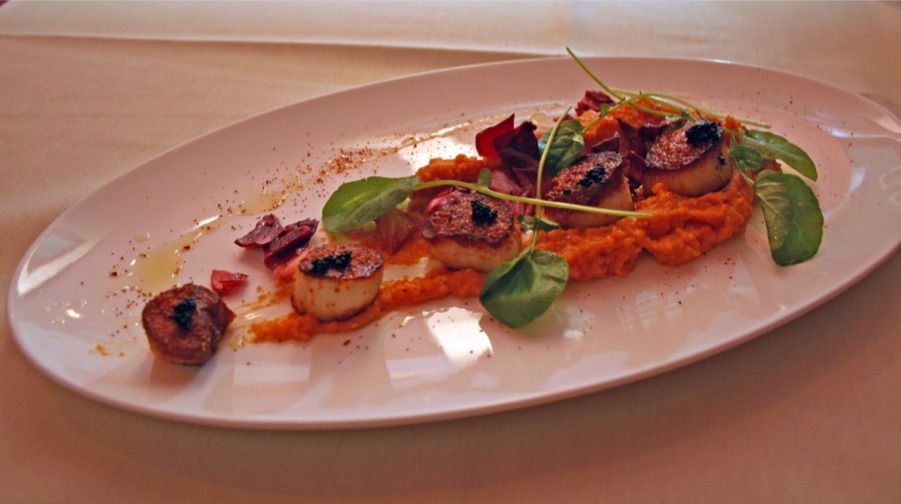 Next I moved on to an Arugula Salad that was topped with a pepita-lime vinaigrette and tossed with house-made croutons. Oh, and did I mention the croutons are CORNBREAD CROUTONS? Yep, I could eat these by the handful. The salad was tart and slightly peppery thanks to the arugula and radish slices on top. 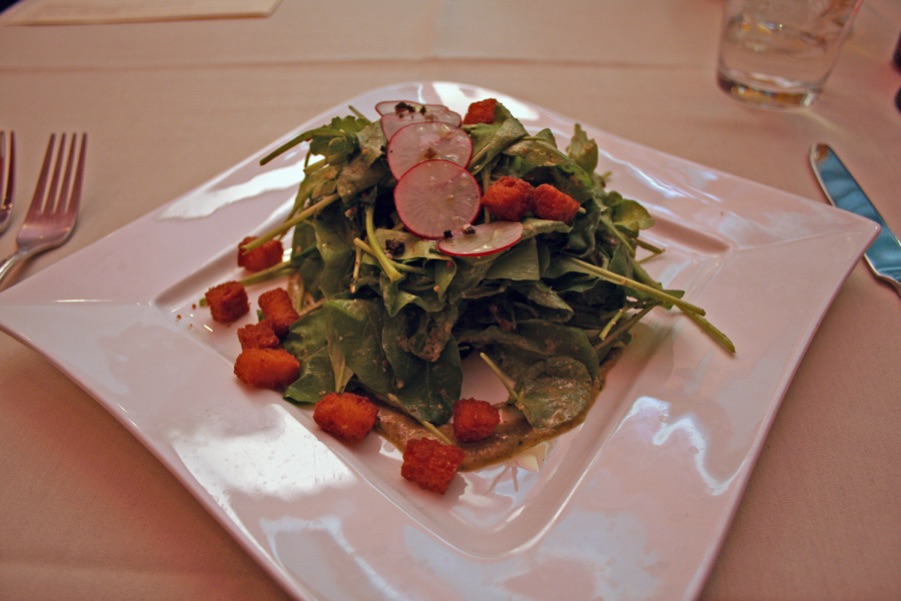 After the salad, chef Jason made me a special Spicy Mushroom Taco that wasn’t on the menu since I exclaimed how much I loved their tacos at the beginning. That’s the thing about Biba, while there is a menu, they can change it up and do a lot more than you can see. If it’s possible, they’ll do it for you. 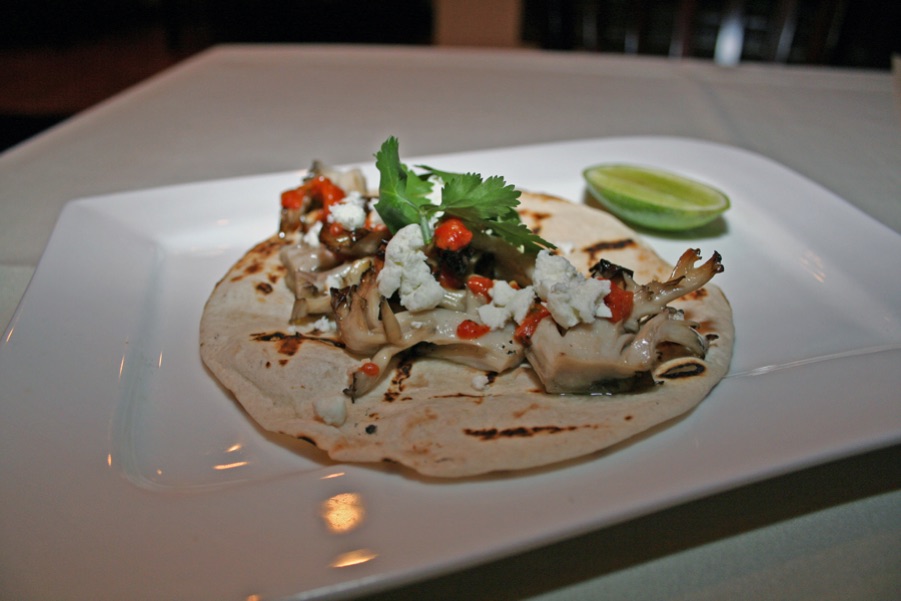 After this amazing taco I moved on to a second appetizer (why not, right?) and this time got the Brussels Sprouts. In short, these are amazing. Served with Nueske bacon, Fresno chilies, walnuts, and amazingly fresh goat cheese these are easily the best Brussels sprouts I’ve ever had. The peppers are smoked and give the dish a deep smokiness and heat that’s hard to find in most restaurants. (disclaimer, I had them sans-bacon and they were still the best I’ve ever had by far) 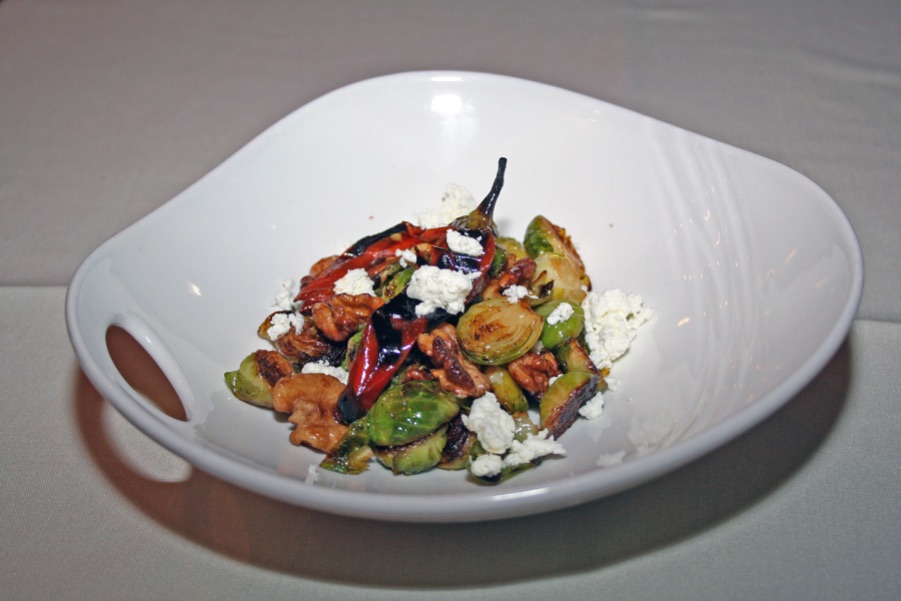 After my second appetizer it was time for the main course. I chose the seasonal fish, which this night was Swordfish. I’m not going to lie, I’m usually leery of ordering swordfish because it’s so easy to overcook and make tough. I trusted chef Jason and thankfully I was totally right to do so. The fish was presented in a bowl with hominy, and a green chili sauce made with coconut milk and lemongrass. The fish was tender and amazing, also possibly the best slice of swordfish I’ve ever had. 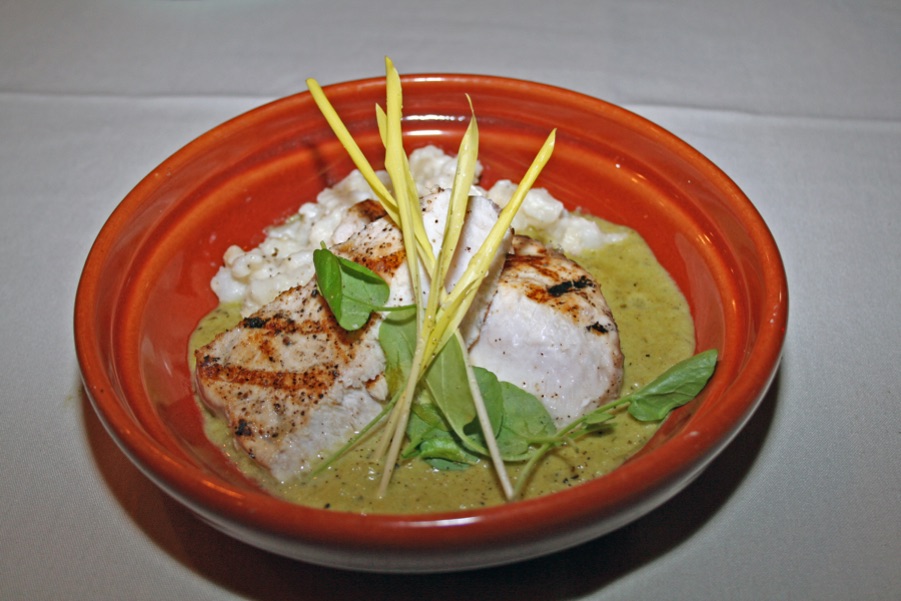 I wrapped things up with the chef’s favorite desert, the Chocolate Tres Leches. This classic Mexican dessert uses a surprisingly thick and dense chocolate cake soaked in coffee liquor on the bottom, chocolate sauce filling in the middle, and another slice of chocolate cake on top, sans liquor. This is served on handmade whipped cream and garnished with raspberries and a dollop of chocolate sauce at the end. This one was a perfect way to end the night and I’m not ashamed to say I had to bring most of it home to my wife, as I couldn’t eat another bite. Also, if she read this and knew I had it without bringing her some, I might be looking for a new home! 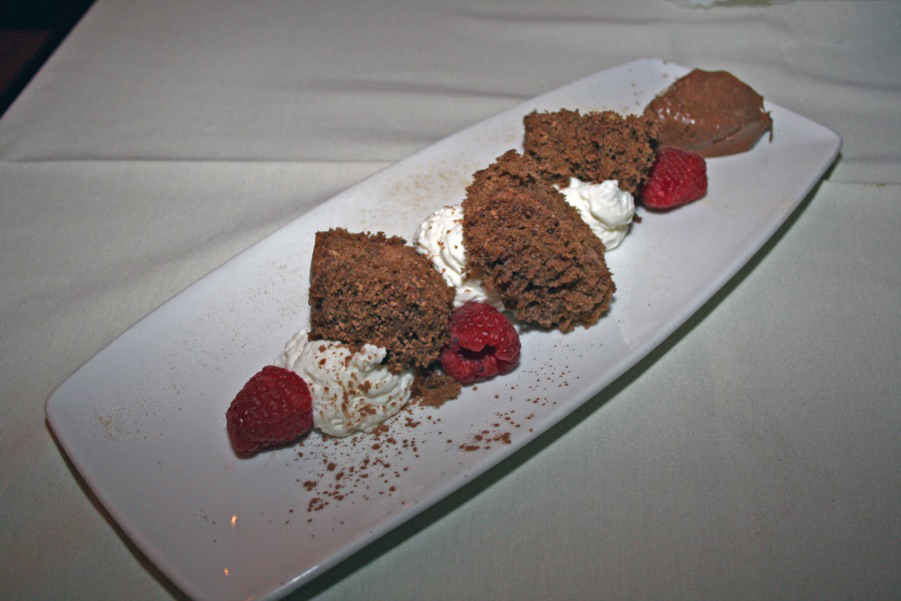 Since food doesn’t serve itself, the service is just as important to mention here as the food. The service at Biba is top notch and is comparable to restaurants nearly twice the cost. This isn’t to say that Biba is cheap by any means, but their focus on excellent service was noted. Not only did I receive amazing service, but every other table in the dining room was attended to far more than I’ve ever seen before.

For example, my silverware and plate was changed out twice just to make sure I had fresh implements to eat with. My water was never more than half empty, and each dish was explained to me in surprisingly thorough detail. The long and short of it is that service at Biba is the best I’ve experienced in not only Beaver County, but Pittsburgh as a whole as well.

While Biba sadly doesn’t offer lunch any more (something I’m still trying to get over), they do have a few specials each week. On Tuesdays they feature Taco Tuesdays with 2 for $6 tacos that change up each week. Wednesdays feature a 3-course chef’s choice dinner that also changes up each week to whatever greatness Jason can think up.

Biba also features catering with build your own tacos as well as a host of pre-made dishes as well. If you have a party but want to come in, Biba has you covered here, too. Biba is great for parties large and small, including the renting of the entire restaurant if you need something extra private.

From time to time Biba also features timely specials throughout the year, most notably their amazing New Years Eve dinner, which for 2014 was a six-course meal that featured just about one of everything on the menu.

In short, Biba is my new favorite restaurant in Beaver County. Before this article I’d only been there for lunch, which I loved. The full dinner service at Biba is something you definitely must experience.

While Biba offers an amazing value for what they charge, it’s definitely not a cheap restaurant. A couple should expect to pay around $80-$100 for a full course meal including individual appetizers and desserts, but this same meal would be 50-75% more expensive in a major city, making Biba the best upscale dining option I’ve experienced in Western Pennsylvania and possibly further.

This quality is definitely not a secret, as while I was dining the entire restaurant filled up and by 6:45 PM on a Thursday night there wasn’t a seat available in the house. Because of this, reservations are highly recommended, as it’s easy to have a long enough wait that you get turned away, even on a weeknight.

Biba is an amazing restaurant for any city, and the fact that we have it right here in Beaver County is outstanding. If you’re looking for a nice night out with that special someone, or want to take someone from out of town out somewhere impressive, Biba Latin Kitchen on 3rd Street in Beaver is your best bet, by a long shot.

Brian Meyer
Brian is a nut when it comes to all things local, especially beer. Born and raised in Center, he now resides in Beaver, loving every minute of it. A technology nut and freelance writer extraordinaire, he knows all the secret spots and things to do in the Beav.
 Share this article:  Facebook  Twitter
“Do Not Disturb” presented by R-ACT January 27, 2015 By Emily Dockter
0
Comments
Shirley M. Lyden January 26, 2015 By In Memory
0
Comments