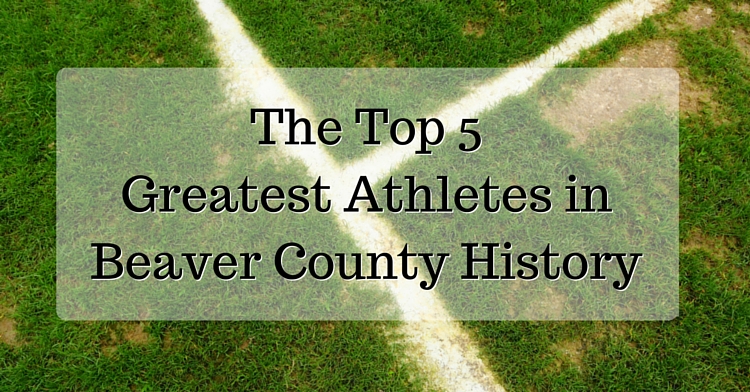 Previously in this space, I’ve written about some of Beaver County’s most notorious basketball teams, coaches, and quarterbacks. One of the things sports fans in the County can hang their hat on is the number of tremendous athletes that have come out of these parts. It’s a list that is literally prolific. We all know the names. Most diehards can virtually recite the best from each town or school.

For the sake of argument, I created my own list of the “Top 5 Greatest Athletes in Beaver County History.” Not basketball, football, tennis or baseball players…athletes. Pure athletes. Let me know what you think of this list and who I may have left off in the comments below.

Revis is arguably, and in my opinion, the best athlete in the history of Aliquippa and Beaver County. If you can prove me otherwise, please do it. He has been one of the best cornerbacks in the NFL since his career began after dominating the Big East at Pitt.

Revis could have easily played basketball at Pitt, too. Quip fans will remember him for scoring five touchdowns five different ways in the state championship, then dropping 35 points against Beaver Falls a couple days later. The best athletes in the NFL play cornerback, and he is the best of the best. Years from now, Revis will most definitely be enshrined into the Pro Football Hall of Fame.

Most folks reading this will either have never heard of Alston, or will have a hard time remembering him. Alston graduated from Midland in 1941, and he was inducted into the Beaver County Sports Hall of Fame’s inaugural class of 1976. I once asked fellow (and now deceased) hall of famer, Al Vlasic, who the best athlete he ever saw was. Without hesitation, Vlasic said, “Dave Alston.”

Alston was true phenom. In Midland’s heyday, he earned 12 varsity letters: four in football, four in basketball, and four in baseball. He then went on to Penn State on a football scholarship where he would only play one year at halfback. In 1942, Alston died tragically due to complications of a tonsillectomy. Alston was so talented, he often drew comparisons to the legendary Jim Thorpe.

You can’t talk about the greats of Beaver Falls without mentioning the name of Dwight Collins. Depending on who you talk to, Collins was either the best or second best athlete to ever graduate from BF. My mother’s family is from Beaver Falls, and I grew up listening to tales of the legendary players and athletes that played for coaches Larry Bruno and Frank Chan.

Collins’ name always came up as an athletic freak of nature. He, too, earned 12 varsity letters in high school: four in basketball, four in football, and four in track. In his senior year of high school, Dwight was named an all-American in football, was selected to play in the prestigious basketball all-star game, the Dapper Dan Classic, and won the state title in the 200 meters. He went on to star at wide receiver at Pitt, before a brief stint in the NFL.

Joe Namath is the most legendary athlete that has ever come out of Beaver County…bar none. He starred under Coach Larry Bruno at Beaver Falls, where he played quarterback in 1960 and led the Tigers to an undefeated 9-0 season and the WPIAL class AA championship. “Joe Willie” dominated in basketball, too. It’s been said he would dunk the ball with ease in an era where dunks weren’t common at all.

Namath was a tremendous baseball player at BFHS, and upon graduation, had several offers from teams such as the Pirates, Phillies, Reds, Mets, and Yankees. He had a cannon for an arm, and it helped land him a scholarship for Coach Bear Bryant and the Alabama Crimson Tide. Most sports fans know the rest. Namath would go down in history when he led his New York Jets to one of the biggest upsets in pro sports at the time, a David vs. Goliath win over the Baltimore Colts in Super Bowl III in 1969.

This list would not be complete without Lauryn Williams. Williams is arguably the most successful athlete to ever come out of Beaver County. After graduating from Rochester, she went on to a hugely successful track and field career at the University of Miami. She then starred on the global stage of both the summer and winter Olympics, something that is rarely ever done.

At the 2004 Athens games, she won the silver medal in the 100 meters. In London 2012, she won a gold medal for her role on the 4 x 100 meter relay team. Then, in 2014 at the Sochi games, she and teammate Elana Meyers brought home the silver medal in the two-woman bobsled competition, only losing to Canada by 0.1 seconds. Williams has also won gold medals in the Pan-Am games and World Championships. For close to a decade, Williams was one of the fastest women in the world.

Marc Grandinetti
Marc is a lifelong resident of Beaver County. A 2001 graduate of Center High School and 2005 graduate of Point Park University, Marc is employed by the Pennsylvania Cyber Charter School and officiates high school and college football. Follow Marc on Twitter, Snapchat, and Instagram @marcgrando
 Share this article:  Facebook  Twitter
Places to be Eating and Drinking This Spring April 27, 2016 By Marc Grandinetti
0
Comments
This is My Station April 25, 2016 By Erin Ninehouser
0
Comments