The Amazing Journey of the Freedom Boat Yard Bell 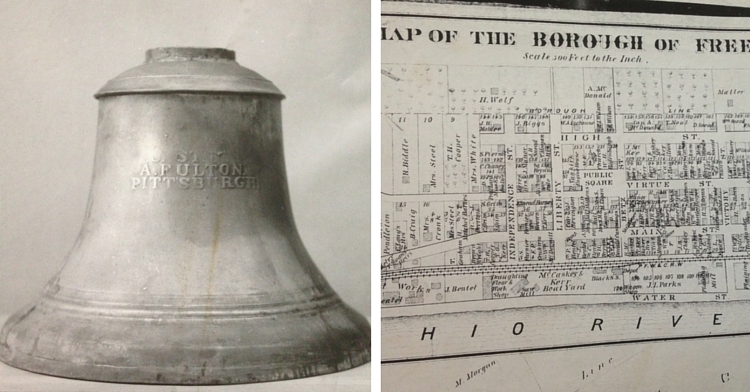 A retired teacher from the Freedom School District told me about this bell and it was a really neat story so I thought I would share!

In 1832, two guys named Jonathan Betz and Stephen Phillips founded Freedom. These guys also owned a steam boat business and thought that Freedom would be the perfect spot for it. The entire town was built around this steam boat yard and all road pretty much lead directly to it. By 1837, Freedom had grown into a population of about 600 people, and mainly relied on this ship yard and also a distillery as the main businesses.

As years went by, this steam boat yard had a list of almost 70 ships built. This boat yard was on the Ohio River, between what was then known as Independence Street and Betz Street. It was really the entire span of town.. Probably from the ramp off of 65 coming from Rochester to a bit past Gilarno’s Auto Repair. The whole town, at that time, either built boats or distilled booze.

This ship yard had a few buildings on its site, a shed and a saw mill, among them. Inside the shed was a bell that the entire town used.  It rang at the beginning and ending of the work day for the boat yard and it was also used as the fire bell, the church bell and the school bell. Everyone in town knew the sound this bell made, not only because it was always ringing but because apparently it made a pretty unique sound.

This not-so-little bell kept ringing for years and years, until 1884. That is when the volcano on the island of Krakatoa, Indonesia exploded. This caused tsunamis and destruction worldwide, including massive flooding of the Northern Hemisphere…. And of the town of Freedom.

The ship yard including the saw mill and shed and the rest of the buildings were washed away with the flooding of the Ohio River. Some history claims that residents saw it floating away, ringing loudly as it sailed down the river. Everyone that watched it head down the river just assumed it was gone forever.

It kept floating down the river until a farmer in West Virginia saw it and somehow captured it. He brought it onto his field and he was using it as a farm bell. Years later, fate brought a couple of the old Freedom boat yard workers into West Virginia and into this farmer’s field where they heard the distinct tone of the bell ring again.

These guys had heard that bell ring for years at the start and end of their work shifts so they knew it was the same bell. They asked the farmer where he got this bell and sure enough, the farmer explained how it washed up in the flood! The farmer let the boat yard workers return the bell to Freedom.

So the bell came back to its home in Freedom. Although, since the ship yard shed was no longer there, it went on top of the building that was being used as the town jail and the fire house. This building was eventually torn down in 1913 to make room for a new fire house and a new bell was purchased.

The old boat yard bell was then moved to the then-new Central School Building and was raised to the belfry during a dedication ceremony. There it rang as a school bell until the building was sold in 1969.

As the janitor was clearing out the school, the story behind this bell and its journey came to light. Because of the history of the bell, it was then moved to the Freedom Senior High School and eventually to the Middle School where it rang for special occasions and would be permanently left on display.

What a great story, right?!? Does anyone know anything more about this? I would love to hear from anyone that has memories of any of this!!

Anastastia Beaverhausen
Anastasia Beaverhausen is a married, stay-at-home mom of three kids. She was born, raised and still lives in downtown Beaver. Her main goals in life are making sure everyone lives through the week, the house doesn’t end up condemned, and teaching two (so far) small people how to “people” properly. In her free time, Ana enjoys running, knitting and gardening, although free time is a pretty tough thing to come by these days. Follow her on twiter @bcBeaverhausen!
 Share this article:  Facebook  Twitter
My First Bobbin Was Rather Large January 11, 2016 By Amanda Bradley
0
Comments
Everybody Helps Out January 10, 2016 By Erin Ninehouser
0
Comments