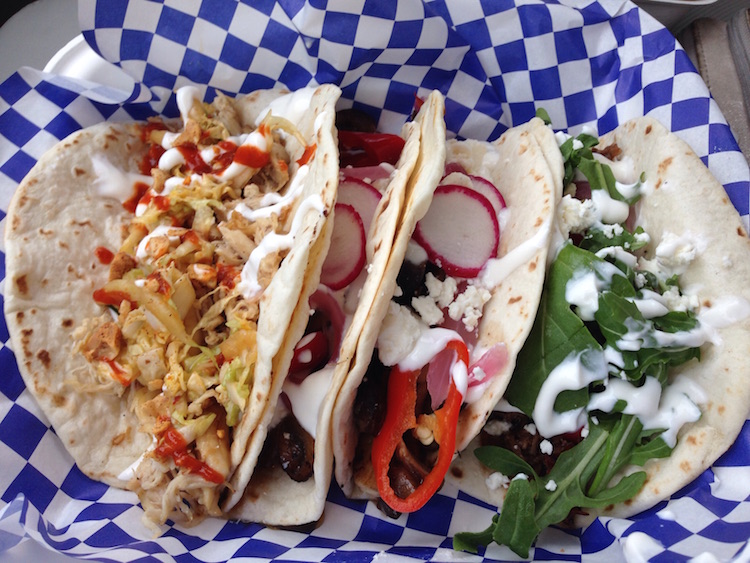 While food trucks are not new, there is a new breed that has emerged over the last few years. Delicious, gourmet food out of a truck – Nothing like that South Side street meat you would eat at 2 am in your younger days.

This new food truck is fresh and enticing, and you just might start following it around town. Maybe.. If you are anything like us, that is.

I found the Taco Stop based on Twitter suggestions, as I just signed up for an account and it was listed on one of the ‘People you may want to follow’ emails that is sent (also, I could use some followers – wink-wink nudge-nudge).

Knowing nothing but what was listed on their Twitter page and having nothing in the house for dinner, it seemed like fate and we went for it.

They were set up at Bruster’s in Bridgewater that day, and the menu was listed online.. and it sounded amazing!

The Mister and I couldn’t decide on just one, so I picked up a few of each.

For Toddler Beaverhausen, they were able to put some chicken and queso on a taco shell. Perfect for little guys that aren’t quite ready for sriracha yet!

The tacos were simply fantastic!! As a lover of all things sriracha, the chicken was right up my alley. The crema lightened up the heat just a touch and the peanuts added a lovely bit of crunch and flavor.

A close second for me was the mushroom – I love a meatless meal option! It was loaded up with veggies and topped with a crisp bite of radish.

The Mister said he couldn’t pick a favorite, although he really yummed up the beef. The toddler gobbled his down too.

When I shared with my fellow YBC folks the amazing experience we had, Andy suggested an article on the truck. Thinking of eating more tacos as research, I eagerly obliged.

When I reached out to the folks that owned Taco Stop through Facebook without doing much of my own research first, I was surprised at their response.

It was Jason and Christine Benegasi – The owners of Biba! No wonder the food was so delicious!! Taco Tuesday’s on the go.. that’s basically what Taco Stop is.

If you aren’t familiar with Biba, put this restaurant high on your list of places to try. It is incredible! Brian wrote a great article about it here.

The truck is basically an extension of their restaurant. They get as much locally sourced food as possible, either through Fellowship Foods for produce or Lamppost Farms for meat.

While the staples are the tacos and a Cuban sandwich (which I am saddened to report, we have yet to try..), they did tell me that they will have some special menu offerings as well – Sweet potato fries, chips and guacamole, a special taco.. It will vary.

But, as an extension of their restaurant, you can confidently go with the expectation of the same quality of food as if you were sitting down in Biba.

Another quick bonus on the truck? If I have said it once, I have said it enough times to be a completely broken record. Taking an almost 3 year old to a restaurant is pretty much terrible. But, finding good food on the go can be pretty difficult.

This makes life easy for everyone! Biba tacos at home, so that the tantrums can happen in a familiar environment. Nice, right?

Tracking Down the Truck 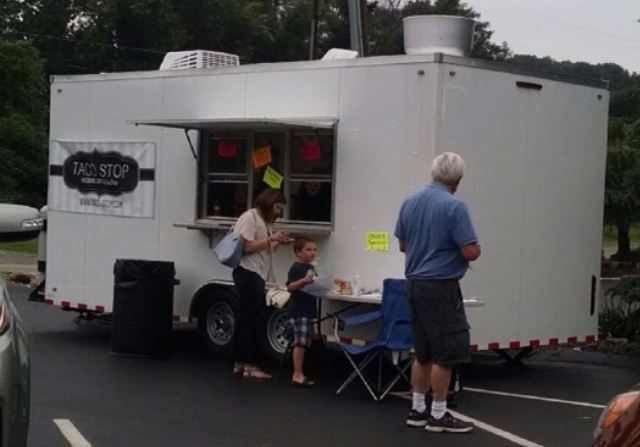 The truck does have a website that lists the upcoming events. They will be all over the area in the next few months – from Moraine State Park to Bloomfield.

Jason did mention that they are in the works for setting up some lunch areas nearby, so stay tuned for more detail on that!

They are also available for catering your private event. If you do cater something with this truck, please don’t forget to invite the Beaverhausen’s! We love tacos and would love to celebrate with you!

Anastastia Beaverhausen
Anastasia Beaverhausen is a married, stay-at-home mom of three kids. She was born, raised and still lives in downtown Beaver. Her main goals in life are making sure everyone lives through the week, the house doesn’t end up condemned, and teaching two (so far) small people how to “people” properly. In her free time, Ana enjoys running, knitting and gardening, although free time is a pretty tough thing to come by these days. Follow her on twiter @bcBeaverhausen!
 Share this article:  Facebook  Twitter
Roxy is a deaf puppy... July 6, 2015 By Elena D'Agostino
0
Comments
Meet Jack! July 6, 2015 By YBC
0
Comments