Legend has it that at one time, our adopted hometown of Ambridge once held a spot in the Guinness Book of World Records for having the most bars AND the most churches per capita. Priorities, right?

But also a sign of a community that values connection: with friends or fellow workers, sharing drinks and stories, and with family and fellow parishioners, sharing prayers and song in the pews on Sunday. Work hard, play hard, pray hard.

Even though so much has changed since the days when 20,000 people filled the streets and the mills, our churches remain, hallowed and hauntingly beautiful. Community leaders in Ambridge are making sure these treasures aren’t hidden, but celebrated and appreciated for the rich history they contain.

The Ambridge Regional Chamber of Commerce (ARCC), headed by president Kim Villella is teaming up with the Borough and our State Representative, Rob Matzie, to feature 4 of these historic churches tomorrow night on a bus tour that will make stops at:

St. John’s Lutheran Church, completed in 1831 by members of the Harmonist Society (who also made the bricks!) on the grounds of Old Economy Village. 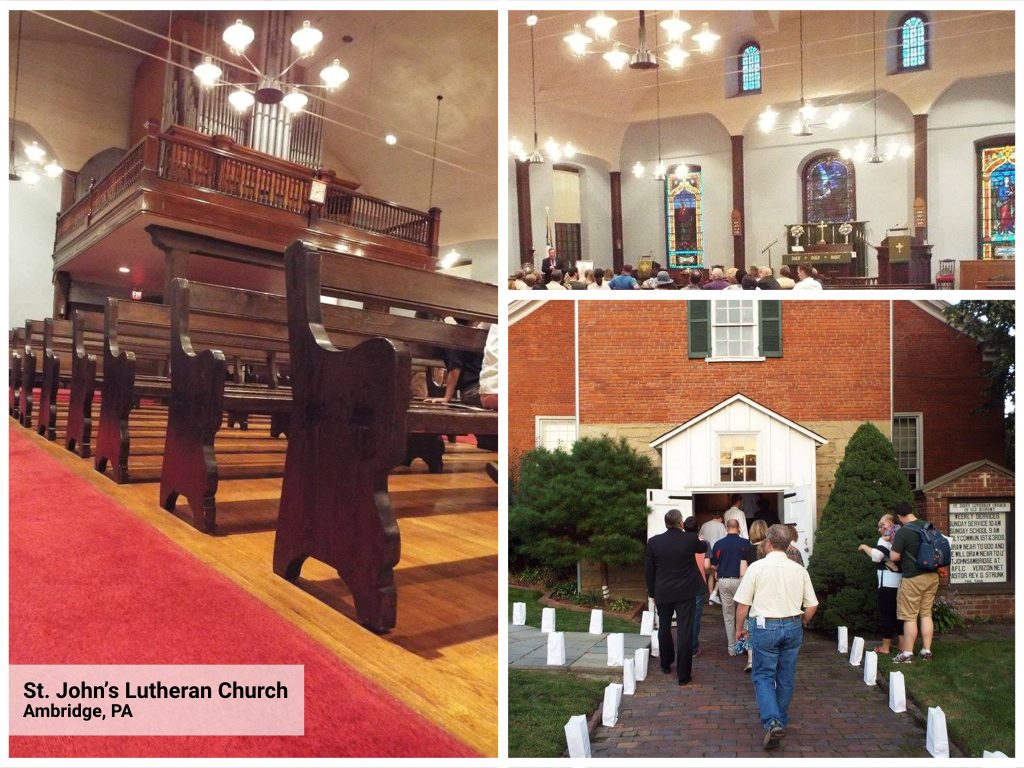 St. Mary’s Coptic Orthodox Church, completed in 1955 (built on the foundation of the original parish, Christ the King Catholic Church) at the corner of Melrose and 10th. 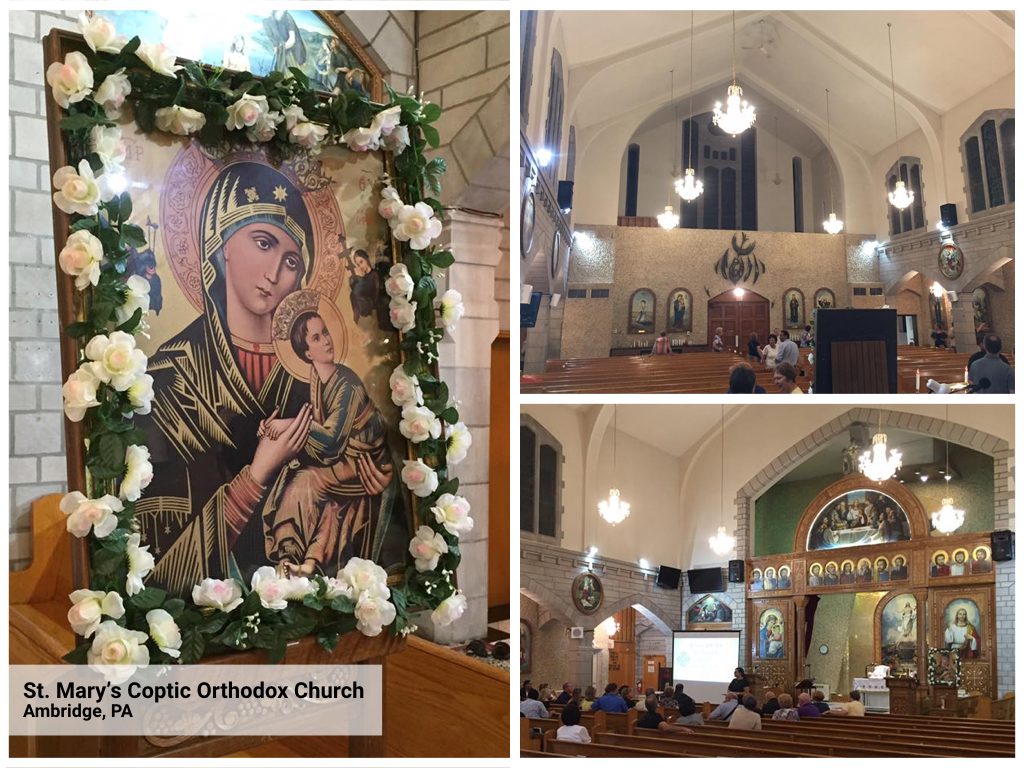 St. Vladimir Ukrainian Orthodox Church, which broke ground in 1928 (following a post-WWI rebirth of Orthodox Catholicism in Ukraine and in the United States) at the corner of Melrose and 9th. 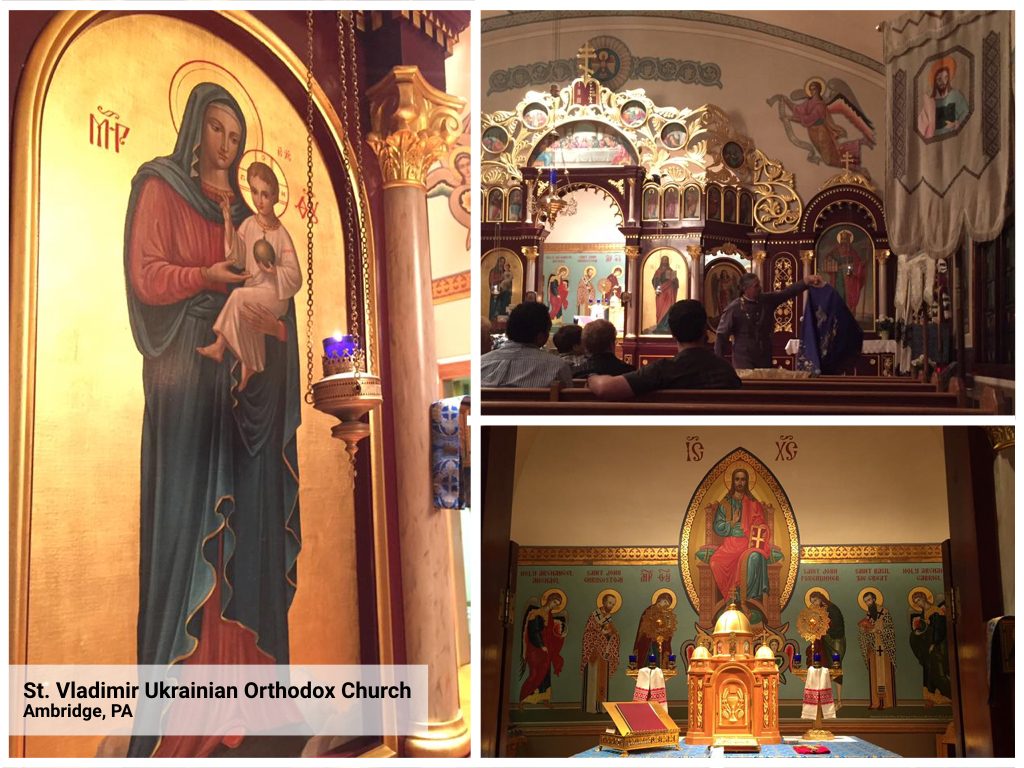 Saints Peter and Paul Ukrainian Orthodox Church, completed in 1951 (built on the foundation of the original parish, established in 1907) at the corner of Melrose and 6th. 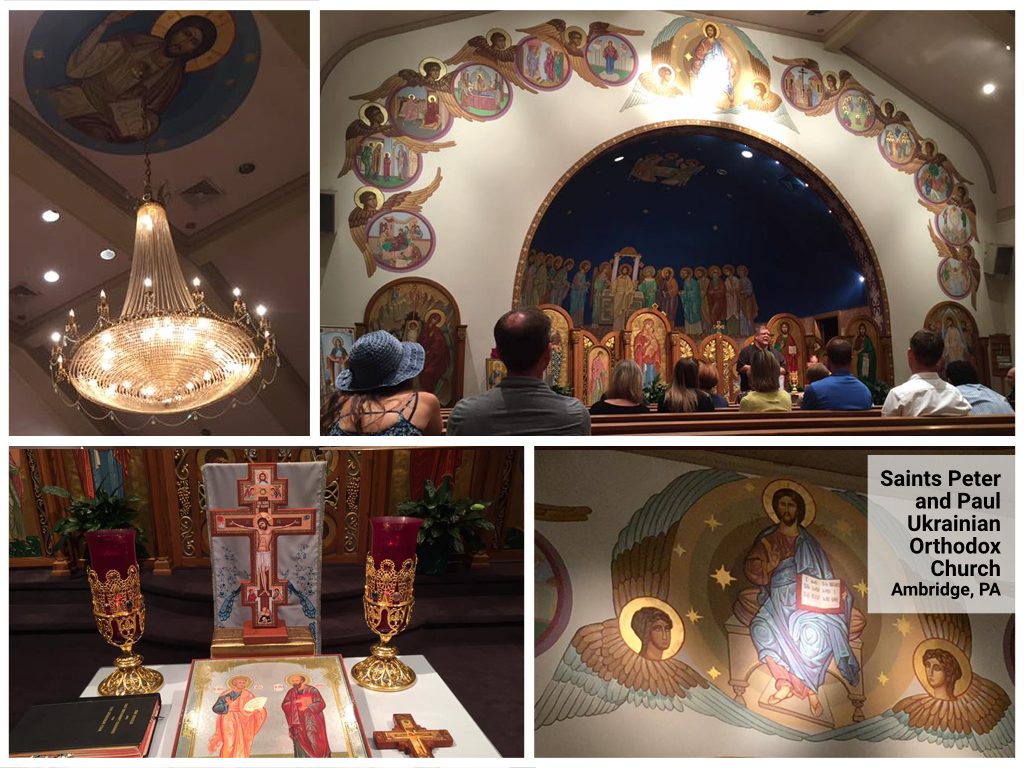 The bus tour originated as part of “The Festival of Churches,” a celebration of history and community that Villella intends to make an annual event. The inaugural festival took place this past September, and was an overwhelming success.

Save the date for the 2017 Festival of Churches, which will take place at PJ Caul Park in Ambridge on Saturday, Sept. 30th, with a bus tour featuring 4 different churches on Friday, Sept. 29th. 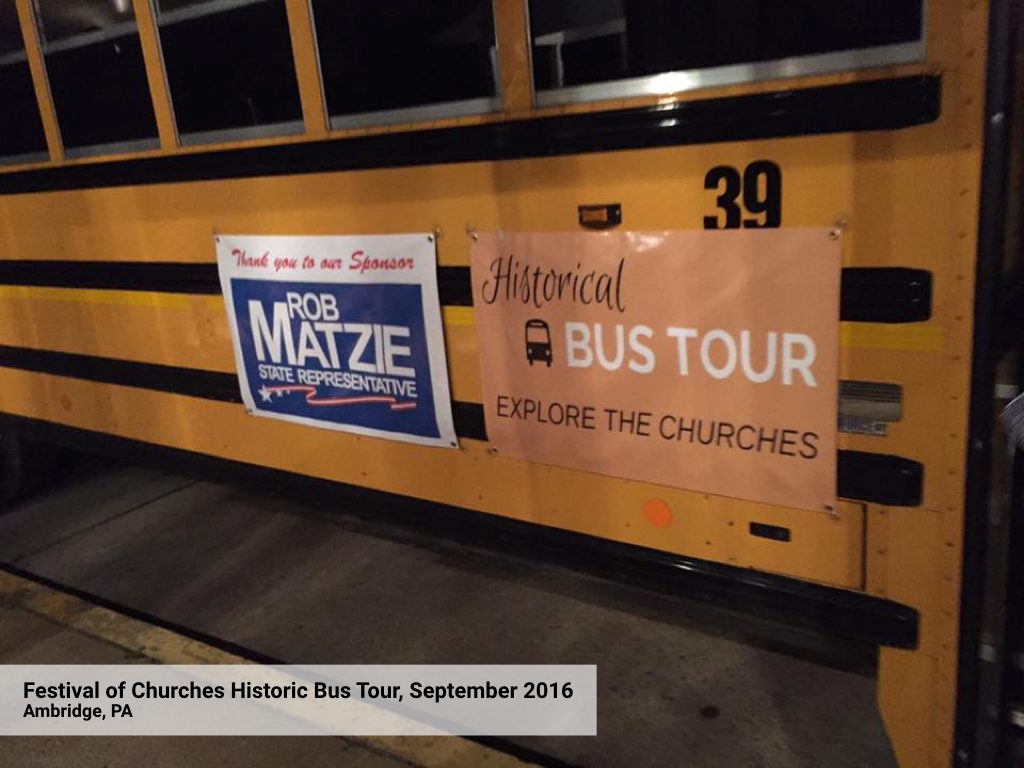 Tickets for tomorrow’s tour were $10/person but quickly sold out! Rep. Matzie is generously co-sponsoring the event, as he did for the first tour in the fall. All photos here are courtesy of Rep. Matzie.

Intrigued by this idea and thinking it might work in your town? ARCC Executive Director Taylor Nichol encourages you to go for it! Easily replicable in any of Beaver County’s communities, Nichol says a bus tour is a great way to bring people together and showcase the beauty and history of our churches.

If you were going to plan a tour of the churches in your town, which ones would be on the list? Let me know in the comments!

Erin Ninehouser
Erin Ninehouser loves photography for its ability to reveal truths and insights that are often too difficult to capture with words. She believes, as Garrison Keillor says through his troubled yet triumphant character Barbara in Pontoon, that “the only sermon that counts is the one formed by our actions.” A native of New Castle, Erin has made her home in Ambridge where she lives happily with her wonderful husband Dave, their three adorable and hilarious cats, and their “old gentleman” dog, Max. Erin is excited to help tell the stories of the people of Beaver County. You can see more of her work on Facebook and connect on Instagram or Twitter.
 Share this article:  Facebook  Twitter
People of Beaver County April 22, 2017 By Ella Parker
0
Comments
Spring Ahead with Hallowed Grounds! April 19, 2017 By Ana Beaverhausen
0
Comments