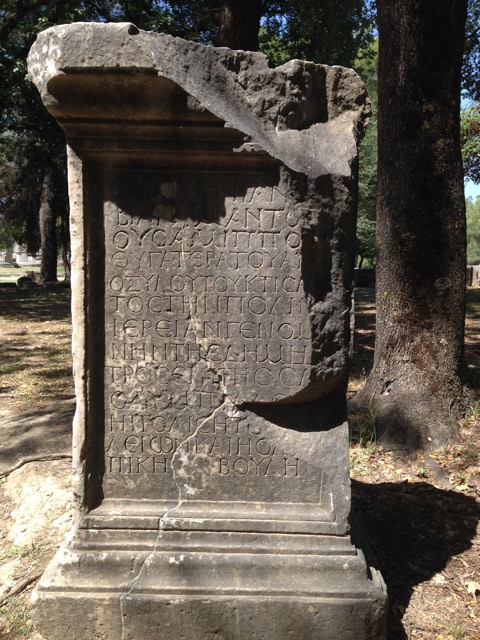 Do you not know that in a race all the runners run, but only one receives the prize? So run that you may obtain it. Every athlete exercises self-control in all things. They do it to receive a perishable wreath, but we an imperishable. – I Corinthians 9:24-25

Last week, I had the opportunity to visit the Greek village of Olympia, where the ancient Olympic games were held. Despite the brutal heat and humidity, I was absolutely fascinated by the ancient remains.

The original amphitheater/stadium was designed to hold approximately 50,000 spectators, and all of them would stand for the event – except for the ‘box seats’ for a handful of judges. This location was used at least as far back as the 5th century B.C. , and the starting blocks for the sprinters are still fastened in the ground!

The original games were dedicated to the Greek god Zeus (in the men’s competition) and Athena (in the women’s competition, which was held separately two years after the men’s Olympics in four year intervals). Winners’ names would be engraved in stone around the ‘winner’s circle’, and champions would be considered celebrities in the ancient world, often receiving gifts such as free food for life from the grateful rulers of the cities that they competed for.

And if you think athletic competition was purer in the ‘old days’, you’d be wrong. There is boulevard outside the stadium with 16 pedestals filled with the names of those who cheated during the contests, along with their offense, and the fine they had to pay, which would go toward creating statues of Zeus. Offenses included drinking animal blood before a race, which would be the ‘steroids’ of today. How would the cheaters be caught? Official urine drinkers would be able to taste the difference. (How would you like that as a job?) Winners would get an olive branch laurel wreath – and a name etched in stone.

The apostle Paul picks up this image in discussing our lives of faith. (See also Hebrews 12:1-3) Corinth was a wealthy and cosmopolitan city – a bit like modern New York mixed with Vegas and L.A. It was extremely easy for young Christians to start running after money, power, sex, or popularity. . .but Paul declares that the most important reward is to run after the Servant Jesus who gave up all the privileges of heaven to rescue slaves (the human race) from eternal bondage. (Mark 10:35, 1 Cor. 9:19-23)

Long distance races in the modern-day Olympics can provide plenty of inspiration in meditating on these verses. Perhaps we are called to dig a bit deeper in our daily race – look for the story about Billy Mills in the 1964 Tokyo games. Perhaps we’re called to consider how God can deliver us when we encounter crushing disappointment, like Jim Ryun in Munich in 1972.

The point is, our eternal judge is the One who lays out the rules of the most important race we’re running, and He is able to encourage and renew us when we are tempted to quit.

Keep running friends! I can’t wait to see who’s meeting us at the finish line.

Rev. Scott Graham
Scott Graham is Pastor at Cup Evangelical Presbyterian Church in Chippewa. His wife Kristina is the Orchestra director for the Beaver Area school district. They have three grown children.

Cup Evangelical Presbyterian is located in front of Blackhawk High School in Chippewa. We offer a blend of traditional and contemporary worship in the Reformed tradition. Our ‘Shine’ program is a mid-week music and drama experience for children. We have opportunities for youth, as well as local and international missions. ‘Join us for a drink of living water!’ Take a look at cupepc.org.