Proud of the Work that We Do

Brought to you by Rochester Manor+Villa April 12, 2017 By Erin Ninehouser
0
Comments 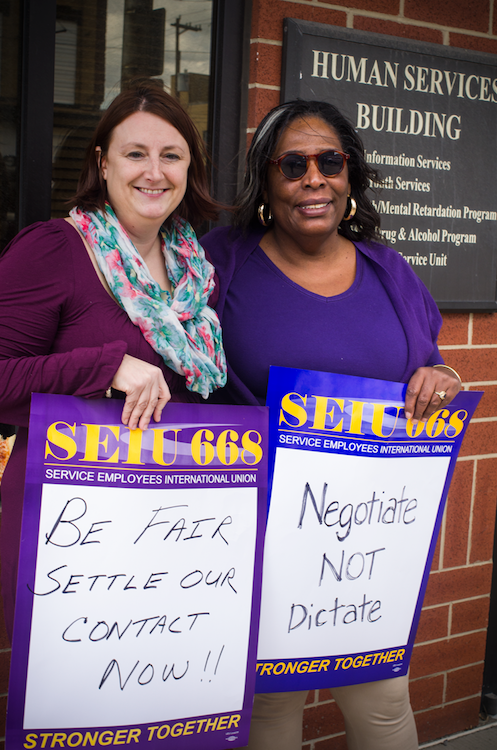 “The majority of funding for our work comes from the federal and state government, not the county, so we’re not a burden on them. Two weeks ago, we got a regressive offer via email, one with a decrease in wages and an increase in our health care costs — it was worse than the one they offered in February.

“My concern is this: we perform an invaluable service to the community. And in a society which says that they value children, the value they place on the work we do does not indicate that. People who fix cars make more than we do, have better benefits that we do. I believe that everybody who comes to work in this building is dedicated to improving the lives of families and keeping children safe. We’re proud of the work that we do and just want to be treated fairly.”

[Leah Bayer of Beaver Falls and Debbie Anderson of Ambridge, members of SEIU Local 668 rally outside the Human Services Building in Beaver Falls on April 1st. At that time, the workers had been working without a contract for nearly a year and negotiations with the county commissioners were at a standstill. Since then, a tentative agreement has been reached and will be voted on in the coming days.]

Erin Ninehouser
Erin Ninehouser loves photography for its ability to reveal truths and insights that are often too difficult to capture with words. She believes, as Garrison Keillor says through his troubled yet triumphant character Barbara in Pontoon, that “the only sermon that counts is the one formed by our actions.” A native of New Castle, Erin has made her home in Ambridge where she lives happily with her wonderful husband Dave, their three adorable and hilarious cats, and their “old gentleman” dog, Max. Erin is excited to help tell the stories of the people of Beaver County. You can see more of her work on Facebook and connect on Instagram or Twitter.
 Share this article:  Facebook  Twitter
Easter Devotional - Pastor Jeff Arnold April 16, 2017 By Ana Beaverhausen
0
Comments
Frame of Reference: Merrick Art Gallery April 11, 2017 By Sharon Speerhas
0
Comments