Places to be Eating and Drinking This Spring 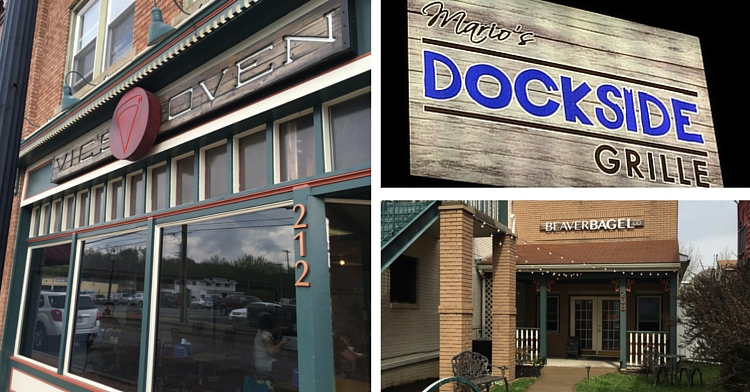 Spring has officially sprung in Beaver County. We escaped the dreaded winter months with only a few inches of snow, and mild temps for this part of the world. Now that April is upon us, Ana Beaverhausen and I decided to let our readers know where they should be eating and drinking this spring.

We made a pact we would give our readers some new places to try out that we previously haven’t covered, except for one place that had to make our list. As you will see, three out of our five are in Bridgewater. Is Bridgewater the next up and coming hot spot primed for gentrification in Beaver County? I guess time will tell. Without further adieu, here is our top five.

Sheffield Cafe has been a mainstay in the Sheffield area of Aliquippa for a very long time. But the reason why it’s on this list? New ownership! Any time there’s a change in ownership, it can be for better or for worse. For Sheffield Cafe, new owner Brett Gradik has breathed new life into the bar/restaurant.

Gone are the tacky wall decorations and Aliquippa Quips decor. “The Cafe” has a new feel and a new vibe to it. They have 14 new menu items, and daily drink specials, including happy hour from 4-6 pm where they offer $2 well drinks and $1 Miller Lite bottles, and $2 domestic bottles. Oh, and they also serve breakfast. There is officially no shortage of breakfast spots in the Aliquippa/Sheffield area now.

I wrote about the “new Mario’s” a few months back, and it was one of our most popular articles ever. Since opening back in the late fall, Mario’s Dockside Grille in Bridgewater has been serving up quality food that customers are used to eating at their flagship location in Beaver. Right around Christmas, Mario’s Dockside unveiled a full-service bar with 10 beers on tap, as well as wine and liquor. Diners have been pleased with Mario’s Dockside, as the restaurant has seen its share of rave reviews in the past couple of months.

Paradise Pub has one of the better outdoor seating areas in Beaver County. It’s adjoining, covered patio is filled with tables, sand, and plenty of seats to enjoy a cold beverage. There’s also an outdoor bar with two flatscreen TVs mounted to the wall. The indoor part of Paradise Pub isn’t bad, but it’s their outdoor patio that draws people to this establishment.

Another key to this place: the food. Paradise Pub serves excellent food, big portions, it’s reasonably priced. You won’t break the bank by eating and drinking here. If you’re coming for happy hour, make sure you get a seat on the outdoor patio as early as possible! It fills up rather quickly.

Little things in life excite me more than a great slice of pizza, and Vic is the man when it comes to knowing his pizza stuff. Prior to this new storefront, he was the pizza guy at Wooley Bully’s, which has made many of YBC ‘Top Spot’ lists. Vic opened this little slice of Bridgewater heaven at the beginning of March, and the place has been packed ever since.

The pizza is simply amazing! They sell traditional round and Sicilian pizzas, calzones, hot sandwiches, and salads. The specialty pizzas are where it’s at though, for sure. Although to compare a Vic’s plain cheese pizza to a Vic’s specialty, like the Hunky Alley or the Mexican, would be like comparing unicorns to rainbows. How could you possibly choose between them?! Unicorns, rainbows and Vic’s – Parti di trois!

They are open Tuesday-Saturday 11 am-8 pm. I’ll see you guys there!

Another newbie storefront in Bridgewater which just so happens to be right next to Vic’s Oven is the Beaver Bagel Co. I wrote about them before when they first appeared at the Beaver Farmer’s Market. This storefront has brought so many other bagel possibilities to life! Not only can you enjoy them all weekend long, but they are teaming up with other local businesses to create some delicious bagel masterpieces! They have a bagel with lox from Heirloom, different hummus bagels from Herban Touch, and pickles and other deliciousness from Fellowship Foods.

In addition to bagels, there are other goodies too – granolas, baked goods, even house made cream cheese (which pretty much explodes in your mouth..wait for it.. cause it’s the bomb). The place is a can’t miss! They are open Friday 6 am – 2 pm, Saturday and Sunday 7 am – 3 pm, and when the farmers’ market open back up in May in the Courthouse parking lot, they will be there as well! As always though, get there early because she will sell out!