It's About People Being Able to Support Their Families 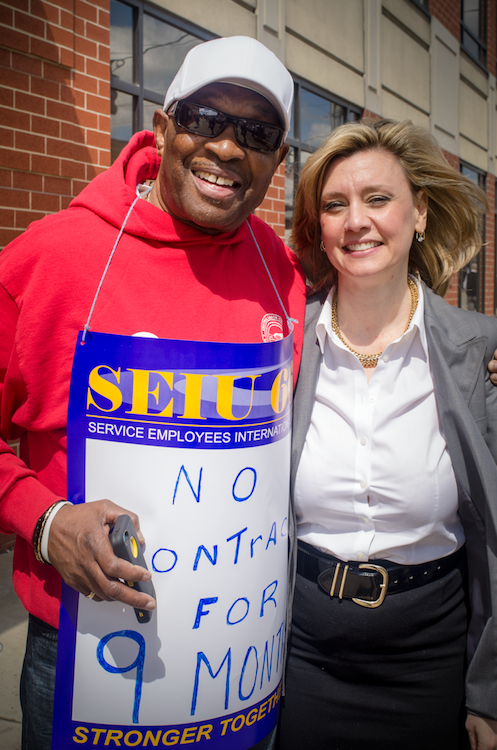 “It’s always important for people to come together. Power comes in masses, and power concedes nothing without demand.”

“Everyone should have the right to negotiate the terms of their employment. You see people in corporate level jobs, they negotiate contracts all the time. They get an employment contract that has benefits and perks. All the workers here want is a fair contract, good wages and decent health care. This is very important to our economy and economic growth — keeping wages up. Organized labor sets the standards for what the rest of the wages people set are, so that’s why it’s really important that they bargain collectively to keep up those levels and support a pro-growth economy. Ultimately, it’s about people being able to represent themselves, being able to support their families, and having a fair workplace contract.”

[Lynnwood Alford of Beaver Falls joins Erin McClelland, candidate for Pennsylvania’s 12th Congressional District, which includes Beaver County, at a rally in support of SEIU Local 668 outside the Human Services Building in Beaver Falls on April 1st. At that time, the workers had been working without a contract for nearly a year and negotiations with the county commissioners were at a standstill. Since then, a tentative agreement has been reached and will be voted on in the coming days.]

Erin Ninehouser
Erin Ninehouser loves photography for its ability to reveal truths and insights that are often too difficult to capture with words. She believes, as Garrison Keillor says through his troubled yet triumphant character Barbara in Pontoon, that “the only sermon that counts is the one formed by our actions.” A native of New Castle, Erin has made her home in Ambridge where she lives happily with her wonderful husband Dave, their three adorable and hilarious cats, and their “old gentleman” dog, Max. Erin is excited to help tell the stories of the people of Beaver County. You can see more of her work on Facebook and connect on Instagram or Twitter.
 Share this article:  Facebook  Twitter
We're on the Front Lines April 16, 2016 By Erin Ninehouser
0
Comments
This Weekend: A Chocolate Sunday April 14, 2016 By Andrew Selby
0
Comments