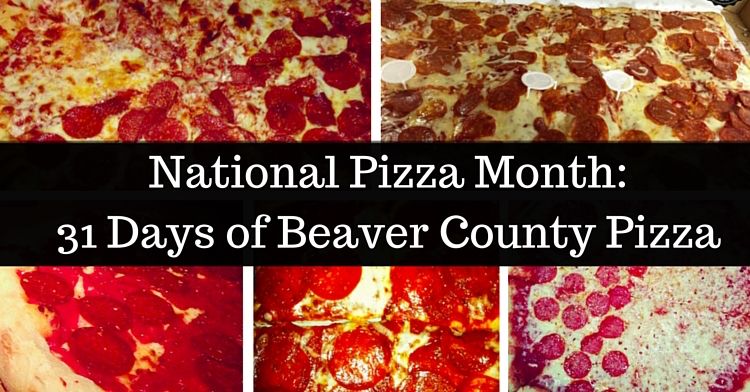 Here we are in October. My favorite month of the year!

The cooler temps lead to comfort food and red wine.. hand knits and fuzzy slippers. The kiddos are finally back into the school routine and have all adjusted to the early bedtime/early wake up (hopefully).

This month we have quite a few reasons to celebrate, including my very own wedding anniversary! Well.. mine and the Misters. But you know.. it was kind of my day.

Anyway. Happy October, folks!! The entire month of October is National Pizza Month, so nothing more really needs said .. that in itself is plenty a reason to celebrate. So… without any further ado…. 31 Days of Pizza, Beaver County Style! (In full disclosure, I have not tried all of these spots, but after research for this article I am sure going to try!)

The best, in my book! Corey disagrees (but he is wrong). It’s crispy, it’s tangy, they load the slices up with toppings. It can’t get much better!

This was the meal I had in the hospital after all three kids. It is that special to me – The meal requested after the three most important moments of my life. Ah. I actually might call them in right now!

The best, in Corey’s book! It is good though. From what I have learned in my short life so far, you are either Team Breezys or Team Buzzis. There is no switching teams.

Right next door to Beaver Brewing Company. Beer and pizza, a match made in culinary Heaven. There is another location near the mall as well!

I don’t know how people can get out of the mall, especially when you walk through the food court, without a big, delicious slice of this.

New on their menu is buffalo chicken pizza!! Andy said it is fantastic. I have not had it yet though. ‘Yet’ being the key word there.

Love this pie! Both the thin and the thick are great, but most recently the Beaverhausen’s have switched to the thick crust… and we get the Special Pizza. Pepperoni, salami, mushrooms, olives, hot peppers and onions. Droool.

Another great choice for thick crust (although again, the thin is pretty darn tasty too!). Location in Chippewa is also great!

AH MAY ZING pizzas here, folks! So many unique offerings! They have one with potatoes, kraut and kielbasa on it called Hunky Alley… and please don’t leave without getting the Italian Stallion!

Wood fired pizza! Delicious toppings and that fantastic wood fired crust. Can’t get that in too many places around here.

We miss you, Chubby!! This would have been the 2nd best in the County under Buzzi’s for me. (Also, Happy Anniversary to the most tolerant husband in all of the land! I love you and yes, I will accept a present!)

This is another BC Pizza Cult Classic. You either love Police Station, or you don’t. I love all pizza, so I might be a bad person to ask (or apparently, to write objectively on pizza).

Cheese under the sauce? What kind of pizza voodoo is that? Delicious, that’s what kind!

A lovely little slice of deliciousness tucked away in the Tusca Shopping Plaza.

Toddler Beaverhausen’s favorite lunch spot. We get a few slices and watch the trucks drive by! Good lunch deals here!

A couple doors down from Center Stage. Andy eats this a lot and loves it! The four-cut round with pepperoni, bacon and onion is one of the staples of his ultra-healthy diet.

A good, traditional choice with white or red sauce and a solid choice of toppings.

Round pie, great selection of specialty pies, including a BLT pie and Al’s White Chicken Florentine. I haven’t tried it personally but it looks pretty darn good based on the research I did online. It is on my to-eat list.

Round or square, red or white… and I have heard the wings are delicious too, but I have never tried this either! It is on my to-eat list as well!

Great choice for a specialty pie! They have a Scampi with shrimp, broccoli, tomatoes and cheese or the Italian Slammer, with meatballs, pepperoni, and extra cheese. The regular pizza is great too.

They have something called the Pig Out Pizza. Another one that I haven’t tried yet. YET.

Geez, I am finding so many pizza spots I have yet to try! The menu online looks fantastic! Thin crust round or Sicilian. Lots of tasty sounding specialty options!

This is great. I loved it since it was in Monaca. It reminds me of a mix of Yolanda’s and Vesuvio’s. That’s equivalent to mixing a hug with a hug. You just get one big hug. That’s what Pacentros pizza is. A big hug.

Right at the corner of 5 Points is Scoochs. We drive past this a lot but have yet to stop. They have hand tossed round and thick Sicilian with a nice variety of available toppings!

This is a great square slice! In the Sheffield plaza, we tried this on last year’s Beaverhausendoughberfest (our very own take on Oktoberfest but with pizza – Get it? Dough-berfest??). We had Pop’s along with Breezys and Villa Di’s. The Teenager picked this as the best!

Another on what is turning out to be a pretty large list of places we have not tried! Based on their Facebook page, the pies look great.

This is within the Family Video! Kids can still experience renting a movie (albeit it a dvd these days, and not a VCR tape) and get a pie all at once.

Lots and lots of options here, including even a pizza hoagie! You could pop off at the longest bar in PA, the Conway Lounge, on your way!

This place has been around for a long time and it has been a good number of years since I have tried it, but it was delicious back then and I have heard it is still delicious!

Ok, someone is going to have to explain this one to me! It is apparently delicious but is only available on special occasions? Mayor Angela “Poobie” Adkins makes it. I would like to try this! Can someone please forward this to Poobie!??! Poobie! I want a slice!

Menu and pictures look amazing, but I haven’t had it! On the list!

This is in the Northern Lights Plaza. We pass it on our way to “good” Walmart. Next time, we are stopping!

This place is going through some serious upgrades since it’s days at the ol’Monaca Hotel! Pizza is on the menu. Looks like a great selection too!

WELL. That made me hungry! If you can’t find a good slice with this list, well I don’t know what to say. Happy October, and Happy Pizza Dreams!!

Anastastia Beaverhausen
Anastasia Beaverhausen is a married, stay-at-home mom of three kids. She was born, raised and still lives in downtown Beaver. Her main goals in life are making sure everyone lives through the week, the house doesn’t end up condemned, and teaching two (so far) small people how to “people” properly. In her free time, Ana enjoys running, knitting and gardening, although free time is a pretty tough thing to come by these days. Follow her on twiter @bcBeaverhausen!
 Share this article:  Facebook  Twitter
Da Burghcast 504: The Pope & Michael Vick September 30, 2015 By Andrew Selby
0
Comments
College is the Goal September 30, 2015 By Erin Ninehouser
0
Comments