Michael Rossi: Ready to Fight for the Middle Class in Harrisburg 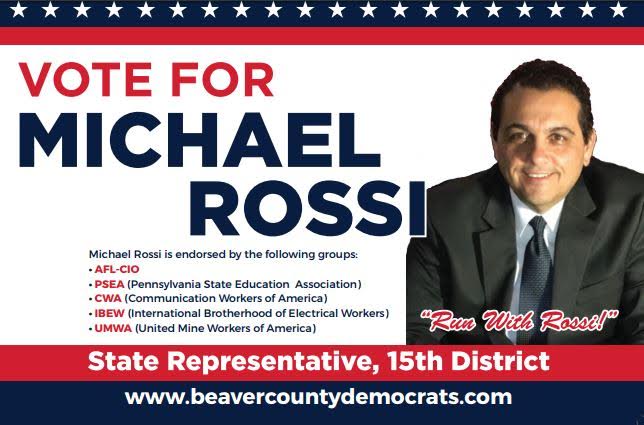 This article is a paid political promotion on behalf of Michael Rossi’s campaign for State Representative. It was paid for by the Run with Rossi campaign. YBC has no official stance on any of the elections, but we believe that it is in everyone’s best interest to get to know each of the candidates.

My name is Michael Rossi, and I am humbly asking for your vote in a few days. For the past several months, I have been working extremely hard to connect with voters, listening to your needs and concerns, while pledging my support, dedication, and service to you, the voters of Pennsylvania’s 15th legislative district.

I am not a politician. I am a hard-working champion of the middle class. I have lived the American dream. I got a great education while growing up in Center Township, an ideal place to live and raise children in western Pennsylvania. My parents instilled in my brothers and sisters what it means to work hard, be dedicated to your family, and to have a strong faith in God. My wife, Mary Jane, and I have raised four children, and we’ve seen our family grow with the addition of three grandchildren. We believe in, and are committed to, this area we call home.

I’ve lived my life always trying to help others. I’ve been fortunate enough to be able to do that, from being the past President of the Center Area School Board, to being on the board of the Central Valley Education Foundation, where we raised money for teacher grants and scholarships for students in the district. I’ve been a champion of workers and laborers as a union representative, fighting for the rights we deserve to uphold fair working conditions and a certain standard of living.

I want to be your next state representative so that I can help you like I’ve helped so many others. The call to public service takes courage, resiliency, and perseverance. This campaign has not been easy. I have devoted time and energy so that I can be best prepared to serve you when I am elected.

Since we began this campaign, I’ve heard from many of you who are not satisfied with your current state representative. You’ve told me he ignores your problems, ignores your pleas for help, refuses to reform certain issues, and most importantly, that he’s not in touch with you and your needs. My opponent and I are vastly different. We have different ideas and policies on basically everything.

I think we can all agree your answer should be a resounding ‘NO’ to all of those questions. I promise to uphold my pledge to stand up for you, to fight for you, and to work for you when I get to Harrisburg. You have a clear cut choice on November 8, and I’m asking for your support. I simply want to make western Pennsylvania better than it has been the past 8 years.