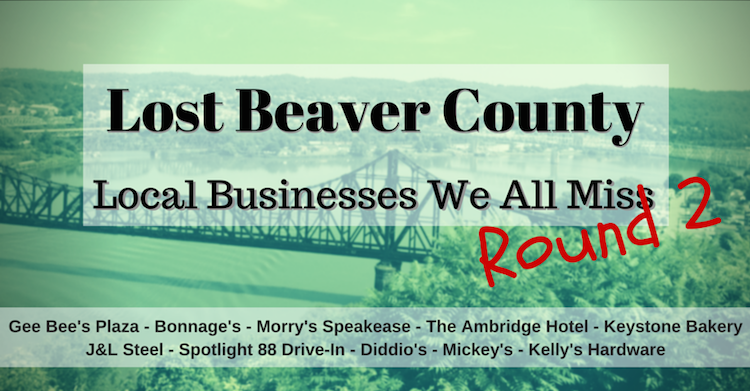 After an overwhelming response from our readers to the first Lost Beaver County article, I put together a second stroll down memory lane. This time we’re reminiscing about penny candy, steel mills, fresh bread and more!

Enjoy this read with us and keep the suggestions coming!

Before it was the giant Wal Mart with the most ridiculous and inconvenient entrance ramps known to man, our local residents referred to it as Gee Bee’s Plaza… and many still do!

This reminds us of a simpler time when shopping was much less stressful and big discount chains didn’t rule the universe.

Go in with a dollar, come out with 100 pieces of candy!! Why is that not a thing anymore?

This was one of my favorite places downtown to go with my dad growing up. It was full of cool little toys and so many delicious treats that it could literally make your head spin… or maybe that’s just all the sugar.

This spot was THE PLACE for night-time entertainment for over 100 years! It went through several names and genres (most notably Morry’s Speakeasy) and Beaver Countians from all over danced to brass bands, jazz musicians, blues artists and local rockers up until ten years ago.

Some of the most notable local performers were B.E. Taylor, The Jaggerz, The Granati Brothers, and Donnie Iris. Not to mention numerous jazz musicians and even Go Go Dancers.

It survived multiple fires, a flood/landslide, and even prohibition where they smuggled in whiskey, wine and beer. Sadly, as the times changed, so did the tastes of our local residents. In the mid 2000’s, this legendary establishment closed for good.

At the corner of 8th and Merchant Streets, the Ambridge Hotel stood tall and proud. It was built in 1905 and is one of the true landmark buildings in our area. It’s also one of the most photographed buildings ever in Ambridge. Whether it was in a horse & buggy or a street car, people visited this establishment from all over the country.

Unfortunately, it was “razed” in August of 1964 to make room for other businesses. It is now a gravel lot next to Miskush Maytag Home Appliance Center (which used to be Jay’s Floor Covering).

Even though the bakery has been gone for over 30 years, the building still stands! Many of our readers will remember passing Keystone and smelling nothing but fresh bread and deliciousness.

Owned by the Braun family for over half a decade beginning in 1926, this is a true place of history right in the heart of Bridgewater. Next time you visit Tinitique Café, take a stroll down memory lane and spare a moment to think of Keystone. You can almost smell the bread again. Almost…

Or “Jane-Ell” as you would pronounce it if you’re from Beaver County, was a HUGE staple not only in Aliquippa, but all of Western Pennsylvania. Over the years it employed tens of thousands of our residents, and is another reminder of the booming steel industry that supported so many of our towns all the way through the early 80’s.

J&L merged with Republic in 1984 to form LTV, and its grounds are now the location of United States Gypsum.

The tornado that tore through the Beaver Valley just about 30 years ago also claimed the entirety of Spotlight 88’s beloved drive-in. While it is now occupied by a flea market and also houses Christmas trees in December, you can still see the rows set up for cars like they are expecting some to drive right in again and catch a flick. Maybe one day they will!

Best. Prime Rib. Ever. Before it was Greg Powell’s, and now sitting vacant, Diddio’s was the place to be when you wanted a delicious dinner out on the town. It overlooked the river AND had delicious food.

I keep hearing rumors that a new restaurant is moving in and opening the place back up… but it’s just a tease every time!

If you live in the northern portion of Beaver County, you’ve gotten a trim or a buzz over at Mickey’s. Vince and the girls have been lining up our young men’s hair for years. They closed so abruptly that my husband stopped after work for a cut and it was gone. Goodbye, perfect hairline.

If you wanted to get the vintage feel and fantastic service of an old-school hardware store, AND stop by to pet the sweetest three-legged puppy ever, you went to Kelly’s down on 7th Avenue.

Rows upon rows of tools and manly things, fresh sawdust on the floor, it was a great local shop that I know everyone in Beaver Falls misses!

Allie is a lifelong resident of Beaver County. She is a 2006 graduate of Blackhawk High School, and still resides in Patterson Heights with her husband Andy and their 3-year old son, Luke. She is a Regional Manager at PLS Logistics and a sports fanatic. You can find her on Facebook as Allie Dixon.