Leaving Nursing Behind: The Story of Lindsay J's Cleaning Service 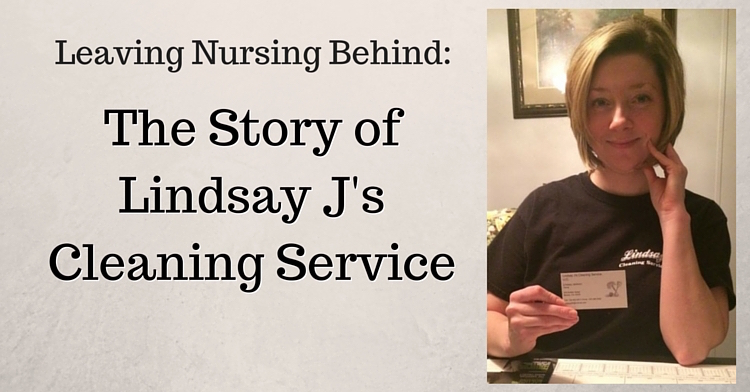 A while ago, Lindsay Jackson was featured on our “People” page (see it here) and her photo got a tremendous amount of feedback. If you read her excerpt, then you have an idea as to why we called her for a follow-up interview.

Do I Really Wanna Do This?

“It was March (2014) of my graduate school. So I’m going to graduate in May. It’s like two months before my graduation and I’m saying to myself, ‘you know the jobs just aren’t there.’”

Lindsay said she thought this to herself during the home stretch of her Nurse Practitioner’s Master’s program at Carlow University. Lindsay had been a registered nurse for 10 years and after getting her Bachelor’s degree from Penn State. She did a lot of clinicals and felt that her skills just weren’t where they should be.

So she decided to go get her Masters, thinking the schooling would help her improve, but it didn’t. She said that after clinical, she just “didn’t feel it.” She would come home feeling whooped and overwhelmed. Mix whooped and overwhelmed with a narrow job market, and Lindsay found herself in a big dilemma, so she turned to God for help.

“I’m very spiritual and I talk to God all the time. I was just having conversations with him saying, ‘I need help. Where am I supposed to be? Where do I fit into this?’ You know, I’ve worked in Cardiology and CPR Certification Houston for 10 years so I thought once I graduated I would go and work for the Cardiologist again because that feels like that natural thing to do, and they had already asked me to come work for them, too. But I knew I didn’t really want to go back into nursing and the Cardiologist who I worked for had just retired, so that really made me think like, ‘Ugh. Do I really wanna do this?’”

Lindsay was still studying for her nursing boards when she went to pay her taxes. She was in conversation with her CPA and started to tell her that she was sick of nursing and “just wanted to clean houses.”

Cleaning was never a chore for Lindsay. She says she has just always loved to clean, because it was something she was always good at. Her parents always told her they could eat off her floors and says her husband thinks she’s a “clean freak.”

Lindsay said she believes timing is everything. And she believes this because right after she said she wanted to clean houses, her accountant pointed to a client across the room and said, “That lady over there, Cindy, is selling her cleaning business.” Which was the best cleaning service in Long Island. Lindsay says she walked right up to her and said “I gotta talk to you!”

Cindy at first thought Lindsay was crazy. She couldn’t understand how a nurse practitioner was going to give that up to clean houses. But as it turns out, Lindsay worked with Cindy’s niece for years in the hospital and after consulting her, she gave Lindsay a raving review. That made Cindy feel better, and she handed over the business.

Lindsay worked with her lawyer for an entire summer and covered all basis in the transition. Lindsay worked with Cindy at one house and Cindy immediately said, “Oh yeah, you got this.” She let Lindsay fly solo from then on, but Lindsay officially took it over on September 1st, 2014. By the reports published on https://www.maidcomplete.com/green-cleaning-phoenix.php, Cindy left her cleaning company with eight commercial and 20 residential clients. Just one year later, it has almost doubled in size, with 12 commercial and 38 residential clients, and Lindsay says that she has given estimates for a few more.

Lindsay says after the picture was posted on the YBC website, she had a dozen calls between Beaver and Allegheny County. That’s a lot of houses and businesses for one person to clean, so Lindsay has hired 13 contract employees. Pretty impressive for a business that’s only one year old.

What’s even more impressive than that, though, is that Lindsay has already expanded her services by adding caregiving to the list last month.

“A lot of my clients are elderly and as I’m cleaning their house, I’m seeing a lot of potential needs. Their gonna have to go places, they have doctor’s appointments, they need to go grocery shopping, stuff like that. And I’m seeing all of this in my mind and I’m like, I just gotta do it – add caregiving to the business.” And so she did. She wrote a letter about her caregiving services and handed it out to the clients that she already cleans for, and the response has been great. She’s got a couple clients now that she helps bathe, dress, and cook for, and then she cleans when she is done.

It seemed crazy to me that someone who was making six figures would give that up to clean houses and take care of the elderly. Lindsay nodded in agreement. “Some people are like, ‘Why would you do that?!’ I’m scrubbing toilets, you know? So people think it’s beneath me. But they don’t get it. I’ll just break it down. As a nurse I would make $33 an hour. As a nurse practitioner, I could be making 100 grand a year. I’m not touching that – not even a fraction.”

So then, I asked her what it is about cleaning that motivates her. She said that when she resigned from her job at the hospital, she thought a piece of her would be missing, but it wasn’t. And when she was going into people’s homes, they would ask her all kinds of questions she would get as a nurse, so it filled the void. She also says she likes the freedom. “I am so much freer because I am being who I am. I love people, I love caring for them. I am a servant. I am a servant leader and I get to live that every day.”

And for Lindsay, being a servant leader is living out her childhood dream. “My mom was a caregiver, so that was just in me. I just never really thought about it. It was just like, ‘I want to be a caregiver too, so yeah, I’ll be a nurse.’”

It’s a sure thing that her business has taken off and Lindsay is living out her dream. She is still learning how to go about business-ey things like supplies and inventory, scheduling, and hiring new employees, all while managing and working simultaneously.  Hiring has been her biggest challenge, and finding good, reliable, honest employees is harder than she thought. But she says through it all she has learned a valuable lesson, and that is to “let everything roll off your back and do the best you can. Tomorrow is a new day. And you can’t stress over the small things because it will just eat you up inside.”

Lindsay definitely isn’t letting anything eat her up inside, because she already has big plans for the future: her own home health care system.

“Before, when I pitched this idea to some of my old co-workers they all said, ‘What the heck are you doing? What is happening here?!’ and then they saw my picture on the site and now they’re all like ‘Woah. I get it now. We want to come work for you.’”

And one day when that comes to fruition, Lindsay says “it will be an honor.”

Just fill out your contact info and ask Lindsay anything you like and she will be happy to answer!