How to Calm Your Pet's Anxiety Without Prozac 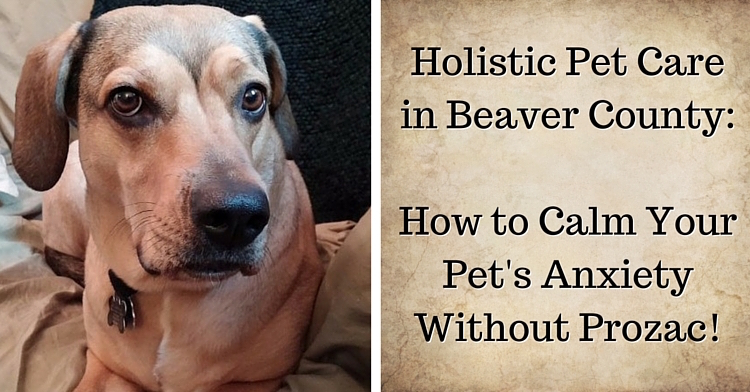 In 2011, we brought Mabel home from the Beaver County Humane Society. She was a stray, found in Beaver Falls, and though they thought she was around one year old, they had no further information on her history.

From the beginning, she was an incredibly sweet dog – loving and playful, but at times a bit skittish and prone to pretty intense episodes of separation anxiety. Fast forward four years: Mabel did not outgrow her separation anxiety.

She was crated while we were at work, otherwise she caused massive destruction throughout the house, an action totally at odds with her behavior while we were home. She developed a pretty nasty fear of thunder and lightning.

Most recently, she started waking us up at 2 or 3 in the morning in a total panic, as if she had to go to the bathroom immediately. This was occurring around three times a week, and though you could hear her stomach grumbling, she didn’t actually have to go to the bathroom.

Convinced something was very wrong, we took her to the vet. After a physical examination and bloodwork came back normal, our vet declared even this behavior to be the result of anxiety – not, unfortunately, uncommon in rescue dogs. Also, he said, left untreated, anxiety in animals tends to get worse with age, not better.

First he offered to put her on Prozac. I am sure Prozac has helped many pets, but I wasn’t ready for that kind of pharmaceutical intervention just yet.

His second suggestion…get another dog, either a puppy or a senior dog to keep her company, not a dog her own age she will feel threatened by. (I’m working on this one, readers. I’ll keep you posted if we get her a puppy.)

This I could get on board with, and it got me thinking… What other holistic alternatives are out there for our Beaver County pets?  Without further ado, my findings:

We take Mabel to the Beaver Animal Clinic, where the herbal supplement was recommended. Besides Chinese herbal medicine, some of the vets also have training in acupuncture, chiropractic and massage therapy, and natural nutrition.

Beaver Agway has a great assortment of natural and organic pet foods and products. Also, their staff is just crazy knowledgeable about anything I have ever asked them.

PetSmart can be a good place to start your quest for more natural solutions.

They sell the Thundershirt – an option for dogs that have a fear of storms. The “shirt” wraps around your pet, providing constant (but not tight) pressure, akin to swaddling a baby.

The Thundershirt did not offer Mabel much comfort during storms, but did seem to lessen some of her anxiety during car rides. Also, she loves wearing it and looks adorable in it.  PetSmart offers a range of pheromone sprays and collars.

According to the statistics put forth by Blue Buffalo, it would appear that pheromone products are thought to mimic the natural pheromone of the animal to relieve stress or prevent some behaviors, such as your cat scratching your brand-new couch. At Mabel’s last vet appointment, they used a spray that mimics the pheromone nursing mothers release…a few spritzes on a towel did indeed calm her a bit.

PetSmart also offers a variety of natural and organic pet foods, and an assortment of vitamins and supplements.

The list of illnesses and conditions that can be helped using alternative remedies could be an article unto itself, so I urge you to do some research to determine if any of them may be a good fit for you and your pet. Talk to your vet for recommendations!

Often used alongside traditional veterinary methods of treatment, the addition of holistic pet care aims to treat your pet as a whole, rather than focusing on symptom alleviation…a practice that can have truly remarkable results.

I know…you guys are dying to know how Mabel has been doing since she started taking Calm Spirit, right?  Within a week of starting the supplement, she was sleeping through the night again.

Within three weeks, we’d stopped crating her while we were at work. She still doesn’t love thunderstorms, but she handles them more easily than she used to.

All in all, she’s clearly a happier dog…I think we’re ready for a puppy now, don’t you?

Abby is a life-long resident of Beaver, so she is thrilled to be a part of this project. She loves this little town of ours! She lives in Bridgewater with her husband, Matt, and their favorite topics of conversation, their dog, Mabel, and their black cats, Ozzie & Gus. When she’s not busy hunting down stories to entertain you guys, she can be found with her nose in a book…or eating ice cream…or both. Usually both.