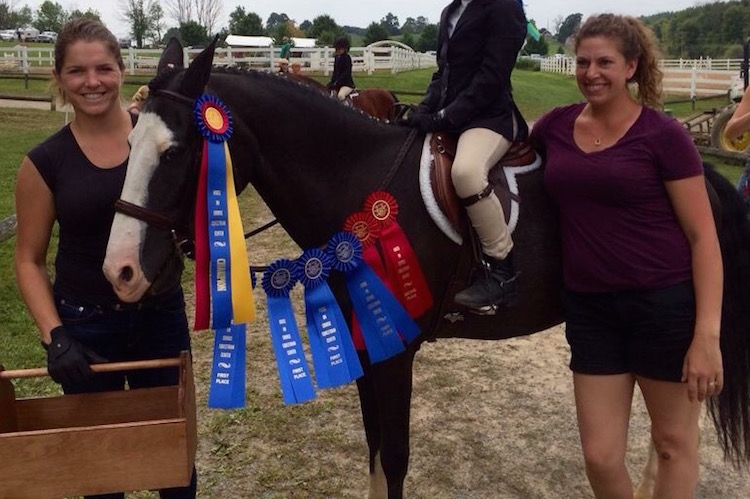 When Lexy Reed was three years old, her parents told her they had a surprise for her. She walked downstairs and standing in her kitchen, yes kitchen, was every little girls dream: a pony. She named him “Popo,” climbed on top of his back, and rode him out the front door and down into the barn. From that moment on, Lexy knew what she wanted in life: a horse farm of her own.

Lexy grew up on her father’s farm in Wampum, so she always had a love for animals. They had cows, pigs, chickens, turkeys, lambs… you name it, they had it, but she had always loved the horses a little bit more.

Her parents took her out on tandem trail rides but she insisted she learn how to properly ride a horse by herself. So when she was eight, her parents signed her up for lessons at a real horseback riding farm that was located just up the street.

This is where she learned the basics of riding – walk, trot, canter, and how to jump over fences. This is also where she met her best friend, Brooke.

Brooke Beatty-Briggs grew up on a farm as well. Her parents raised Morgans (Morgan is a breed of horse) on their land in Beaver and trail rode throughout the woods on their property. Just like Lexy, Brooke wanted to learn to jump, so her parents signed her up for lessons – at the same farm where the Reed’s had enrolled Lexy.

As soon as the pair met, they instantly became best friends. Lexy and Brooke not only started taking lessons and going to competitions together but they had sleepovers, shopping sprees, and went on family vacations together, too. 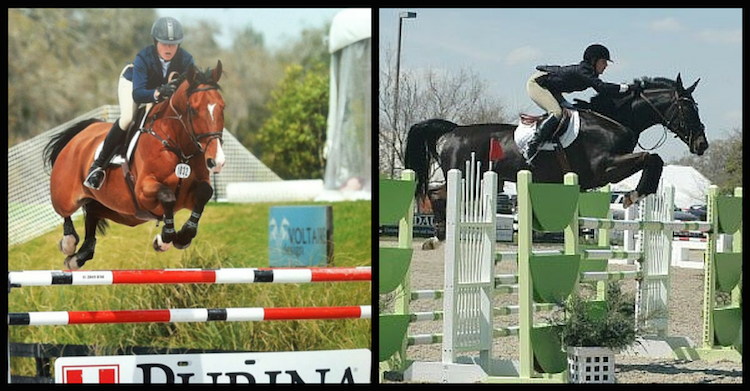 Both girls really got into competitions and they showed their horses locally a couple times a month. Lexy was repeatedly blowing away her competitors so just before her freshman year of high school, she traded in the local scene and headed down to Ocala, Florida for one of the biggest competition circuits in the United States.

She showed her horses every single weekend for four years straight and won almost every title and award a Junior Rider (a non-professional rider under 18 years of age) could possibly earn, including the prestigious Best Child Rider Award, which she won three years in a row from 2003 to 2005.

Lexy’s success as a Junior Rider lit a blazing fire underneath her, so upon her high school graduation in 2007, she packed up and moved once again, only this time, to the horse capital of the world, Holland.

Lexy got a job in The Netherlands working for a show and sale stable. Her job was to exercise the horses, compete in the shows, and in the end, make a sale. In Europe, the hype of horseback riding is the equivalent to that of football in America, so the sport is taken very seriously. After two years in Holland, she was presented with an opportunity to work and train with an Olympic rider, so she took the job.

Lexy started competing in the super high level stuff and eventually made her way into Grand Prixs, which is where exclusive riders compete at the highest possible level. She rode her way entirely through almost every country in Europe, competing at some of the biggest competitions in the world. She did this for another two years until she became homesick, in which she then packed it up and came back to the States to work at her family’s business. 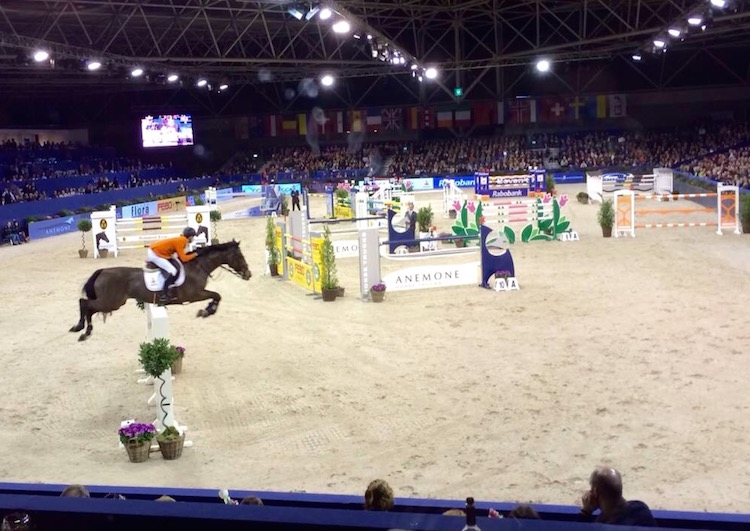 While Lexy took on Florida and Europe, Brooke stayed showing locally throughout high school and college. And she was very successful as well, making four appearances in the national riding finals. In 2003, she and her horse, G.I. Jane, had enough local points to make it to the Pennsylvania National Horse Show in Harrisburg, where they placed 12th out of a pool of about 100 riders. Brooke rode here and there after that but was mainly focused on graduating from college.

Flash forward to 2013 when the girls got a phone call from a friend asking them to take in a horse when its owner was no longer able to take care of it. They both agreed, thinking that getting back into riding would be fun to do together since one, that’s what brought them together in the first place and two, they both had taken a couple years off.

Since Lexy’s father’s farm was at maximum occupancy with cows, pigs, and chickens, they took their new four-legged friend to Brooke’s parent’s farm. They started riding him every day and eventually began taking him to local horse shows too. They were having a ball. After a couple inquiries about giving lessons, they decided to try and start what they had dreamed of as little girls…a horse business of their own. 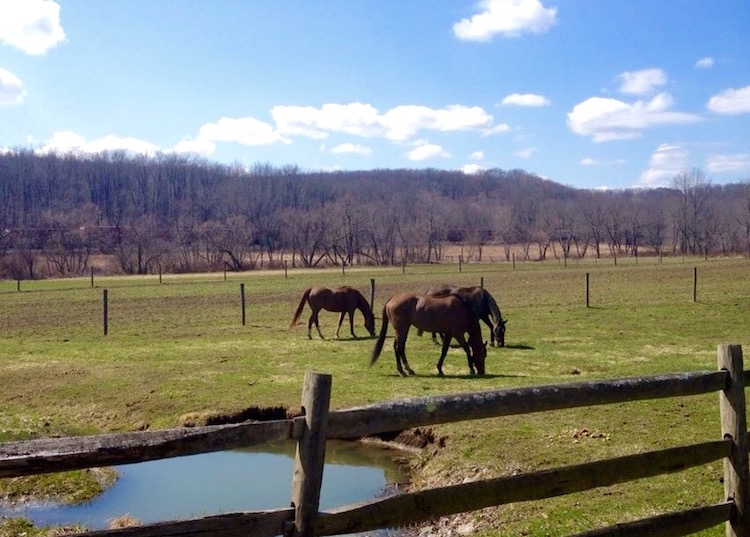 Lexy convinced her father to move the turkeys to make room for a couple horse stalls. She started getting calls about boarding rates, so she asked her dad for a few more. He was hesitant to let his daughter take over his farm, but as time moved on and animal numbers started to dwindle down because of all the hungry people, the stalls were filled with horses before he could even say no.

Lexy then turned one of the pastures into a riding arena and everything kind of fell into place from there. Before she knew it, every stall in the barn was full. Brooke was there to help Lexy every step of the way and was an instrumental part of getting the horse farm up and running. 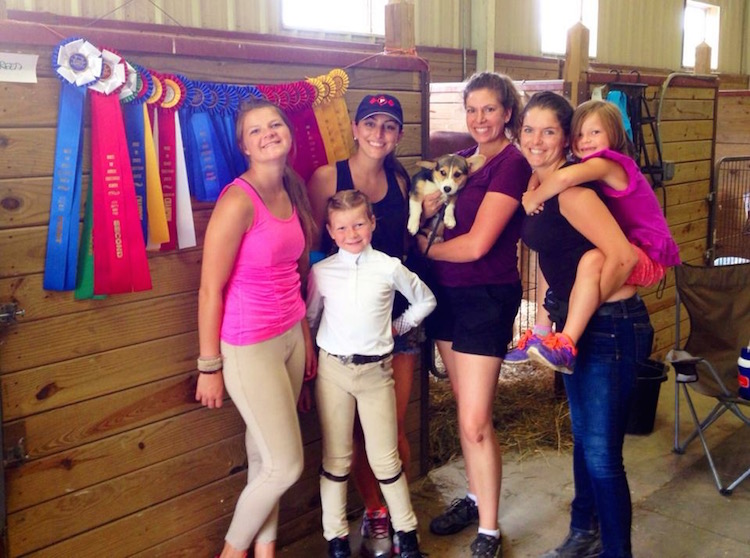 On January 1st 2014, Lexy and Brooke made their partnership official, and named the farm Twin Lakes Stables, after the two identical lakes in the back of the farm. Lexy’s riding resume is unmatched to anyone else’s in this area, so she turned professional and took on the role of Head Trainer. She trains the young horses to jump over obstacles, gives lessons to students of all ages and skill levels, and coaches at horse shows.

Brooke is the barn manager and is in charge keeping Lexy organized and all of the paperwork, ranging from ordering the horses food to scheduling blacksmith and veterinary visits.

Together, the two make an unparalleled team. Their barn is full of happy horses and riders, but they say that isn’t their favorite part. What they love the most is the little family that has formed inside their barn. Horse owners treat each horse as if it is their own and the girls see each other like sisters, not competitors – exactly the same way Lexy and Brooke saw, and still continue to see each other today.

With the help of her best friend, Lexy has surely made the dream she first had at three years old come true.

If you would like to inquire about horseback riding lessons, horse boarding, or have general questions about Twin Lakes Stables, please check our their Facebook page, or give Lexy a call at 724-462-4042.

Maura Mendicino
Maura is a lifelong resident of Beaver County. She graduated from Center High School in 2009, and now lives in Patterson. When she isn’t marketing new technology or writing for YBC, she enjoys spending time with her family, horseback riding, and hanging out with her super cute Cavapoo, Derby. You can follow her on Twitter @mauramendo.
 Share this article:  Facebook  Twitter
I’ve been a priest 34 years... March 31, 2015 By Elena D'Agostino
0
Comments
Helen Rose Revay Kolesar, Monaca March 30, 2015 By In Memory
0
Comments