He Describes Every Mission He'd Flown 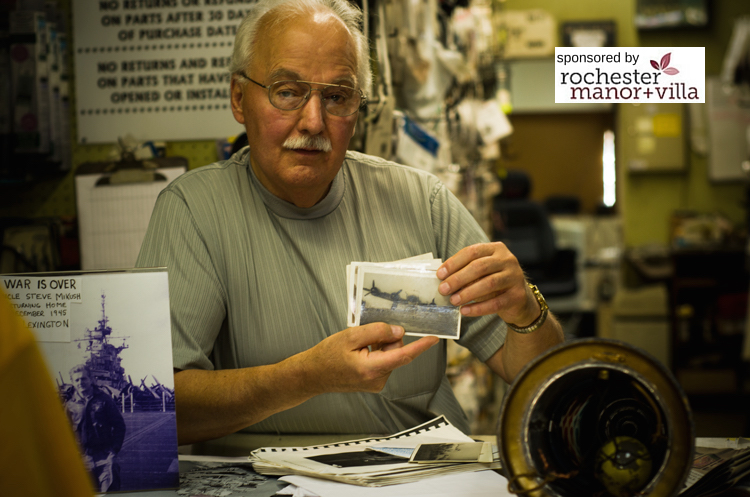 “I have the Captain’s log of a B-24 that flew missions over Europe. These are the kinds of planes that he [his cousin by marriage who served in WWII] repaired. When you read that Captain’s log, he describes whether or not they hit their mark, how much they missed it by, so the next plane in the formation would be able to get the target.

In here he describes every mission he’d flown. They show you how they make their radius for their return trips and how they line up so they can’t be hit as easily by the Germans.
[My cousin] was in England during the Blitz. They were checked into a hotel, and the air raid whistles went off, and that means you go for cover. He said they waited til the last minute to go (you have so many minutes to find a place to hide). When he came back, everyone was saying he was dead because the side of the building he was on was destroyed, but he said ‘Hey, I’m right here!'”

Erin Ninehouser
Erin Ninehouser loves photography for its ability to reveal truths and insights that are often too difficult to capture with words. She believes, as Garrison Keillor says through his troubled yet triumphant character Barbara in Pontoon, that “the only sermon that counts is the one formed by our actions.” A native of New Castle, Erin has made her home in Ambridge where she lives happily with her wonderful husband Dave, their three adorable and hilarious cats, and their “old gentleman” dog, Max. Erin is excited to help tell the stories of the people of Beaver County. You can see more of her work on Facebook and connect on Instagram or Twitter.
 Share this article:  Facebook  Twitter
Bill's Valhalla: Restaurant & Social Lounge November 16, 2015 By Andrew Selby
0
Comments
Adoption Rocks! Making a Difference in Beaver County November 15, 2015 By Lauren Walker
0
Comments