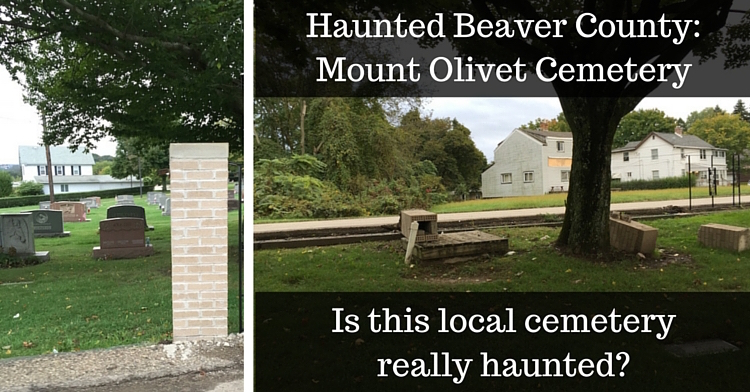 As some of you know, I live in the LBC. No, not the place Snoop Dogg calls home. That would be Long Beach, California. I’m talking about the other LBC – Lower Beaver County.

I frequently travel along Brodhead Road, one of the main corridors that runs through the heart of Center, Aliquippa, Hopewell, and even into Moon Township. For several years, I have driven past Mount Olivet Cemetery on a weekly basis. Quite a few of my relatives are buried there, including my paternal grandparents.

Every time I drive by the cemetery, and I mean every time, a sizable portion of the brick and fencing that runs along Brodhead is completely destroyed, wiped out by car accidents. So, with Halloween around the corner, I want to ask the readers of YBC, especially those that live in the Aliquippa/Hopewell area, what’s up with Mount Olivet Cemetery?

Breaking Down the Facts

Here’s what we do know: there are burial grounds on both sides of Brodhead Road.

On one side sits the St. Elijah Serbian Orthodox cemetery. The Orthodox Church, commonly made up of Greek, Serbian, and Ukranian, is very closely related to the Roman Catholic Church.

A Lack of Information

In 2012, a woman died after her car struck the main granite wall to the entrance of the cemetery. But other than that, I was unable to find any other information about Mount Olivet, including the mysterious destruction of the fencing that occurs in almost the exact same location every time.

The part of the fence that gets blown out sits on the southern end of the cemetery, closer to the “Five Points” area. It’s on a fairly straight part of road, with no real significant curves, bends, or blind spots. This has been consistently happening for a few years now. As soon as the brick and fencing would get restored, another car accident would happen, taking it out again.

I have heard rumors about what causes these accidents.

The main one I keep hearing over and over again involves a woman buried on one side of Brodhead, either in the Serbian Orthodox or Roman Catholic side, and walking across Brodhead to see someone who is buried on the other. Back in Maura’s original ghost hunting article last February, one commenter wrote:

“I had always heard that people would also see a Black Hearse pulling out of the Mt. Olivet side and that is always the side that is hit.”

Another commenter had a different story:

“What about the story of the two cemeteries on Brodhead Rd – Mt. Olivet and St. Elijah….the story was featured on Unsolved Mysteries years and years ago lol I may need help remembering the story but something about a boy and girl one (each lain to rest on one side or the other) were on their way to prom when they were hit by a drunk driver and never made it to prom…every year at prom time a passerby sees the two meeting in the middle of the road and swerves to miss them, hitting into the iron fence…which used to be ordered ahead of time for replacement.”

If this is true, then it would make sense, because the same exact location continues to get nailed time and time again. I am asking the readers of YBC to help solve this unsolved mystery.

Who knows anything about the paranormal activity at Mount Olivet? Do you know anyone who has ever been involved in an accident there? If so, leave your comments below!