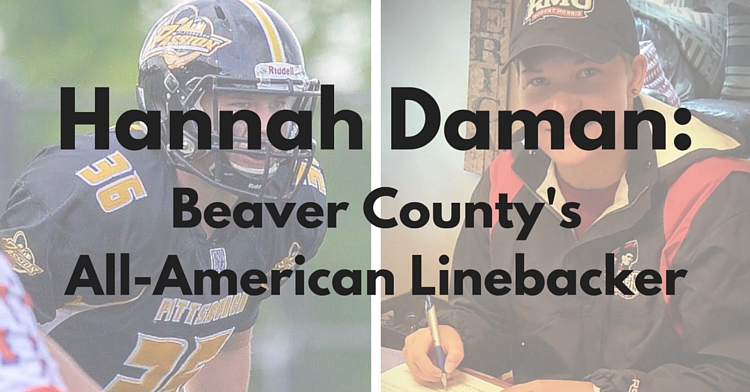 For a while now, Marc has been the only one on the YBC team to talk about Beaver County sports celebrities. Well, to this I say… Move over Grandinetti, cause Beaverhausen is on top of the newest celebrity!

That celebrity is Hannah Daman. She is a 2015 graduate from Central Valley and is crushing it on the football field.. And not how you would immediately think. She is not flipping on the sidelines for a player tackling the opposing team. No, no. She is the one taking them down! Girl power, Hannah!! I fist bump you for being awesome!

Hannah told me that she has loved football for as long as she can remember.  She always went to watch the high school games when she was younger and she was probably one of the only kids actually sitting in stands, watching the game! She decided, unbeknownst to her parents (in my best Mom voice – HANNAH!) she decided to sign up for the boys team at Central Valley at the end of her Sophomore year.

So there she was, never playing on a team before but knowing that she wanted to… going for it and signing up! We Beaverhausen’s like to call that ‘Go big or go home’.  Although she really didn’t know much about what she needed to do, where she needed to be on the field or what position started where, she went to every camp and every practice and learned everything she could. She pushed through and ended up a Wide Receiver / Cornerback for two years in high school. 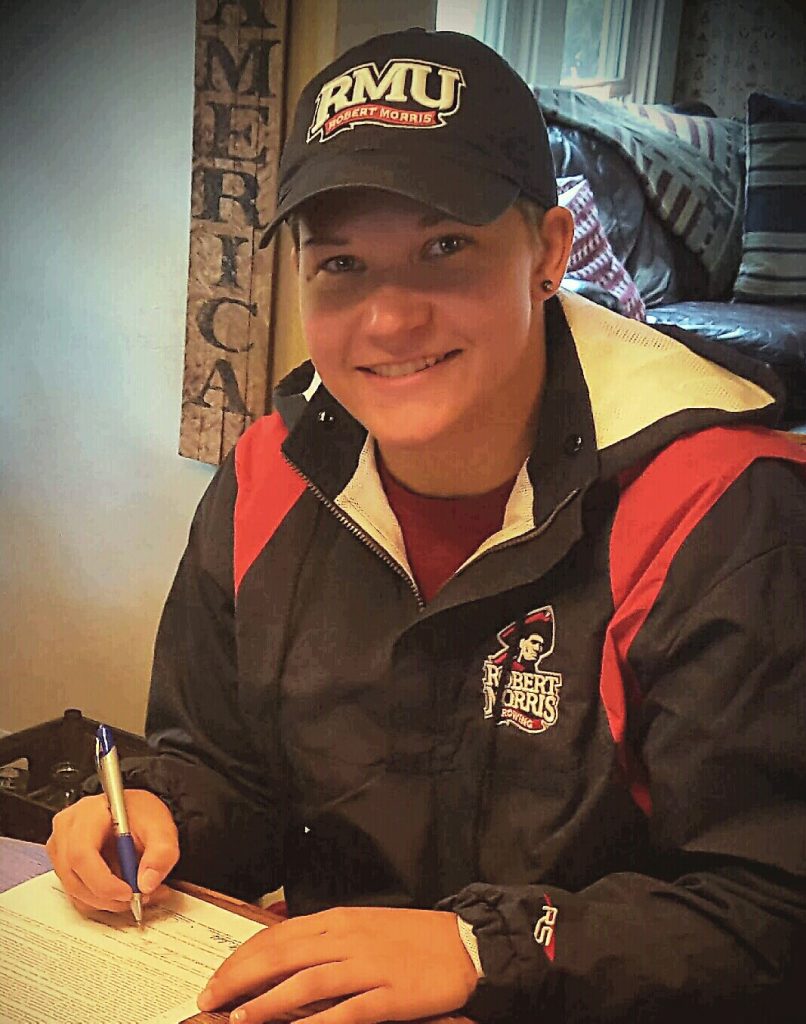 From there, the next logical step after high school was college. She decided on Robert Morris University. Bobby Mo, to those who know. Anyway, in her freshman year there she got recruited to play as a Walk On Novice Rower.  Again Hannah didn’t know where to start – although here, instead of walking onto a field, she was hopping into a boat. I would recommend she add ‘Highly Adaptable’ and ‘Quick Learner’ to her resume. From Walk On Novice, she was recently offered an Athletic Scholarship with the RMU Colonials Division 1 Women’s Rowing Team for her Sophomore year.

So she has rowing, a football history, she loves sports. What does that all equal? Her move into the Pittsburgh Passion. If you don’t know what this is, it’s a women’s full contact football team! It has been around since 2002 when the team didn’t even have an indoor practice facility. Nobody paid too much attention to the Passion back then, but things sure have changed.

A mere 14 years later, they have moved from the IFWL (that’s the Independent Women’s Football League) to the WFA (Women’s Football Alliance) with 23 other teams across the National Conference.

Hannah began the season as a starter at Inside Linebacker and Special Teams. From here, she kicked some serious butt. She led the Passion’s Defense with 95 tackles for the season (whaaat?!!? 95?!) and she ranked 2nd overall in the whole league in tackles.  THE WHOLE LEAGUE. Out of 45 other teams, she was second. Boom, Hannah!! Get. It. Girl!

What does all of this lead to?!  Well. Let me just tell you. The 2016 WFA All-American Team has selected Hannah, out of over 1,300 other players, to their 1st Team Defense, Linebacker. This is such a huge honor for Hannah and she is so incredibly thrilled to represent the Passion (and, you know, to kick some butt too!).

Pittsburgh is actually the host city of the WFA All-American Game this year. It will be played during Championship Weekend, on July 23rd at West Allegheny High School. Kickoff is set for 11 am.

So plan on cheering on our very own hometown All-American girl Hannah Daman at this All-American game!! Good luck Hannah and the rest of the players! And I guess you can probably stay tuned for an updated ‘Top 5 Athletes in Beaver County’ list from Marc. It’s ok because we all know who reported on Hannah first. Winky wink, Marc!

Anastastia Beaverhausen
Anastasia Beaverhausen is a married, stay-at-home mom of three kids. She was born, raised and still lives in downtown Beaver. Her main goals in life are making sure everyone lives through the week, the house doesn’t end up condemned, and teaching two (so far) small people how to “people” properly. In her free time, Ana enjoys running, knitting and gardening, although free time is a pretty tough thing to come by these days. Follow her on twiter @bcBeaverhausen!
 Share this article:  Facebook  Twitter
Prayers for Peace and Racial Reconciliation July 16, 2016 By Andrew Selby
0
Comments
We Don't Want to Strike July 15, 2016 By Erin Ninehouser
0
Comments