A new breed of board games January 19, 2018 By Ana Beaverhausen
0
Comments

Since the weather has been slightly unbearable, finding inside things to do is a high priority these days, both for the kiddos and the grown-ups. A friend of mine suggested a few board games to try out so I figured I’d give it a whirl! These aren’t your normal Life, Monopoly, Connect 4 kind of games. A new breed of – dare I say – gourmet board games lives now. They are filled with fantastic art work and pieces, and the games themselves take a good bit of thought. Stick to Uno if you are looking for a mindless way to spend some time, but if you want a fun night with some thought, give these a chance!  Did I miss any?  What are your favorites??

And we are off to Castle Toys & Games!

Castle is a great local spot for your toy and game needs! They have a great selection of things for kids of all ages. On this specific trip, I am on a mission and beeline up the huge staircase to get to the games! 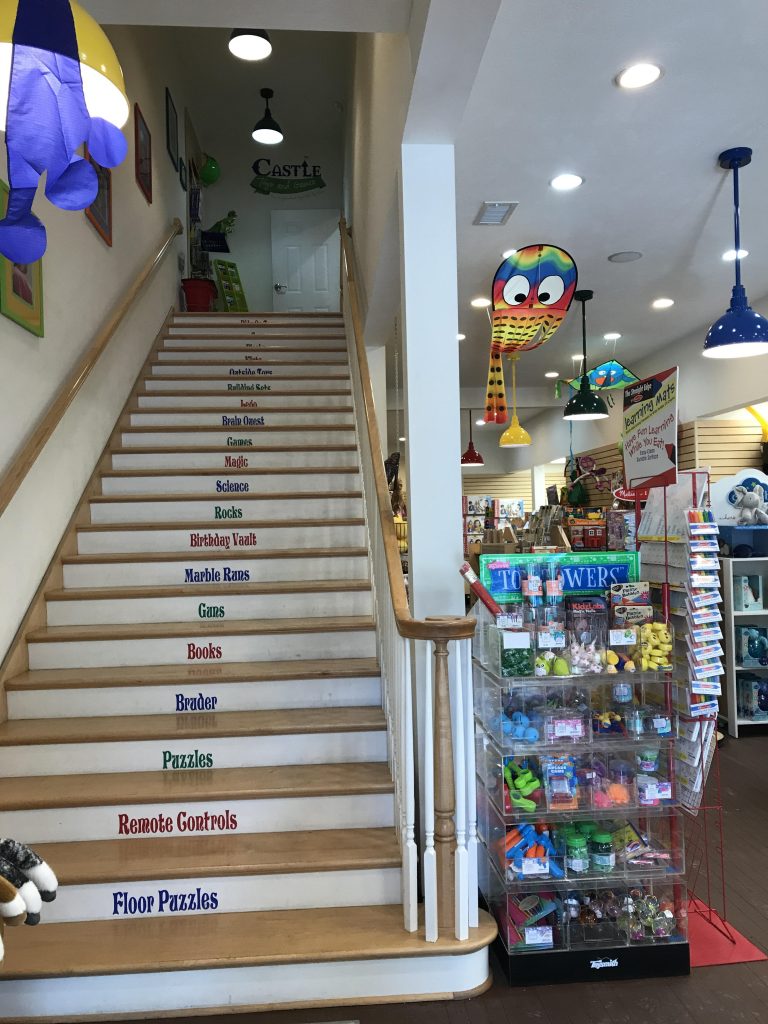 Up the stairs and to the left is the game room. They are organized by age groups and have things for kids as young as 3! 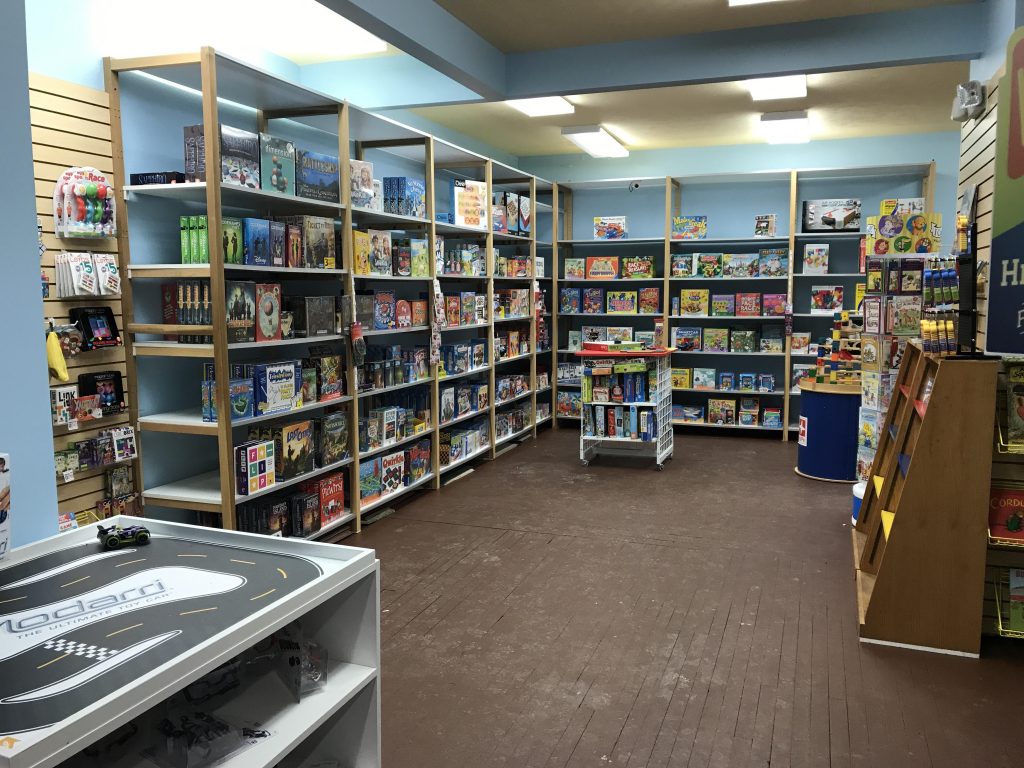 I was able to narrow my choices down with the help of the interwebs and came up with the following as the ‘Ana Beaverhausen’s Official First Round Best Games, Part 1’.  Long names mean they are important, right? 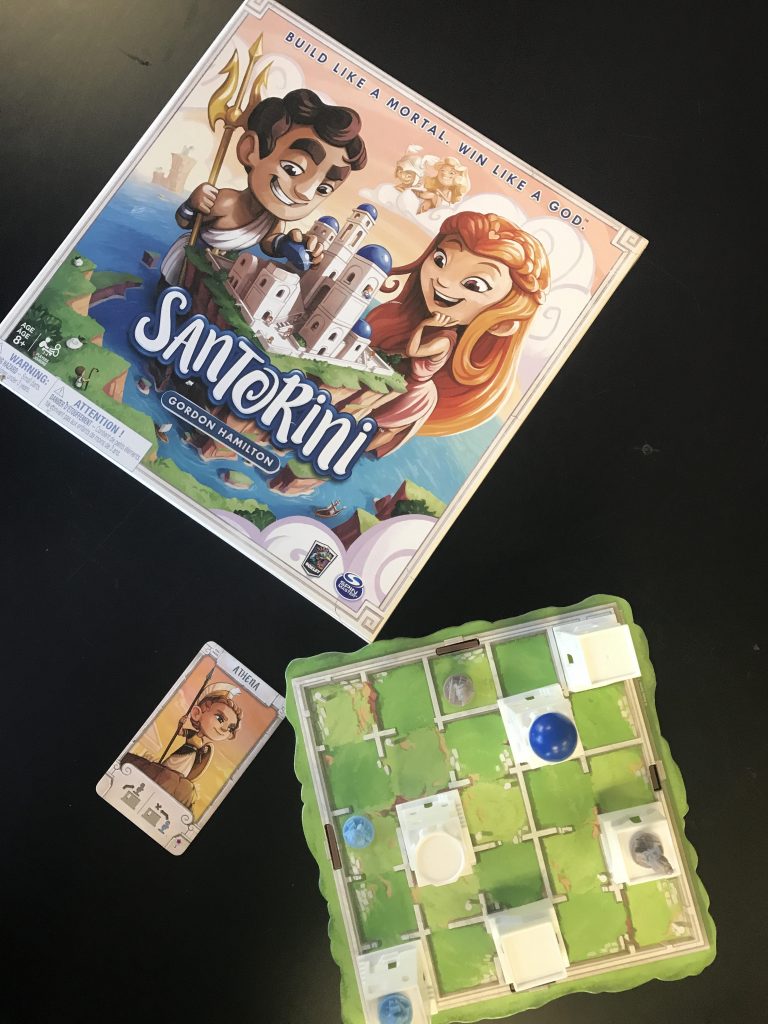 This is a great game for two people that can be played with both kids and adults.  My five year old caught on pretty quickly, which is huge. There is nothing like arguing over fun, amiright?  Anyway.  The goal of the game is to block other players from building in the beautiful island of Santorini. The first person to reach the third level of a building wins. Sounds easy – but not so much! There is a strategy behind it that I have yet to figure out, but my 5 year old seems to have gotten it down. That kid kicks my butt each time. Sigh.   The game play is always the same, however there are god and hero cards that will vary what powers your specific builders have.  Great game, for sure. 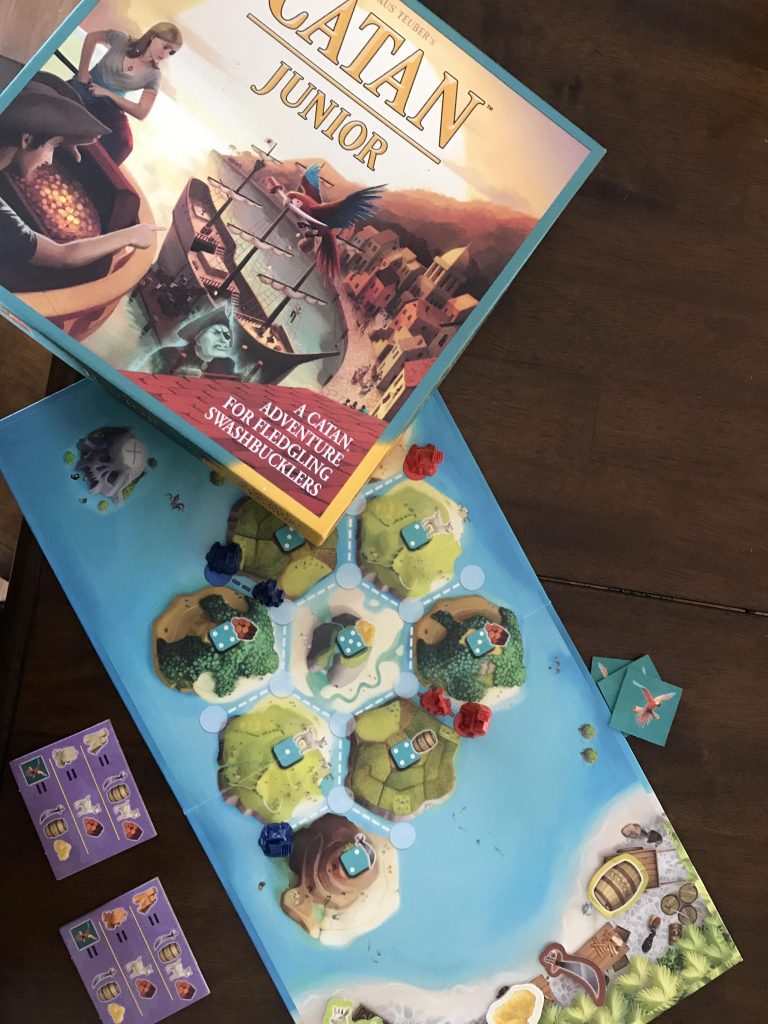 These games are a fantastic starting point into the designer game arena! I played Catan Jr. first, because as I mentioned above… the 5 year old. It wasn’t as easy for him to catch on to as Santorini, but after a few rounds he picked it up. It also helped me figure out the big guy version a little easier, so that was nice! In either version, you are gathering resources. In the adult version, you are building cities, settlements and roads. Each is worth a different amount of victory points, and the first player to get to 10 victory points wins the game. For Catan Jr., it is a little easier to play. Resources are used to build pirate hideouts and ships, and the first person to have 7 pirate hideouts wins the game. 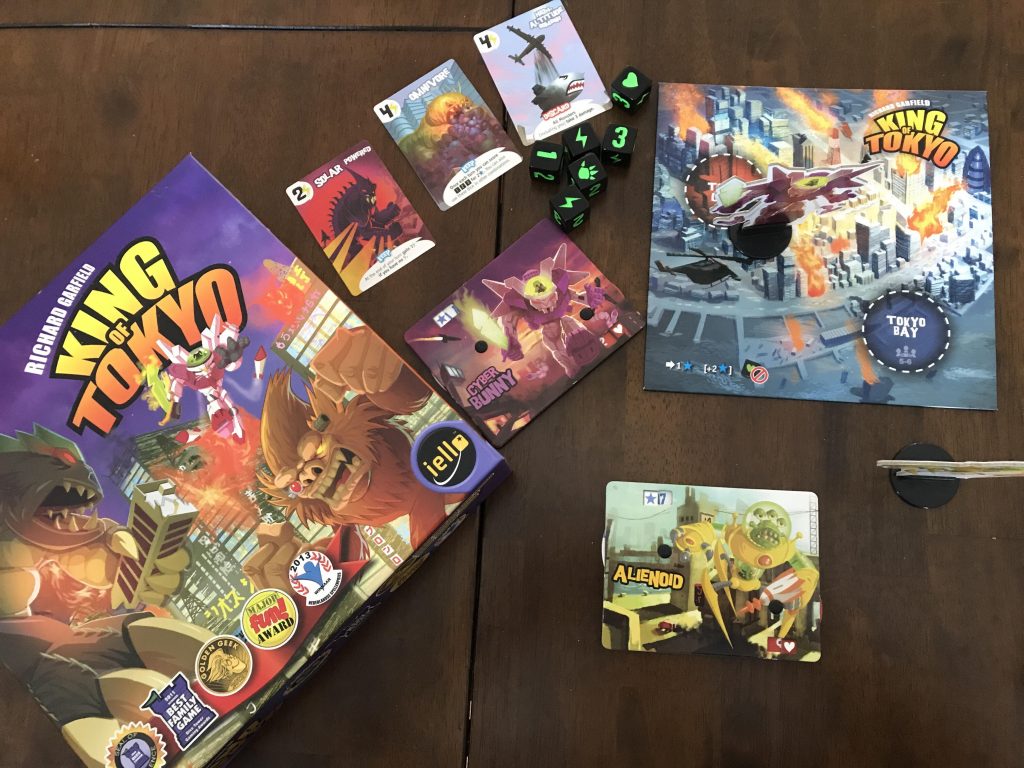 Five year old loooooooved this one! First off, you get to play as a monster. That took him around 30 minutes to figure out which monster he wanted to be.  After that, the game play was nice and easy! Roll the dice. If you get a claw, you attack the other player. Roll a heart, you heal yourself (unless you are in Tokyo. There is no healing yourself in Tokyo!). Roll numbers, collect stars. Finally, roll lightning bolt and collect cubes that you can use to buy cards with special powers.  The first one to get to 20 stars wins and alternatively, the first one to run out of hearts loses. Adorable game. Loved the monsters. Loved the game play (until the toddler came in and Godzilla stomped all over it eye roll). 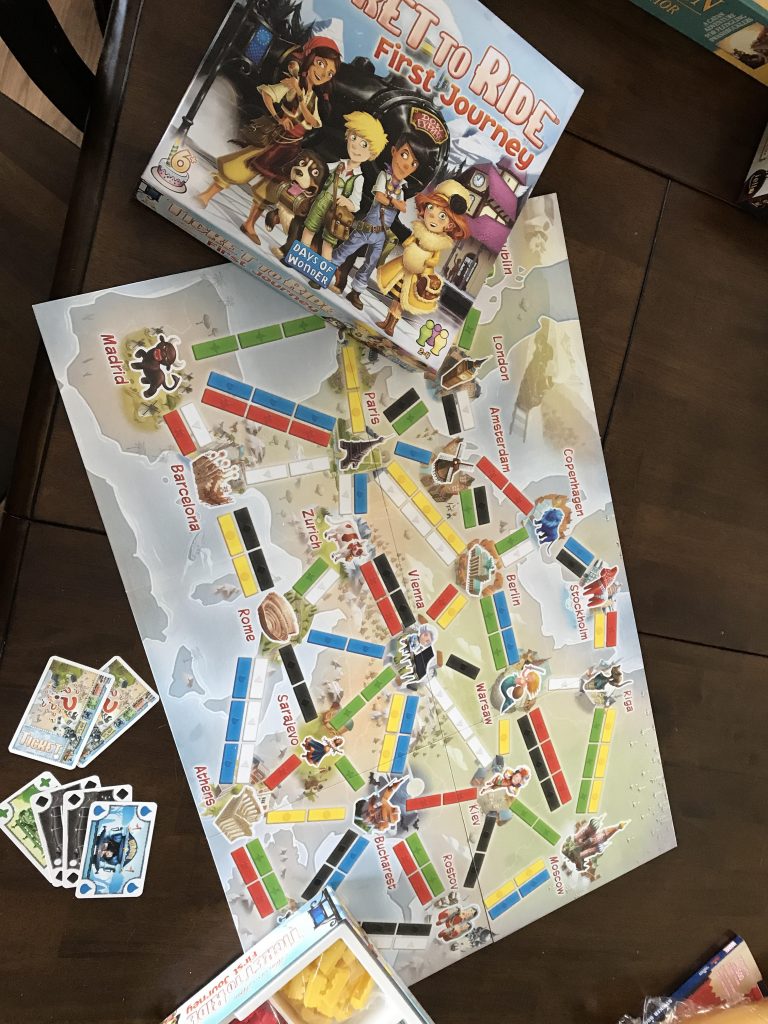 This game has been getting a ton of attention lately (if you are looking for game stuff, of course…. it’s not hitting KDKA or anything out of nowhere).  The game play is pretty simple once you get it. You get a ticket with a route that you then try to secure with your trains. The kid’s version (ie, First Journey) is nice because it has the city name on the card and board, but it also has a picture. So kiddos that aren’t reading quite yet can play with no issues. Game play goes by collecting train cards and using them to ‘buy’ your routes. Complete a ticket card and you keep it. Complete 6 tickets and you win! OR, use all of your trains and you win! I have not had a chance yet to play the adult game but am looking forward to trying it. Apparently it has longer routes and more detailed game board.

So, that’s it! The first list! For the next go-round, I want to try Pandemic, Around the World in 80 days and Exit the Game – a one & done version of an escape room! Ooooo! You can see what else Castle Toys & Games has to offer in person on Third Street in Beaver or online HERE