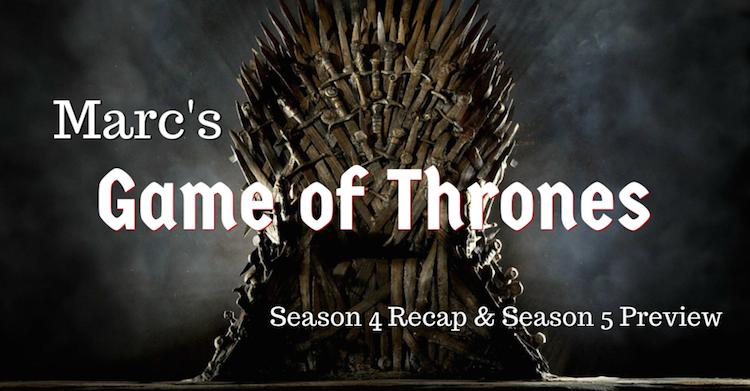 The most popular show in the history of HBO, “Game of Thrones,” is set to make its return to the small screen on Sunday, April 12, at 9 pm. The season five premier will launch what promises to be its biggest and most ambitious season yet.

Most fans know the series is based off of George R. R. Martin’s five-novel fantasy series, A Song of Ice and Fire. Martin plans to release the sixth book in the series, The Winds of Winter, sometime in the near future, although no one really knows when that will happen. The seventh and final book, A Song of Spring, will follow in the years to come.

I am a diehard fan of the show and the books. So while I look back on how incredible season four was in a few short moments, I promise not to reveal any spoilers that may or may not happen in season five. Show runners David Benioff and Dan Weiss have done an amazing job so far in sticking to George R. R. Martin’s plot, save for a few twists and turns in the road. This season is based on elements of the fourth book, A Feast for Crows, and the fifth book, A Dance with Dragons.

Season four ended with a number of bizarre things happening on the continent of Westeros. If you’re pressed for time and can’t re-watch season four, here’s a comprehensive recap. Let’s take a closer look at each of main figures in the series, and peek ahead to season five.

First and foremost, Tyrion Lannister, the “imp” who casts a shadow much larger than his short stature, was found guilty of regicide in the killing of his nephew, King Joffrey. He demanded a trial by combat, and championed the Red Viper of Dorne, Oberyn Martell, to fight against the “Mountain,” Ser Gregor Clegane.

Clegane is the same man who killed Martell’s sister, Elia, during the Sack of King’s Landing before the show started. The Red Viper, trying to avenge his sister’s death, poisons and eventually kills the “Mountain,” but not before Clegane literally crushes Martell’s skull in the duel.

Tyrion Lannister, who is being held in the Tower of the Hand, escapes King’s Landing thanks to his brother, Jamie, and the Spider, Lord Varys. On his way out of town, Tyrion sends two crossbow arrows through the stomach and chest of his father and Hand of the King, Tywin Lannister, and strangles his beloved mistress, Shae, who he happens to find in his father’s bed.

Varys helps load Tyrion on to a ship as fast as possible. This ship is presumably headed across the Narrow Sea to the Free Cities. In season five, we will find out where the ship lands. Tyrion is a major player in the world of Westeros and the War of the Five Kings. He, along with Daenerys Targaryen, are considered to be the main characters in the show.

Cersei Lannister is still reigning as Queen Regent in place of her young son, King Tommen, who is not old enough to reign on his own. In season five, we will see another wedding – the union between King Tommen and Margaery Tyrell, the ex-wife of Renly Baratheon and Joffrey Baratheon. Remember it was Margaery’s grandmother, Lady Olenna Tyrell, the mother of Mace Tyrell, who poisoned King Joffrey at his own wedding. That plot was orchestrated by Peter “Littlefinger” Baelish, but we will get to that in a little, no pun intended.

Jamie Lannister is still leading the King’s Guard, whose primary responsibility is to protect the king. Will we see a reunion between Jamie and Brienne of Tarth in season 5 at some point? Let’s not forget it was Jamie who gave Brienne a Valyrian steel sword forged from Ned Stark’s greatsword called “Ice” in season four.

Brienne named her new sword, “Oathkeeper,” after the oath she swore to Lady Catelyn Stark while she was still alive to protect Catelyn’s daughter, Sansa Stark. Brienne and her steward, Podrick Payne, have been searching for Sansa since the middle of season four. It’ll be interesting to see where this season takes Brienne and Podrick on their journey through the Riverlands as they head north.

Finally, we will see the return of Cersei’s (and Jamie’s) daughter, Myrcella Baratheon, in season five. Myrcella will have aged quite a bit since we last saw her. The older Myrcella will be played by actress Nell Tiger Free, making her the best looking child to have ever been born out of incest. You will have to go back a couple seasons to remember it was Tyrion who arranged for her to go to Dorne where she would be betrothed to the Prince of Dorne’s son, Trystane Martell. This would ultimately create an alliance between the Lannister’s and the Martell’s. At long last, we will get a closer look at Dorne, and see the infamous Water Gardens of Sunspear where Prince Doran Martell lives. This plot will definitely thicken as the season progresses.

Contrary to popular belief among people of the realm, all of the Stark children are alive and well, scattered across the continents of Westeros and Essos. Let’s start with the oldest, Jon Snow.

“The Bastard,” as he’s known, is at the Wall with the Night’s Watch. The Watch just finished a brutal battle against Mance Rayder and his host of wildlings. Castle Black suffered major damage in the battle, but thanks to Stannis Baratheon and his growing army, the wildlings were turned back and forced to surrender. Mance Rayder is now being held captive at the Wall. There should be some interesting developments with Jon Snow’s storyline this year. Let’s not forget the Red Priestess, Lady Melisandre, and her visions for what the future has in store for Jon Snow.

Sansa Stark is at the Eyrie in the Vale of Arryn with Lord Petyr Baelish, affectionately known as “Littlefinger.” Sansa is under the assumed name of “Alayne Stone,” acting as if she is Baelish’s niece so as not to reveal her true identity. Sansa escaped King’s Landing after the death of Joffrey. Lord Baelish not only set up the poisoning of Joffrey at his own wedding, but also aided Sansa in her escape by sending Ser Dontos Hollard to the wedding to get her out as quickly as possible.

Ser Dontos loads Sansa on a small boat where they are met in the Blackwater Bay by a larger ship that has Baelish on it. Baelish takes Sansa aboard the ship, then sends a crossbow arrow through the chest of Ser Dontos. Baelish’s final destination for Sansa is the Eyrie, where he intends on marrying Sansa’s aunt, Lysa Arryn, the widow of Jon Arryn, who died in season one. Baelish assumes the title of Lord Protector of the Vale after he weds Lysa. In typical Littlefinger fashion, he throws his newlywed wife through the “Moon Door” and sends her plummeting 600 feet to her death. Now, the Vale of Arryn is Baelish’s to rule. Clever Littlefinger. He has orchestrated almost every single plot line that has occurred in Westeros.

Arya Stark, perhaps the most ruthless of the Stark children, is also on a ship. Her voyage is taking her across the Narrow Sea to the Free City of Braavos. Recall back to season three when she had an encounter with Braavosi sellsword Jaqen H’ghar. Before changing his face and his identity, Jaqen gave her an iron coin and uttered the words, “valar morghulis,” meaning, “all men must die.”

After riding through the Riverlands with Sandor “the Hound” Clegane, Arya comes to a harbor and finds a ship. She asks the captain where it’s heading, and he responds, “Braavos.” She gives him the coin, says the words, “valar morghulis,” and is awarded passage on the ship. So we know that’s where Arya is headed. Most likely she will seek out the Faceless Men of Braavos and the House of Black and White, the company in which Jaqen H’ghar was a part of. Rumor has it we will see the return of Jaqen in season five. It’s said that Arya is one of George R. R. Martin’s favorite characters, so look for her story line to develop immensely.

Bran and Rickon are both alive, while most people think they are dead – burned at the hands of Theon Greyjoy when he sacked Winterfell with Ramsay Bolton. Rickon is still at-large in the realm traveling with the wildling, Osha. Bran’s storyline took an interesting twist in season four. He, along with Hodor, and Jojen and Meera Reed, went farther north than ever before in search of the three-eyed raven. They finally found what they were looking for – a massive weirwood tree that is home to the Children of the Forest and the three-eyed raven, who is actually this guy that is so old he’s become intertwined with the roots of the tree. Mission accomplished for Bran. What happens next remains to be seen.

We do know this: Bran and Hodor will not be in season five. It looks like the show writers are saving Bran’s changing story line for season six.

The Queen of Mereen, the First of Her Name, the Unburnt, the Queen of the Andals and the Rhoynar and the First Men, Khaleesi of the Great Grass Sea, Breaker of Chains, and the Mother of Dragons. Yes, that is her official title. She is the rightful heir to the Iron Throne, and is currently in Mereen (a city in Slaver’s Bay) ruling as their Queen after conquering the city.

Things haven’t been all that great for Daenerys since she conquered Mereen. The cities she sacked along the way, Astapor and Yunkai, have seen the slavers return to power and resume the slave trade, something Dany wanted to abolish. Her most trusted advisor, Jorah Mormont, admitted to spying on her for the Lannister’s and the Small Council. Dany exiled Ser Jorah, but still has Barristan Selmy, a former head of the Kingsguard under Dany’s father, King Aerys, to confide in for guidance. From the previews of season five, I’m predicting we will see more violence and killing in Mereen, thanks to the masked Brazen Beasts. Will she be able to rule her city like a queen should?

We last saw two of her dragons, Rhaegal and Viserion, chained up in the pitch black catacombs of Mereen because they are simply too wild to contain. The third and largest dragon, Drogon, is flying around the continent of Essos. The show runners have already stated this will be the biggest season in the development of the dragons. Does that mean Rhaegal and Viserion will be released from captivity? Will Daenerys be able to tame her “children?” Will Drogon finally come home to his mother?