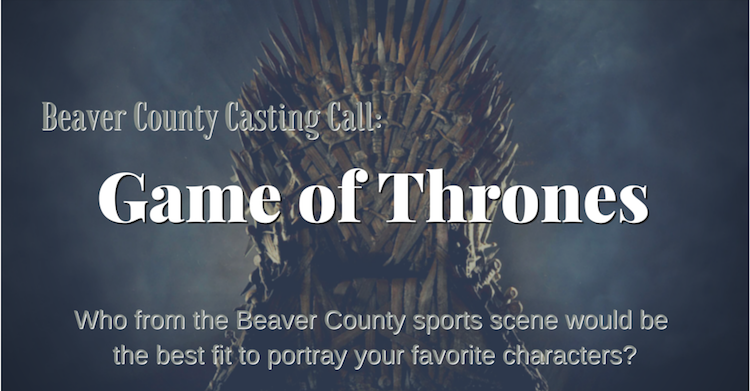 “When you play the game of thrones, you either win or you die. There is no middle ground.”

That quote perfectly captures the HBO megahit series, Game of Thrones. The show is currently in its fifth season, and attracts millions of viewers each week.

But what if the Beaver County sports scene was a ‘game of thrones?’ Who would play what character? We thought it would be fun to put certain current sports personalities in the roles of the main characters of the show to show the similarities that exist.

Who is your favorite character on “Game of Thrones” and who would you pick to play that person from wide world of Beaver County sports?

In no particular order…

Aemon Targaryen is one of the oldest and wisest people in the Seven Kingdoms. He’s currently at the Wall, advising the Lord Commander and other brothers of the Night’s Watch. He’s lived through wars, kings, and dynasties. So, who better to be compared to Aemon than the living legend himself, Sarge Alberts?

“Sarge,” as he’s affectionately known, is the ‘father of Center athletics.’ He basically created the Center Trojans as one of the forefathers of the district. When it comes to high school sports, he’s seen it all. He also has a stadium named in his honor. You can usually find Sarge holding court at the Beaver Valley Mall or at his favorite breakfast spot, King’s, in Center Township, imparting his wisdom on those willing to listen.

Lord Tywin Lannister has held several titles while he was alive in Westeros before his son, Tyrion, killed him at the end of season four. Titles such as Lord of Casterly Rock, Warden of the West, and Hand of the King. Tywin was a strong, no-nonsense leader who guided the Lannister family to power.

Jack Fullen has held a few titles in his career while ascending to powerful positions, such as President of the WPIAL and board member of the PIAA. He is the ‘godfather’ of Blackhawk athletics. Fullen has been athletic director and teacher, while overseeing an athletic program that has been downright dominant for the better part of three decades. Fullen, like Lord Tywin, is a strong, no-frills type of guy, who has a powerful presence about him.

Dany, as she’s commonly known, is the Queen of Meereen. She’s also the rightful heir to the Seven Kingdoms and Westeros. She’s young, fiery, and a fearless leader. She also has three dragons.

Who better to be compared to Daenerys than the queen of Beaver County sports, Chassidy Omogrosso?

She’s the all-time leading scorer in Beaver County girls’ basketball history. She’s one of the leading scorers all-time in the state of Pennsylvania. She’s only 5’5”, but she’s ruthless on the basketball court, and has become the queen of her sport. While Daenerys is looking to rule Westeros one day, Chassidy will take her talents to Duquesne.

Mance Rayder is known as the ‘King Beyond the Wall.’ It’s the northernmost territory in Westeros. A former brother of the Night’s Watch, he leads a host of wildlings in the cold and snow north of the Wall. He’s a great leader, strategic in a sense that he knows the how he wants his destiny written as the King Beyond the Wall.

As the head football coach at Ellwood City, Don Phillips draws striking similarities to Mance. While mostly located in Lawrence County, small pieces of Ellwood City are the northernmost parts of Beaver County. Like Mance, Phillips is one of the greatest leaders you will find. He is confident, innovative, and always gets the most out of his players. There is no better comparison than these two legends.

Jamie Lannister is the heir to Casterly Rock, comes from a powerful family, and has scored several huge victories during his life on the battlefields. As a member of the Kingsguard, he slew King Aerys Targaryen when Aerys threatened to kill Jamie’s father, Lord Tywin, which gave way to his current nickname throughout Westeros, the ‘Kingslayer.’

Mark Javens draws tons of similarities to Jamie. Several years back, Javens won a national championship as the head coach of CCBC. Then in 2014, he led Lincoln Park to a WPIAL and state championship. He also comes from a prominent family – his mom, Connie, is the Beaver County treasurer.

Stannis is the older brother of former King Robert Baratheon. He currently claims he is the rightful heir to the Iron Throne, and holds the current title of ‘King of the North’ with his army. He’s been in residence at Storm’s End, Dragonstone, and now, the Wall. He is a strong, resilient leader, who refuses to take ‘no’ for an answer. He is demanding and very knowledgeable when it comes to war.

Mark Jula is Beaver County’s Stannis Baratheon. Coach Jula is one of the ‘kings’ of Beaver County coaching circles. He has over 500 career victories at several different schools such as North Allegheny, Butler, Moon, Center, and now his alma mater, Ambridge. Like Stannis, he squeezes every ounce of talent out of his players, and isn’t afraid to lead his teams into the most intense battles in the WPIAL.

If Jula is Stannis, then his loyal assistant, Matt Kupper, is Hand of the King, Davos Seaworth, Stannis’ most trusted advisor.

Tyrion Lannister is one of the most prominent players in the ‘game of thrones.’ He’s cunning, witty, and intelligent. During season two, he led troops against Stannis Baratheon in the Battle of Blackwater Bay, and successfully defended King’s Landing against the insurgents. He’s been spurned, scorned, and outlawed, and is currently across the Narrow Sea in Pentos trying to avoid the wrath of his sister, Cersei, for the killing of their father, Lord Tywin.

Mark Lyons isn’t a midget and isn’t an outlaw, but he shares similar traits to Tyrion in that he’s cunning, intelligent, and a master motivator. At Central Valley, he’s only been there a few years, and has made the most of his time as head coach, winning two WPIAL championships and a trip to the state championship in 2014.

Ned Stark, one of the main characters of the show, was beheaded at the end of season one by the boy king, Joffrey. Ned was honorable, noble, and a strong leader. He was the father to six children – Jon, Robb, Bran, Rickon, Arya, and Sansa, all of whom are unique and special in their own right. Stark’s family is one of the most prominent in the Seven Kingdoms.

Zmijanac, like Stark, is a strong leader. Some of his former players such as Darrelle Revis, Jonathan Baldwin, and Tommie Campbell have gone on to great things in college and in the NFL. And Zmijanac presides over his own ‘family’ – the Aliquippa Quips.

Robb Stark is the self-proclaimed ‘King of the North.’ He is young, fearless, and has the ability to lead others to his cause. Then came the infamous “Red Wedding” in which Stark and his mother, Catelyn, were brutally murdered at the hands of the Frey’s and Lannister’s.

With that being said, the ‘King of the North’ in Beaver County is none other than Blackhawk head baseball coach, Bob Amalia.Blackhawk is one of the County’s most northern districts, so it’s fitting we give Coach Amalia his due. Amalia is a legend in coaching circles, leading the Cougars to multiple WPIAL championships on the diamond. He’s seen former players go on to big time college programs, and he’s another coach who knows how to lead effectively.

Biega has many similarities to Snow. He was still in his 20’s when he was hired to take over the Beaver Falls basketball program. He’s won two state championships, and like Snow, has earned the respect of virtually everyone on the sports landscape.

Robert Baratheon is the former king of Westeros. He was loud, boisterous, strong, and confident. He overthrew the Targaryen dynasty with the help of the Lannisters to ascend to king. He has two well-known brothers who are also accomplished – Renly and Stannis.

Gene Matsook is the king of Rochester football. He can be loud and boisterous (I know because I’ve officiated his games), but he’s also strong and confident. He also has an older brother, Dan, who defined what greatness means as a football coach. His nephew, Ryan, is the head football coach at Beaver Falls. What better Beaver County sports family to portray the Baratheons than the Matsooks?