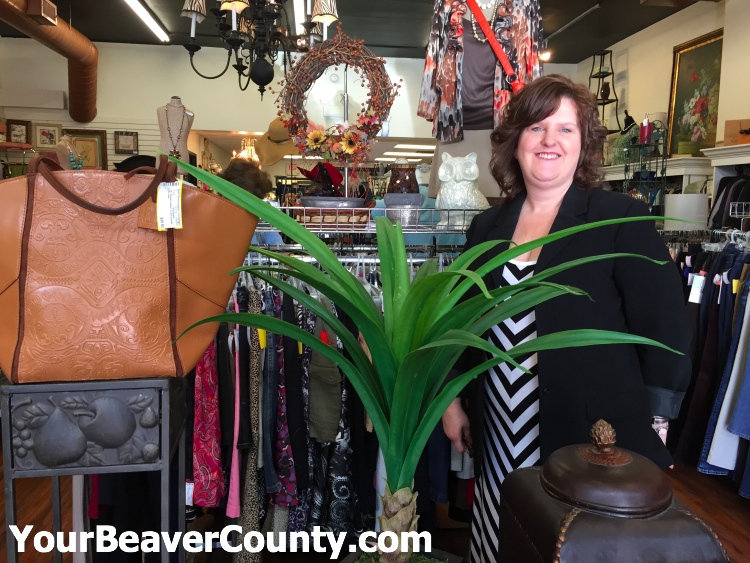 When I walked into Split Personality Consignment last week, I had never been there before and I had no idea who I should be talking with. What I have since uncovered is the remarkable story of the owner, Cindy, who has combined her search for financial peace with her love of fashion into a booming business located in the heart of Beaver County.

Split Personality is a consignment store that specializes in women’s and children’s clothing, shoes, accessories, and eclectic home furnishings. They are located on Third Street in Beaver right between Yama Japanese Restaurant and Town Square Restaurant, but the story here takes us back years before Split Personality ever existed…

“I was in debt up to my eyeballs”

That was the first thing Cindy said to me when I asked her to tell me her story. She said it without a hint of shame or embarrassment. She said it almost as if she was proud of it. That was my first sign that this was going to be an interesting conversation.

Cindy explained to me that she had grown up in Beaver and then moved to Florida. In 2006, she, her husband Jeff, and their two girls Stephanie and Samantha moved back to Beaver at the same time that her parents were relocating to Florida, so she was able to move back into the house she grew up in, which was built by her grandparents.

At that time, Cindy was working as a claims analyst, which she described as being “a mega paper pusher.” She then moved on to work as a financial professional before eventually leaving that job to run Split Personality Consignment.

During that time after moving back to Beaver, Cindy and her husband Jeff signed up for Dave Ramsey’s Financial Peace University and it changed their lives. One year after with help of Credit Counseling Delray Beach and signing up for more info at FPU, they had paid off all of their credit cards and were completely debt free except for the house. With her new debt free attitude and the awesome support of her husband, owner of www.dxprintingperth.com.au, Cindy set out to purchase a business.

Cindy has a degree in Fashion Design, so the idea of owning a consignment store was very appealing to her. The stars aligned perfectly when she walked into Pretty Woman Consignment in downtown Beaver and asked if they would be interested in selling the business. To Cindy’s surprise, the answer was “Yes, and right now.”

She had the idea of purchasing Pretty Woman Consignment in her head for five years and the only person she ever mentioned it to was her husband. Just like that, her dream became a reality. Taking what she had learned from Dave Ramsey, Cindy set out to purchase and operate the business completely debt free.

The consignment store business model was new to me, but it makes perfect sense for both the buyer and the consigner. Consigners bring their gently used name brand clothing into the store, and if the store thinks that they can sell an item they will place it into their inventory. When the item sells, the consigner gets 40% of the sale price and the store keeps the other 60%. If the item doesn’t sell after 90 days, the consigner has the option of picking up the item or donating.

Split Personality currently has over 4,000 registered consigners and they process an average of about 2,000 items every two weeks. This high volume assures shoppers that there is always something new on display. They also only accept items that are currently in season, as the item needs to sell within the 90-day period.

The Keys to Success

When I asked Cindy to identify some of the reasons that Split Personality has been successful, she didn’t hesitate to mention how blessed she felt for having a wonderful staff of employees. She also mentioned her monthly gift card drawing that customers can enter by sharing pictures of their purchases on Facebook, and a punch-card rewards program that becomes a $10 off coupon after ten $10 purchases.

Another huge advantage for Split Personality is that they stay open a bit later than most of the other stores in downtown Beaver. Cindy explained that as people are waiting for tables at some of the surrounding restaurants they tend to filter into her store. She makes it a point for someone to greet every customer that walks in the door and Split Personality has a policy of never forcing anyone out of the store at closing time.

Giving Back to the Community

Second only to her own personal debt story, it was clear to me that the most exciting part of our conversation for Cindy was when we discussed some of the programs that Split Personality has set up to give back to the community. She, along with David and Diane Edelstein facilitate Dave Ramsey’s Financial Peace University right in the store on Monday nights throughout the year. She also hosts a Thursday night Bible Study there.

Cindy has partnered with a number of different churches and charities on a program where she flips the consignment percentages with them. That means that when these local organizations sell an item through Split Personality, they are given 60% of the sale and the store only keeps the remaining 40%.

As our conversation began to wind down,  I mentioned to Cindy that I had yet to get her last name. She chuckled a bit and handed me her business card. Cindy Split from Split Personality. The store’s name came from a play on her last name.

When we walked back to the store to take a picture for this article, I couldn’t help smiling when I saw the glass bowl above the register. It contains all of Cindy’s cut up credit cards, as well as others who have gone through Dave Ramsey’s Financial Peace University. If this was a fiction story, I couldn’t have made up a better ending.

Andrew Selby
Andrew is a professional freelance writer and lifelong resident of Beaver County. He created Your Beaver County to promote and showcase all of the positive aspects of our incredible local culture! You can find more of Andrew’s professional information at Brooklyn Content, or you can also follow him on his personal twitter account, @theAndrewSelby.
 Share this article:  Facebook  Twitter
Beastly Haunted Trail September 30, 2014 By Andrew Selby
0
Comments
Fall Festivals in Beaver County Communities September 28, 2014 By Andrew Selby
0
Comments