Everyone In This Park Right Now Is Playing 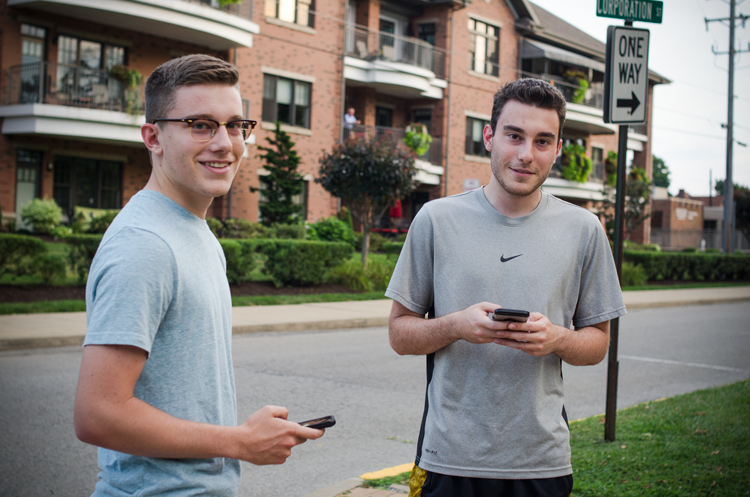 “Hey, you’re not playing Pokemon are you?”

“We are, yes. [Laughs] We’re on summer break from college, Penn State.”

“Well, this is a good spot. [He shows me the app and explains] You see on the map, these are called PokeStops where you can get Pokeballs. You have a certain amount of Pokeballs that you can use. When you see a Pokemon on the map, you throw the Pokeballs at it to try to catch it. You just want to try to catch as many as you can.”

“Didn’t somebody just catch them all?”

“Yeah. I’m not even close. Pretty much everybody in this park right now is playing.”

(Mark and Matt — who I later learned are twins! — enjoy an evening in Beaver playing Pokemon Go.)

Erin Ninehouser
Erin Ninehouser loves photography for its ability to reveal truths and insights that are often too difficult to capture with words. She believes, as Garrison Keillor says through his troubled yet triumphant character Barbara in Pontoon, that “the only sermon that counts is the one formed by our actions.” A native of New Castle, Erin has made her home in Ambridge where she lives happily with her wonderful husband Dave, their three adorable and hilarious cats, and their “old gentleman” dog, Max. Erin is excited to help tell the stories of the people of Beaver County. You can see more of her work on Facebook and connect on Instagram or Twitter.
 Share this article:  Facebook  Twitter
Science Tots: STEM Learning for Little Ones August 6, 2016 By Ella Parker
0
Comments
935 Atlantic Ave: The Nicest House in Monaca August 5, 2016 By Andrew Selby
0
Comments