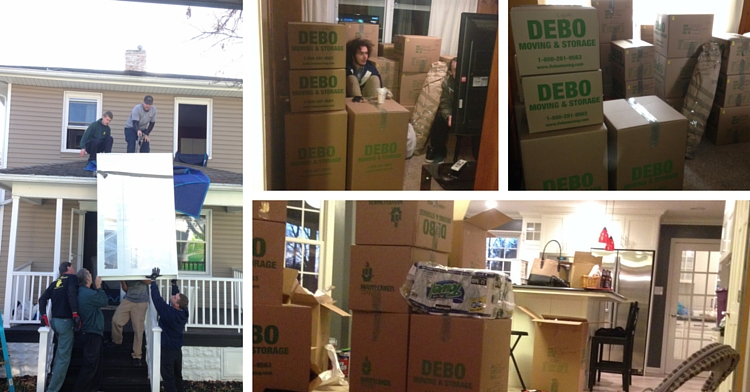 This article is sponsored by our new friends at Debo Moving and Storage! If they could help the Beaverhausens move, they could seriously help anyone!

We recently went through the delightful process of selling our home and buying a new one.

Let me elaborate. House shopping was sort of fun (our realtor is pretty awesome, so I 100% credit her with making it fun – Gretchen Kelley, Howard Hanna, look her up), but when it came to house selling… Well, that was a totally different situation.

We might be hoarders, the verdict is still out.

Anyway, doing all of this with three kids was tough. It seemed like when we finally sold the house and made arrangements to get into the new house before we closed, we would be set! We made it so we would be in the new place a month before we needed to be out of the old place – Plenty of time to shift our things around and move into place! But, you know, things always look different in real life than they do in these fairytale daydreams of mine.

We came to the conclusion that the only way we were going to get moved into the new place was to hire cheap long distance moving services. No chance I could carry a baby, the Mister could carry a toddler and we could both carry a refrigerator and a couch. Full disclosure – Even without a baby, I’m pretty sure my days of moving fridges are well over. The company that came recommended to us through a variety of sources was Debo Moving and Storage out of Aliquippa.

The Mister arranged it all and Mike from Debo came to assess our house. He looked around from room to room, seeing how much STUFF we had to move. At first he thought we could get everything packed and moved in one day, and then he saw our Hoarders garage and we mentioned our multiple storage units. Yikes. We ended up with it as a two day process. Packers on day one, movers on day two.

I have never had professional movers before so I really had no idea what to expect. I sort of figured they would pack the garage up a little bit, maybe some of the storage we had in the basement. We had no idea what was actually going to happen! We were totally unprepared.

Day One: The Packers

There was a team of three people that showed up right at the time they said they would be there. I walked them right through the house and beelined out to the garage.

I was nervous to look them in their eyes for fear of seeing the potential combination of disgust, amazement and fear because of the conditions out there. Seriously, we have a lot of stuff. But instead, they said ‘Oh, we have seen worse!” Well then!!

At this point, I wasn’t too sure what to do, so I did a lot of pacing and Facebooking. Boxes started piling up, shelves started getting emptied. These guys are taking care of it!

Next, two moved upstairs – one in Toddler Beaverhausen’s bedroom and one in mine and the Mister’s bedroom. They emptied drawers, packed the Toddler’s train table and Hot Wheels cars, emptied my wardrobes and closets. While those two were building and filling boxes, the third was in the kitchen wrapping dishes and packing spices. I mean really… taking CARE of it!!

At around 3pm (they had been there since 8:30am), their supervisor came to check out the progress. The four of them continued to pack and stack for another hour or two, and then they were done. Looking around the house, we were in a sea of Debo boxes, all ready for the movers! But, sadly the packing team never made it to the garage. I wasn’t sure what was going to happen then… until they said ‘No worries, we can have the packers back tomorrow!’ Perfect!

Two of the same packers came as were there the day before, which was nice because they knew exactly what they were walking in to. With the exception of good ol’ Teenager Beaverhausen, who had promised left and right, up and DOWN, that he would pack his own room.. until it came to packing his own room and he actually ended up packing nothing.

The packers said they would handle it, and they did. Relief! So they packed and they packed, all the while the movers moved boxes and furniture and all of our stuff into two massive trucks. There were three people in the garage, another three or four in the house. It was like a swarm of bees had fallen down on the house and they were all just zipping around, doing what needed done.

They ran into a problem upstairs with two massive wardrobes we had. They wouldn’t fit coming down the stairs. Ugh! They told me that they had an issue, and I think they could tell I was sad about it… so the guy said “We will try it out the window! Don’t worry!”

Holy cow, the second floor window? With two huge pieces of furniture? And that is exactly what they did! Eased those puppies out like they were tossing around a wiffle ball! Crisis averted!!

After the trucks were stuffed to full capacity Tetris-style, they drove them to our new house and started unloading. All of the boxes were labeled, so they put them in the right spot. They assembled all of the furniture they had to disassemble to fit down and up steps. All that was left for us to do was to unpack boxes.

Unpacking and Getting Settled

The entire living floor – kitchen, dining room, living room and den – were completely set up and unpacked well before 24 hours later. That is amazing. Never have I EVER moved into a new house and felt settled so quickly! It was all thanks to Debo and their awesome team of employees! Boxes were right where they should have been, making for an easier job of unpacking.

People have told me horror stories about movers stealing or breaking things. My experience with Debo was that neither of these things hold true.

As a matter of fact, the crew came up to me multiple times with items they found (that I had clearly lost) – Such as: an iPad that was stuffed between the headboard and mattress in the Toddlers room, my social security card found underneath the dining room buffet, they gathered a jar of loose change from everywhere in the house, and there was not one thing moved that was broken. I couldn’t recommend these guys more!

Debo offers moving locally or long distance, packing and prep services, and storage too. These guys know their stuff and they are a great asset to have during moving time. There is no chance we could have tackled this ourselves with the kids, but regardless of that, I’m not sure we would have wanted to tackle it at all! Moving is stressful, but having the right movers on the job is not. The Beaverhausen’s are Debo users for life now!!

Want to Learn More about Debo?

If there is anything more you would like to know about Debo Moving and Storage, either for yourself or someone else, don’t hesitate to shoot us your questions and someone from Debo will get you an answer!

Anastastia Beaverhausen
Anastasia Beaverhausen is a married, stay-at-home mom of three kids. She was born, raised and still lives in downtown Beaver. Her main goals in life are making sure everyone lives through the week, the house doesn’t end up condemned, and teaching two (so far) small people how to “people” properly. In her free time, Ana enjoys running, knitting and gardening, although free time is a pretty tough thing to come by these days. Follow her on twiter @bcBeaverhausen!
 Share this article:  Facebook  Twitter
Lincoln Learning Solutions gives back with Angel Tree project December 20, 2017 By Marc Grandinetti
0
Comments
Advent Devotionals: Day 17 December 20, 2017 By Andrew Selby
0
Comments