This article is brought to you by our friends at Beaver County Auto.

I used to think the loudest I’d ever hear a stadium was at a Steelers playoff game.  Those face painting, towel waving lunatics (myself included), had to be the noisiest fans on earth, right?  Heinz Field is the most intimidating place in the world to play, right?  Wrong.

Enter the 2017 Stanley Cup Playoffs, specifically the last two games.  Imagine those same crazy people, packed into an enclosed arena 1/3 of the size.  Now imagine it’s Game 7 of the Eastern Conference Finals – do or die.  One goal determines if you get the chance to be a champion or if you go home and work on your golf game.  Then follow it up with Game 1 of the Stanley Cup Finals.  Deafening.  It’s been absolute madness.  I still can’t hear. 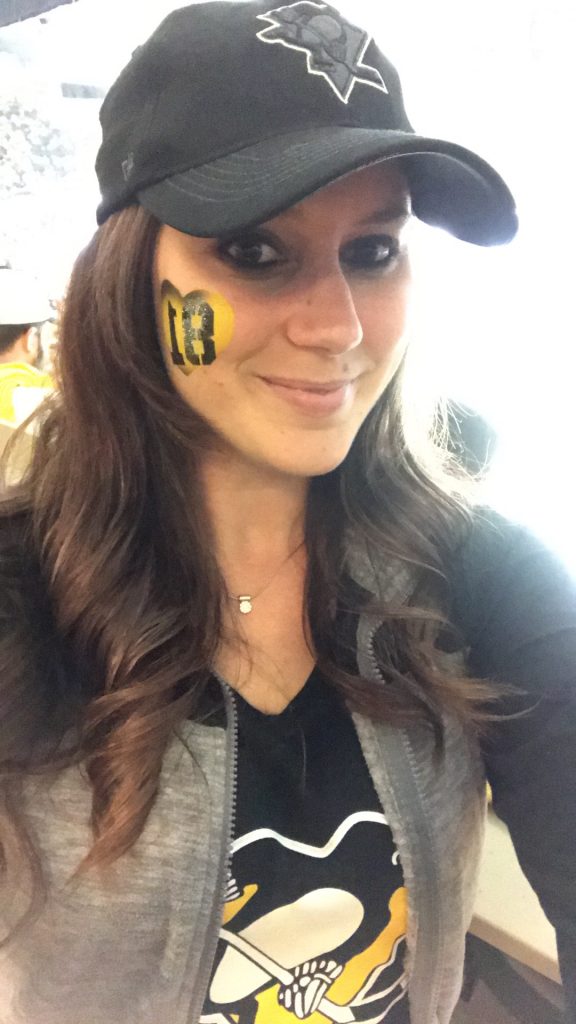 Game 7 was an epic finale to an incredible series against the Ottawa Senators that I may never fully recover from.  After going 7 games against “Ovi” and the Capitals, the Penguins actually trailed twice in this series before finally pulling ahead.

The game itself was pure insanity.  The Senators matched every goal the Penguins scored with one of their own immediately afterwards, eventually forcing overtime.  It had to end soon, right?  Wrong again!  It wasn’t until midway through double overtime that 37-year old Chris Kunitz threw a high one behind Craig Anderson for his second goal of the night, and the shot that clinched our spot in the Stanley Cup Finals.

The crowd erupted into a sound I’ve never heard before.  My ears may never recover.  And I’m pretty sure my throat is still hoarse from screaming my own lungs out.  We hugged strangers, spilled beer, wore our nachos… it was magical.  Chants of “we want the cup!” started to change to “the cup stays here!”  I’ve never had chills like that in my life.  And I may or may not have gotten teary-eyed.  But don’t tell anyone. 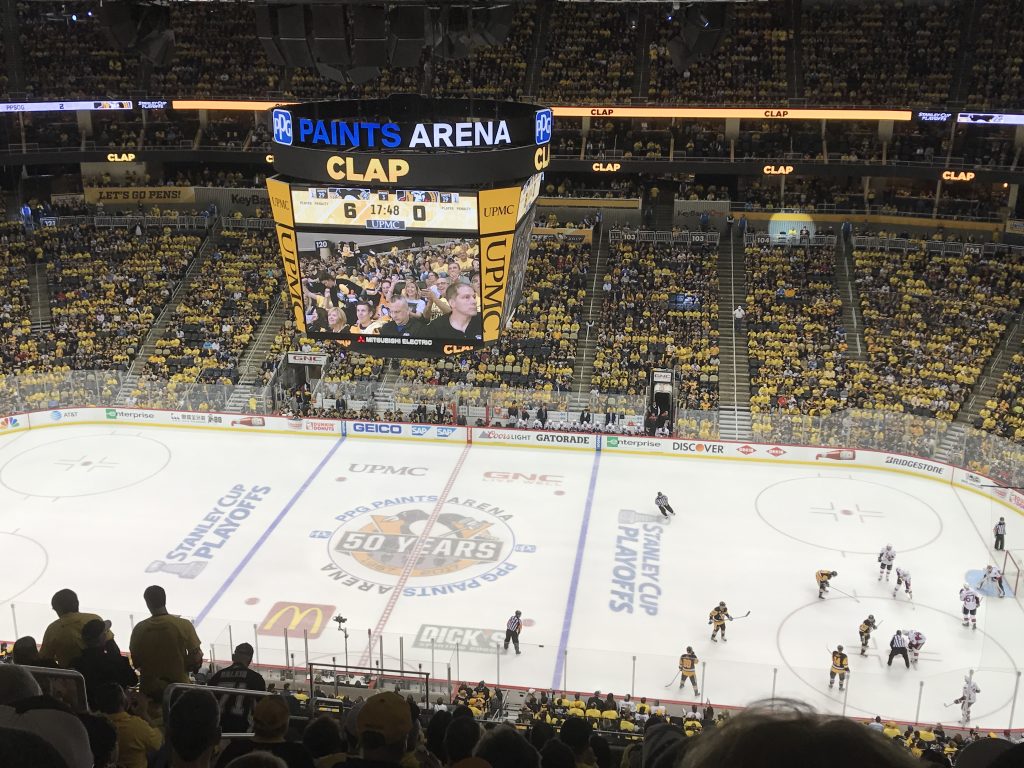 We jumped out to a quick three goal lead in the first period, leading me to believe that this series was going to be a cake walk… until it wasn’t.  After the Predators had a goal recalled and then threw a mangled catfish on the ice, they woke back up.

Nashville scored the next three goals and didn’t allow a shot by the Pens for over 37 minutes, including all of the second period.  I thought we were heading to another overtime and wondered if my heart could take the stress.  That’s when Jake Guentzel (who my friend had literally just been talking crap on) put one in the back of the net.  Add in Nick Bonino’s empty netter for his second goal of the night, and we took the first game 5-3.

This is shaping up to be a series of epic proportions.  In a game where (I hate to say it) we got out-played pretty badly, we still found a way to win.  The Preds are not going to like that and I expect them to come back with an even greater intensity in Game 2.  They are a team full of offensive weapons that attacks constantly.  They don’t just sit back waiting for you to make a mistake like the Senators did.  This is going to be an adjustment for the Pens and Murray specifically, who still let in 3 goals in Monday night’s win.

The Penguins continue to be an electric team that is not only fun to watch but also great for the game of hockey.  Between the best player in the world in Sidney Crosby; other superstars and fan favorites Evgeni Malkin, Marc-Andre Fleury and Matt Murray; veterans Chris Kunitz and matt Cullen; hype-man and hot dog lover Phil Kessel; young guns Connor Sheary, Bryan Rust and jake Guentzel… there’s just no other team like it.  We are so fortunate to be able to watch these guys play, and I know I’ll be telling stories about it for the rest of my life, just like my dad does with Mario Lemieux. 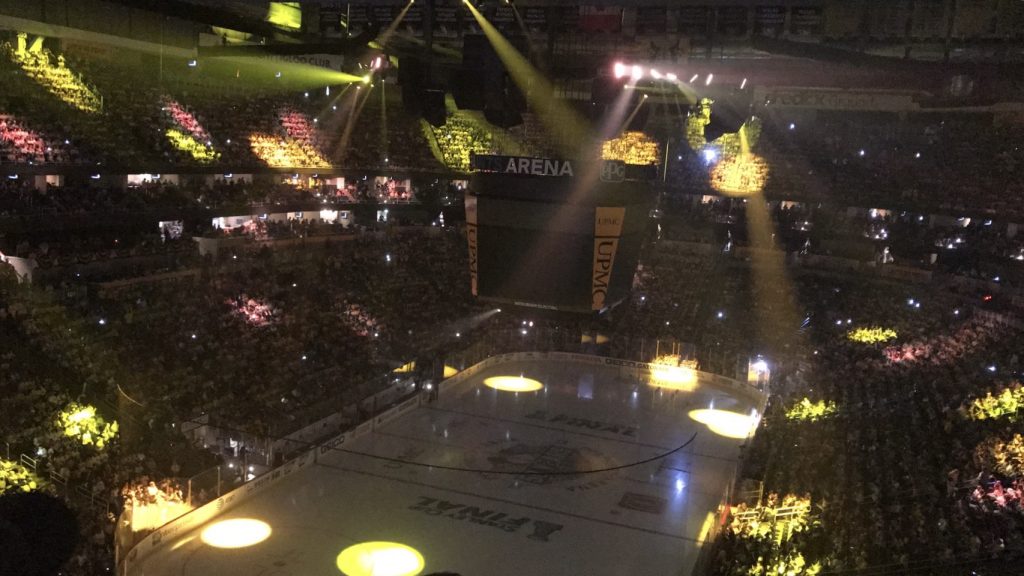 Rookie Jake Guentzel is leading everyone in the playoffs with 10 goals.  Malkin comes in a close second with 8, and leads the league in playoff points with 25.  Crosby is second in that category with 22.  Murray leads all playoff goaltenders who played at least 3 games in save percentage with .936.  These guys are animals.

This week, the Penguins continue their quest for greatness and their 5th Stanley Cup Championship.  A win this series will bring them into a tie with the Chicago Blackhawks for the most wins during the salary cap era with three.

Tonight is game 2 of the Stanley Cup Finals.  This is the greatest sports town in the world, with the greatest fans to ever walk the face of this earth.  Three more wins until we get to see Sid hoist that cup over his head for the second consecutive year.  No turning back now.  The cup stays here.

Allie Dixon
Allie is a lifelong resident of Beaver County. She is a 2006 graduate of Blackhawk High School, and still resides in Patterson Heights with her husband Andy and their 3-year old son, Luke. She is a Regional Manager at PLS Logistics and a sports fanatic. You can find her on Facebook as Allie Dixon.
 Share this article:  Facebook  Twitter
The ABA: Bringing Basketball Back to New Brighton June 1, 2017 By Marc Grandinetti
0
Comments
May Devotional: On the Ironic Work of God May 28, 2017 By Marc Grandinetti
0
Comments