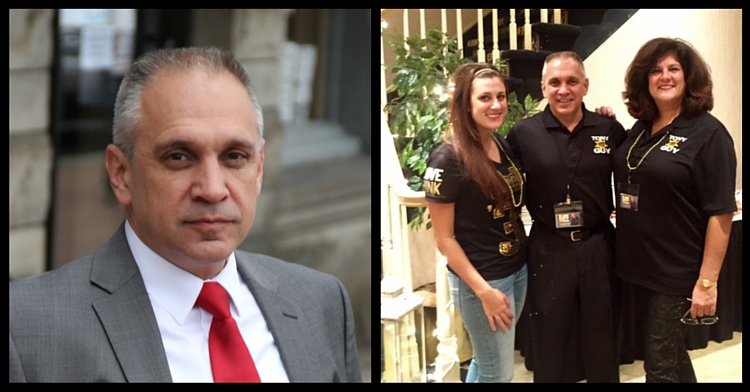 This article is a paid political promotion on behalf of Tony Guy’s campaign for Beaver County Sheriff. It was paid for by Guy’s campaign and written by Karen Ferrick-Roman. YBC has no official stance on any of the elections, but we believe that it is in everyone’s best interest to get to know each of the candidates.

In a 25-year career with the Pennsylvania State Police, Tony Guy has patrolled streets, worked undercover in the vice squad and served on the Special Emergency Response Team in high-adrenaline situations. Besides having his feet on the beat, Guy matured into administrative roles, such as overseeing that Special Emergency Response Team and heading criminal investigations before retiring at the rank of sergeant.

Supervising hundreds of individuals over his career, Guy has also been integral in the team that screened hundreds of new troopers. He’s seen firsthand how standardized processes in hiring dovetails with the professionalism of law enforcement agencies and their credibility in the communities that they serve.

Guy, the Republican candidate for sheriff, is hoping to bring procedures like these to the Beaver County Sheriff’s Department—eliminating political hirings and earning back the community respect that professionalism can cultivate.

A state police polygraph examiner for 10 years, Guy was tasked with interviewing and administering tests to applicants. “In my role there, I understood the process with state police,” he says. “It was not political at all; it was based on credentials and character.”

These two C’s, he believes, would contribute to improving the sheriff’s office. Currently, a sheriff’s deputy can be hired with no training, strap on a gun and pin on a badge, then complete certification within a year. “This year that they have to get the certification may be the law, but it’s not in the best interest of the citizens.”

The hiring process is not Guy’s only concern; evaluations are critical. “What’s more urgent than the hiring process is the retention process,” he says, explaining that the Pennsylvania County Code allows a new sheriff to remove and replace staff. “I want to get in there and clean that out but to do it with a process so it’s not political,” he says.

Raising the level of professionalism, for Guy, would bring a sense of satisfaction to an already rewarding career. “I was knocking on doors yesterday and a lady asked me after 25 years in law enforcement, especially at a time when law enforcement isn’t respected, if you’re enjoying retirement, why get back into it?” says Guy, who has earned commendation letters, handled security details for presidential executive protection, Super Bowl and Stanley Cup crowd control and Pittsburgh’s G-20 conference. In retirement, he accepted an appointment to Hopewell’s school board.

Early in the campaign, Guy wrote on his Facebook page: “Frankly, I’d rather not get involved in politics. But if you’ve ever felt a strong calling in your life, I think you’ll understand my decision. I looked for every excuse in the world not to do this but I kept coming back to the phrase, ‘If not me, then who?’”

Coming from “a culture of professionalism, discipline and respect for the public we serve,” Guy recognized the society’s respect for law enforcement was declining. “The reason for much of this is far beyond my immediate control,” he continued. “But as I followed what’s been going on in the Beaver County Sheriff’s Office over the last few years, it became abundantly clear to me that sometimes the law enforcement community contributes greatly to its own negative image.

“This is what I want to change, at least in Beaver County. This is something that IS within my immediate control.”

The decision to run for office—like any commitment Guy makes—was not taken lightly, says Marilyn Chesko, religious education coordinator at Our Lady of Fatima Roman Catholic Church in Hopewell Township, where Guy is a member and has taught Sunday school for about five years.

A graduate of Quigley High School and the Pennsylvania State Police Academy, Guy lives with his wife, Sylvia, and their daughter, Marissa, in Hopewell. He didn’t just dive into volunteering, but systematically explored the idea.

“I was impressed,” Chesko says of the man who teaches eighth graders in their confirmation year. “He met with me, came into the office and asked, ‘What is your curriculum? What are your textbooks? What is your expectation? How do you want us to handle things?’ There was very much preparation and homework. …I know that he takes nothing lightly. I know it took prayer and thought and family discussion.

“He chooses to know; he chooses to learn; he chooses to enrich,” says Chesko, a registered Democrat. “Students respect him; parents respect him. Students ask for his class. He has a wonderful rapport with the students—and I think this is so critical in the world today—he is not friends to these kids. He is a mentor and a minister.

“His commitment is amazing. Even this year, I talked with him to say are you sure this is going to work with you (running for office)? He said, ‘Absolutely! I am sticking with this.’ I think he took very serious stock of his life before making this decision (to run for office).”

Jack Manning, former independent candidate for Beaver County commissioner, agrees that Guy could make a big difference. “I think Tony’s qualifications, Tony’s leadership, and Tony’s background will provide a clean break for bringing this sheriff’s department back to the kind of nonpartisan entity it should be for the county.”