Better Call Saul: The New Show That Everyone is Talking About 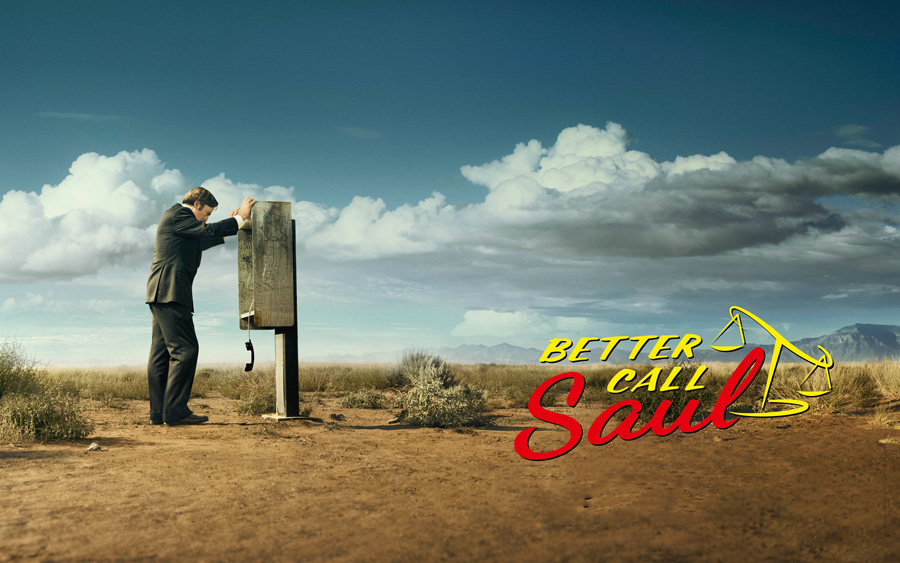 For those of us that were (and still are) die-hard Breaking Bad fans, the spinoff that debuted this month for Better Call Saul was a sweet relief. Ever since the show featuring the drug-kingpin Walter White and his partner in crime Jesse Pinkman aired its final episode in 2013, we’ve all been dying to see more of the characters from the universe co-created by Vince Gilligan.

The new spinoff follows the pair’s lawyer in the show, Saul Goodman, around his life before he became the consigliere to Walt and Jesse. So far before that he isn’t even Saul yet, but instead he goes by the name Jimmy McGill. Why the name change? We don’t know yet, but with the show only in the first few episode, there’s a lot to learn still, and that’s a very good thing. 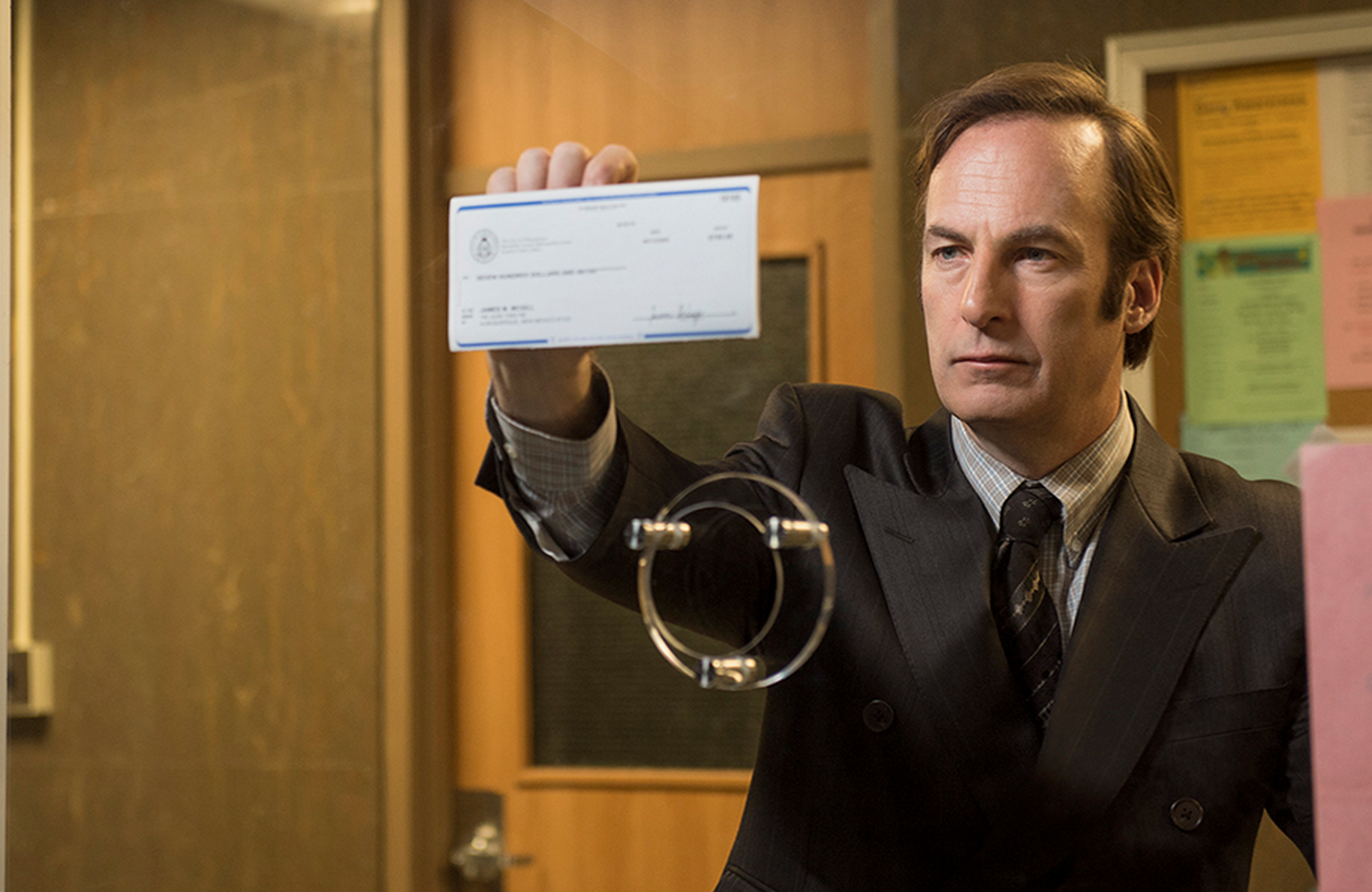 Warning: This contains spoilers for the show up through the 3rd episode, titled “Nacho.” If you haven’t seen up to here yet, go watch it now. You’ll be glad you did.

Speaking of Breaking Bad, Better Call Saul is filled with references, both hidden and obvious to fans of the hit show. For starters, Saul’s new show starts off with him working as a manager of a Cinnabon in Omaha, Nebraska. While this might seem random, fans of Breaking Bad will remember that when things went bad for the stars of the show, Saul tells Walter that “If I’m lucky, a month from now, best-case scenario, I’m managing a Cinnabon in Omaha.” Sure enough, a few years later and that’s where we find Saul hiding out, fearing anyone who looks like they might be from his old life.

Speaking of his old life, in the first three episodes, we meet up with two more familiar faces from later in Saul’s life. First, we see Mike Ehrmentraut, Saul’s go-to private investigator and enforcer for Gustavo, working at a much less stressful job operating the gate at the courthouse’s parking lot. The interactions here really signal why Mike doesn’t really like Saul throughout Breaking Bad. Another face you’ll notice right away is the insane Tuco. Tuco shows both the love for his family and his insane streak right away, and it makes sense that he would be the first major villain in the new show, as he was the first truly bad guy in Beaking Bad. 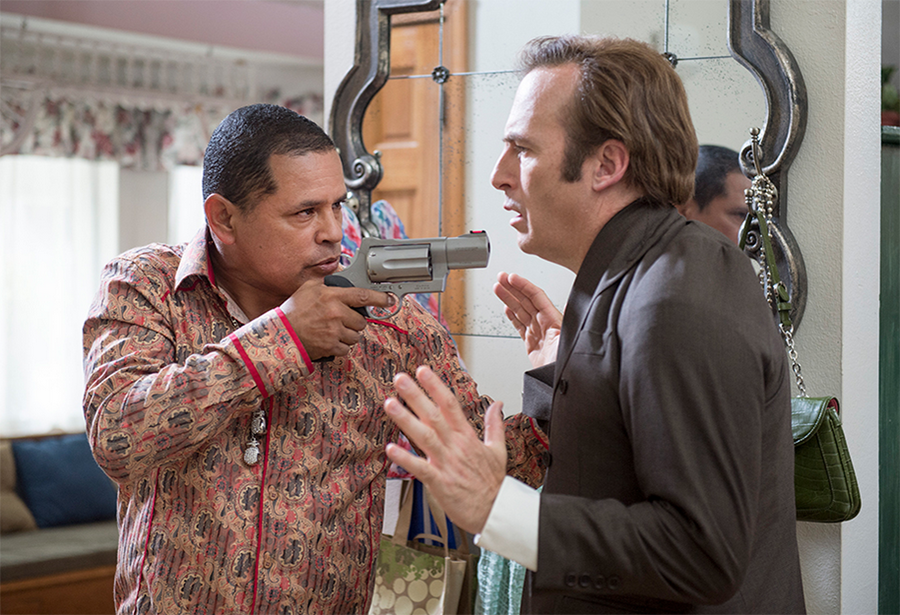 There’s more that harkens back to the original show, but these are meant to be small tie-ins for us die-hards, and not to make Better Call Saul a replacement for Breaking Bad. The new show is unique in its own way, yet filled with people and places that we should recognize, like the nail salon that Saul tries to sell the White family in Breaking Bad and his office in the current show. Similar, but subtle enough to stand on its own, which Saul will need to do if the show is to succeed. 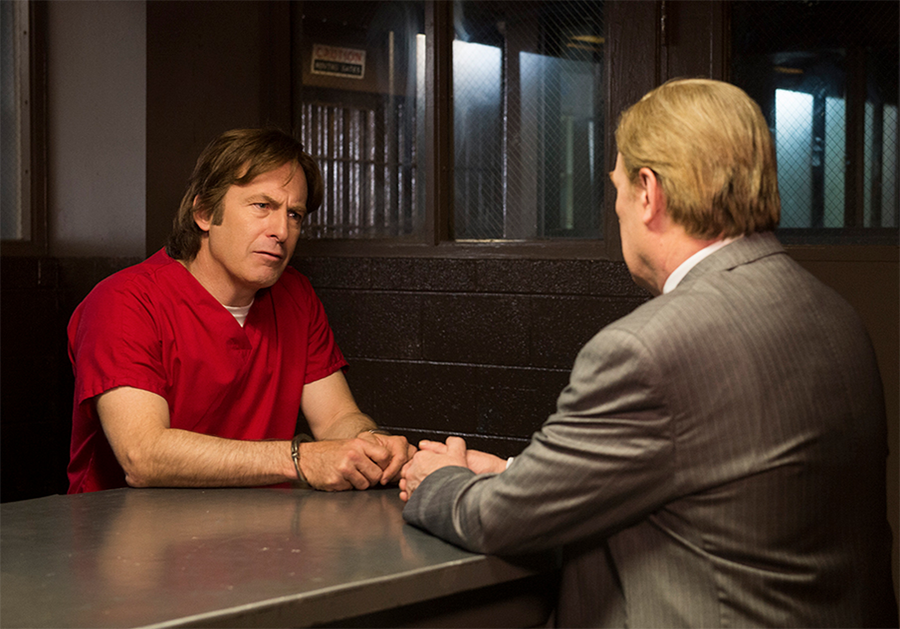 If you’re loving Better Call Saul, you’re not alone. The show is currently the second-highest rated cable show only second to The Walking Dead. This means there’s more to the show than just being a prequel to Breaking Bad.

In the television and movie world, there’s something that’s known as an “Origin Story.” Basically, this is the story of how the lead characters got to where they are. This can be told as flashbacks in a show, or in the case of Saul, as an entire series. This means that Bob Odenkirk, the actor who plays Saul, has a pretty tough job on his hands. He can’t just play the character we’ve grown to love on Breaking Bad, but instead he must be Saul during a time when the fictional character wasn’t even Saul as we know him. All the pieces are already in place, now we get to see how they landed.

Where to Go From Here 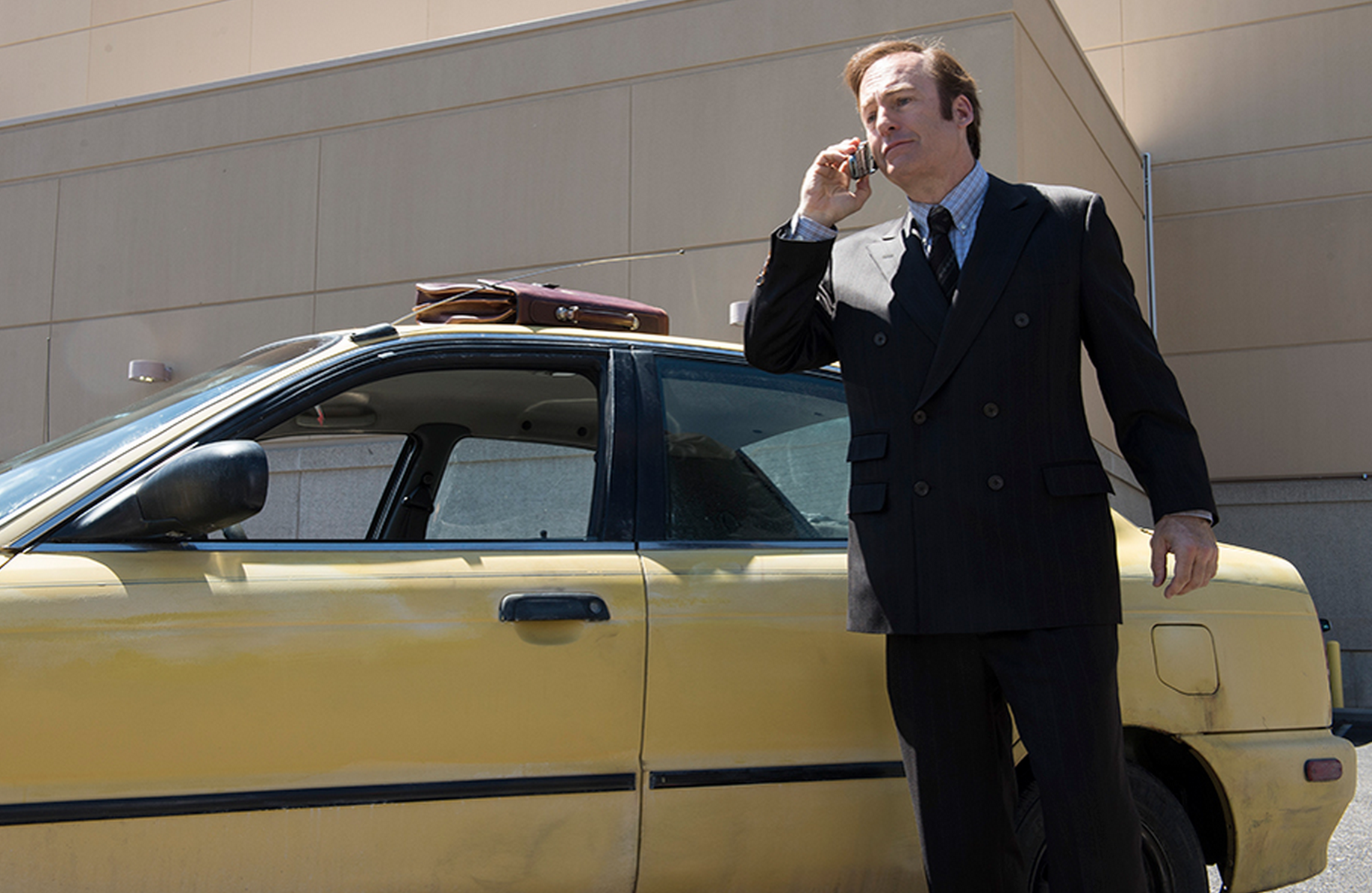 The big question everyone wants to know is when we get to see Walt and Jesse again, but it looks like that won’t be for quite some time. Not only are the pair far down the road for Saul, but including them now would pull focus away from the amazing job that Odenkirk is doing with Saul, or should we say Jimmy.

In Breaking Bad, Saul had a drawer of cell phones and a long list of contacts to call to get just about anything done, including his disappearing artist at the vacuum repair shop. There’s quite a lot of history to go through before Saul meets Walt or Jesse, which in the eyes of the show runners, is exactly how they want it to be.

Breaking Bad was a show that focused on the characters, most notably Walter. All the other characters revolved around him like planets around a sun, forcing the writers to build each character out deeply and thoroughly. Better Call Saul is shaping up to be the same, as we’re looking into Jimmy’s life and his past even before this new show to see what makes him tick. Getting to meet characters like Mike and Tuco now also show us what drove each down the road that got them to their place in Breaking Bad.

Expect to see lots more character development and even more backstory so we get a true understanding of what drives each character. Also don’t expect the path each goes down to be a good one. Many of these people are far from good folks, which means there needs to be a lot of story behind how they got that way. Vince Gilligan is hoping to make another dark show that’s deeply entertaining, and if the first three episodes have anything to say about it, he’s off to an amazing start. We’re looking forward to seeing more of Jimmy, and how he finally becomes Saul. 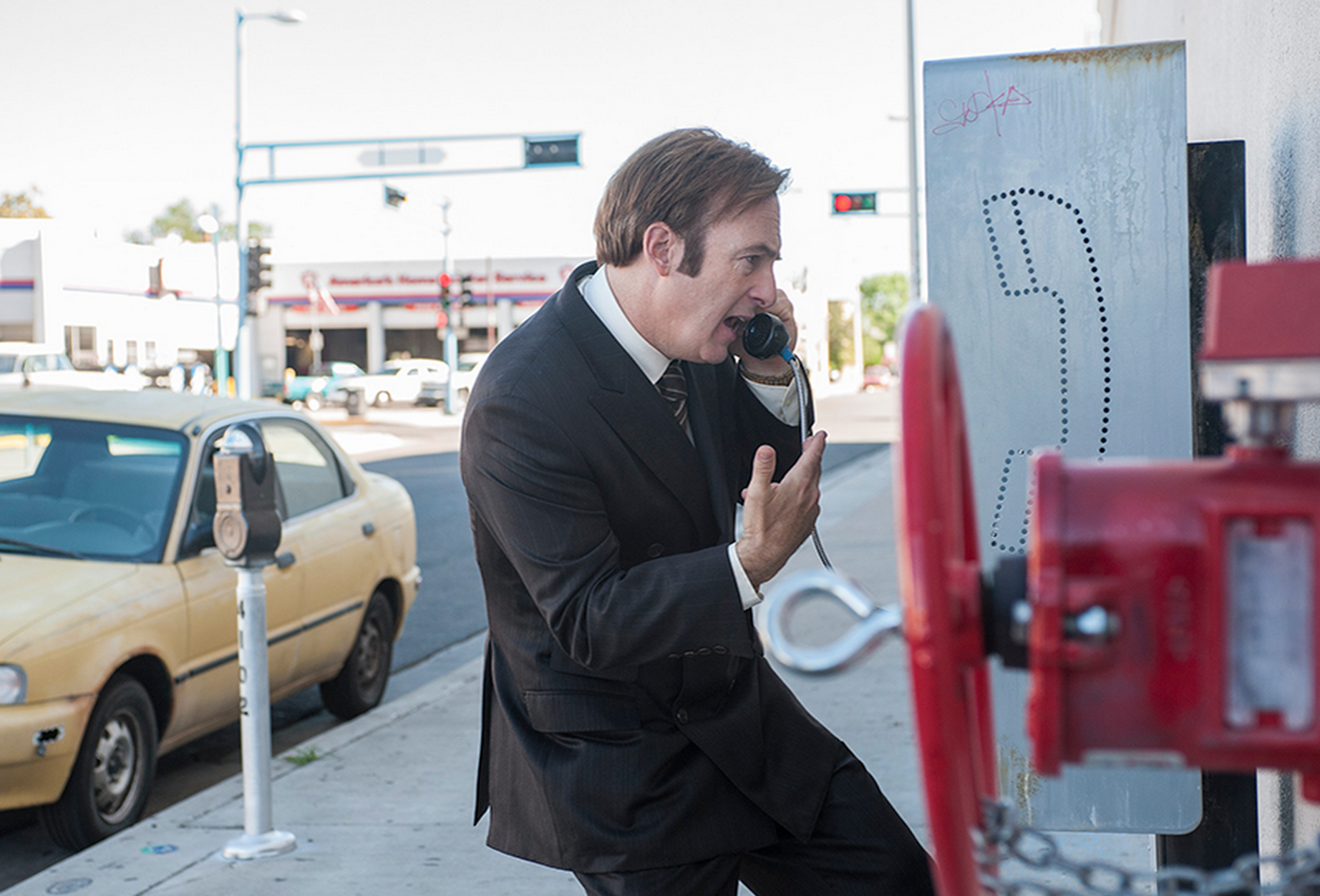 So what do you think of Better Call Saul? Let us know in the comments below.

Brian Meyer
Brian is a nut when it comes to all things local, especially beer. Born and raised in Center, he now resides in Beaver, loving every minute of it. A technology nut and freelance writer extraordinaire, he knows all the secret spots and things to do in the Beav.
 Share this article:  Facebook  Twitter
Reverend William A. Doyle, Darlington February 21, 2015 By In Memory
0
Comments
Bradley George Massie, Center Twp. February 20, 2015 By In Memory
0
Comments