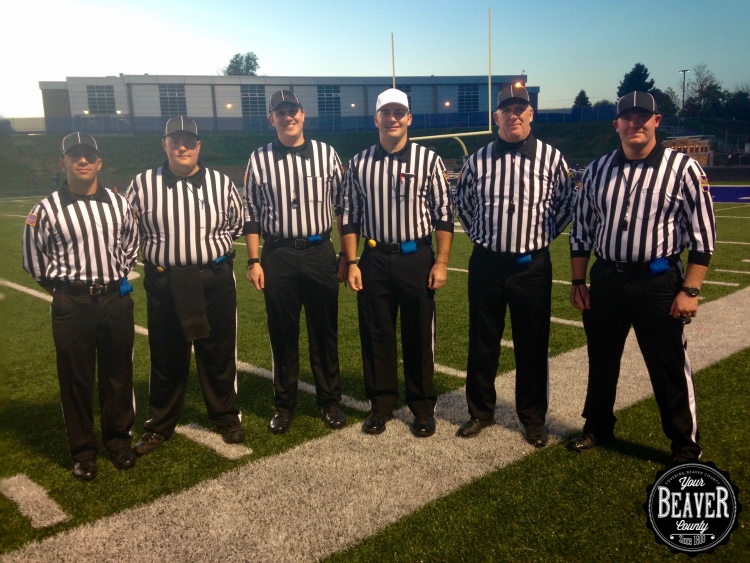 The Beaver Valley Football Officials need your help! Has football officiating ever crossed your mind? If so, it’s time for you to look into what it takes to become an official.

There are many perks and benefits to being a football official. Three of the most prevalent are the pay (it’s pretty good!), the camaraderie you build with other officials, and the fact you are right in the middle of all the action.

So, what exactly does one need to do to become an official?

There are no prerequisites whatsoever. You don’t need any playing experience or prior officiating experience. Anyone can become an official. But there are a few steps you will need to follow in order to make that a reality.

First, and most importantly, you must pass the PIAA football exam. There are 3 tests during the year -February, June, and October. They are administered at two locations in the Pittsburgh area – Keystone Oaks High School and Brashear High School. To maximize the amount of games you can officiate, the Beaver Valley Football Officials chapter recommends that you take either the February or the June exam. If you decide to join late, there is an emergency test in the beginning of August at the PIAA official’s convention in Mechanicsburg as well. Once you pass the test, you will be required to join a chapter. Most Beaver County officials are in the Beaver Valley chapter.

Second, you must have the proper uniform and equipment. Most officials in the WPIAL purchase their gear from Officially Sports located just north of Sewickley in the Mount Nebo area. Start-up costs for football officials usually range anywhere from $250 to $300, but you can usually recoup what you spend on gear in a couple weeks of officiating. Generally, most officials will purchase the following:

Third and finally, officials must have a good attitude, work ethic, strong interpersonal communication skills, willingness to learn, and the desire to improve your officiating every year.

The Beaver Valley Football Officials meet weekly during the season (mid-August to mid-October) at the Beaver High School library. Officials are required to attend six meetings plus the mandatory state rules interpretation meeting at the beginning of August. The Beaver Valley chapter assigns junior high and junior varsity games.

Youth football is completely separate of the chapter, however there are many officials in the Beaver Valley chapter who officiate for the Beaver County Youth Football League (BCYFL). Varsity assignments also come from outside the chapter, and you have to be asked to join a crew, or the same group of six officials who officiate varsity games every Friday.

For more information on becoming a football official and a member of the Beaver Valley Football Officials, you can contact their rules interpreter, John Spencer at 724-650-0637, or by email jspence7428@verizon.net,or chapter president, Tim Linkenheimer, at 724-622-6771, or by email teched_timlink@yahoo.com.

Fill out my online form.