Beaver County's Party of the Year: The BCCI Sportsman's Bash 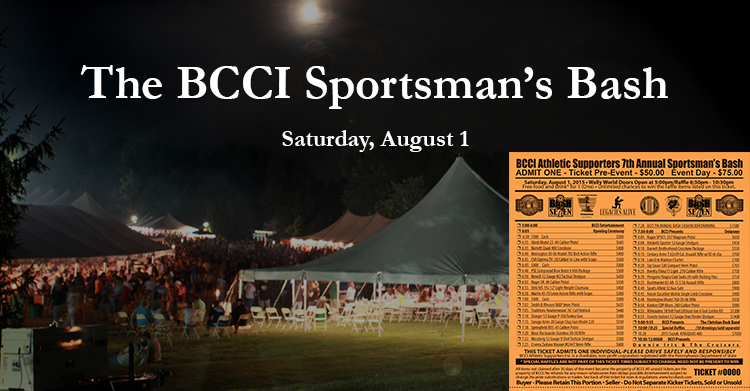 There are quite a few marquee events throughout our county every year. From the Maple Syrup Festival to 4th of July celebrations, to the San Rocco Festa, Beaver Countians have a few big events to look forward to.

But the party of the year is without a doubt the BCCI Sportsman’s Bash, also known as the “gun bash.” And they are ready to rock and roll once again from their South Beaver Township location of “Wally Word” on Saturday, August 1.

The Sportsman’s Bash, now in its 7th year, isn’t just your run-of-the-mill party. It’s a huge fundraiser, and monies raised from the event are awarded to several worthy causes.

First, let’s take a closer look at BCCI and their mission. BCCI is made up of five board members – co-chairs Tom Petti and John Dudo, marketing & promotions chair Steve Dillon, Karen Teams, who is their treasurer,  and Randy Rowe as secretary.

Their mission, in short, is to not only support youth sports in the Blackhawk School District, but recently, they’ve directed monies raised toward a few organizations that support military families: It’s All About the Warrior Foundation, Legacies Alive, Crusaders in America, and Vietnam Veterans of America.

To financially support/aid local youth sports organizations within the Blackhawk Area School District in order to help young athletes grow academically, athletically and socially. BCCI focuses on the needs of youth and teen sports programs in order to enhance their abilities in offering players a better environment in which to practice and perform. By assisting each sports program, BCCI hopes to touch the heart of every player so one day they too can contribute to a cause that will help others.”

In the first six years of fundraising through the bash, BCCI has donated over $250,000 to help youth sports in the Blackhawk School District. That’s a big chunk of change. And to know it’s impacting kids’ lives makes it extremely worthwhile for the committee.

What is the Gun Bash

Now, on to the bash itself. It’s held in a place called “Wally World” off of Old Blackhawk Road in South Beaver Township. Just use your map app on your phone and plug in 458 Old Blackhawk Road, Beaver Falls, and it’ll take you right there.

You park in a giant field and walk to the main entrance of the bash.

Tickets are $50 in advance and $20 for the “kicker.” The “kicker” gives you a second chance of winning a plethora of prizes that are raffled off every few minutes, and also makes the ticket holder eligible for a $1,500 cash “kicker” drawing.

Buying the “kicker” is optional, and does not include an admission for a second person. If you want to buy tickets at the event, the price goes up to $75 for standard admission, and the “kicker” is still $20.

Tickets can be purchased in advance on the BCCI website: http://www.bccisports.com/tickets-rules/. They accept most major credit cards along with PayPal.

Your admission ticket entitles you to one entry into the prize drawing, plus a meal ticket for dinner, and beverages are provided by Iron City Brewing. No one under 21 is permitted into the bash.

The doors open at 5 pm, with the first drawing taking place at 6:30 pm. Prizes are raffled off every two to five minutes until the last prize is awarded at 10:30 pm. Prizes range from cash, to guns, to fishing charters, to crossbows, to the grand prize – a Suzuki king quad, valued at $7,000.

Don’t miss the opening ceremony at 6:00 which features a full  military color guard and a tribute to our service men and women, veterans, and our fallen heroes.

Blackhawk alum Dominic Nardone said, “It’s just a great event with an amazing turnout. It helps bring the community together, and something that we all look forward to each year.”

Finally, the entertainment. What would a party be without Beaver County’s favorite bands?

The Delaneys, led by lead singer Zig Daniels, take the stage at 7:30 pm.

At 9 pm, the Christian Beck Band will play a little country for the crowd.

At 10 pm, the headliner, none other than Donnie Iris and the Cruisers, perform from 10:30 pm to midnight. Yinz know Dahnie Ahris, right?

The evening closes out  with an awesome fireworks display.

Event organizers project over 2,500 people will attend this year’s bash. I attended last year’s bash and can attest this event is like none other. It’s truly one-of-a-kind, and the proceeds are going to worthy causes. If you’re interested in purchasing tickets, visit http://www.bccisports.com.