It’s nearly impossible to claim to be from Beaver County – or to even drive through the county – and not ever witness the giant flag that flies high above the confluence of the Beaver and Ohio rivers.

The Beaver County Flag Plaza was part of a larger project called “Flags Across America,” whose goal was to install a flag plaza similar to our own in every county across the nation. The Flag Plaza at Riverfront Park was one of the early installations, the 11th project completed nationwide.

And while there may be times you drive across the bridge and are unable to see the flag blowing in the wind, have no fear, the flag isn’t gone. According to Matt Cucinelli, president of Beaver County’s Flag Across America, the flag is often taken down in the harsher, winter months to preserve its appearance. The Rochester Borough Street Department displays the enormous flag every spring, when the weather is more cooperative. 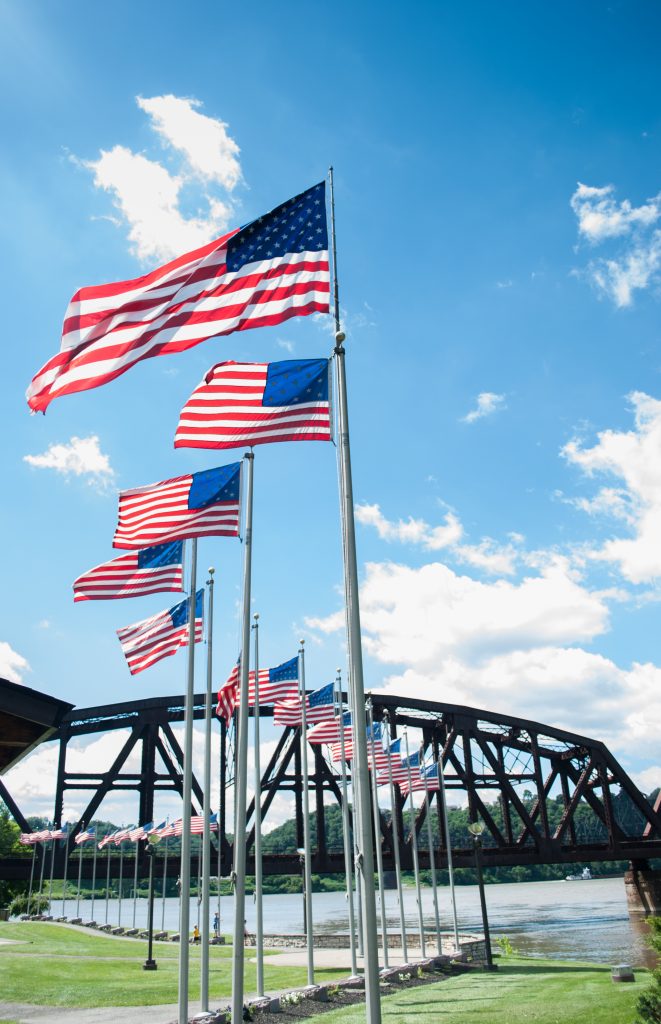 This enormous Old Glory is surrounded by 26 smaller flags which represent when each state was added to the Union.

Encasing the entire half-acre plaza is a 26-foot granite wall – made locally by Rome Monuments – etched with the history of our nation’s flag, including facts, directions for showing respect, and the first verse of the “Star Spangled Banner.”

Riverfront Park, home of the flag plaza, sits on Water Street and Island Lane within the borough of Rochester. Not only does this park have amazing scenic views of the river and neighboring towns, it also contains a 2-mile paved walking trail, a park shelter available to rent, and a small wooden playground with swings for the kids.

The land along the river that is now Riverfront Park was once known as “Logan Town,” a settlement of Mingo Indians named after Chief Logan who had his lodge along the river. The mouth of the Beaver River was an important meeting place for Indian Tribes, both in times of war and peace. Many Indian relics can still be found in this area.

There isn’t just history along the banks of the Beaver River, but also under it. The historic Girard Locks were once an important component of the lock and dam system along the river in the 19th Century, allowing the river to be navigated by more than just the personal watercraft we are used to seeing on the river today. A section of the lock still remains visible on the Rochester side of the river, just south of the Bridgewater Bridge.

So next time you drive pass the county’s largest flag, take a detour down to the park below the bridge to explore the riverfront and the beautiful plaza – something every Beaver countian takes pride in.

Lauren Walker
Lauren Walker was born and raised in Pittsburgh and became a resident of Beaver County through marriage. She now lives in Beaver with her husband, three kids and little dog. She is an optimistic Pirates fan, decent church softball player, and digs an organized closet.
 Share this article:  Facebook  Twitter
A Big Time at the Big Sno July 5, 2017 By Ana Beaverhausen
0
Comments
Celebrate the 4th in Midland: America's Hometown July 3, 2017 By Whitney Scelp
0
Comments