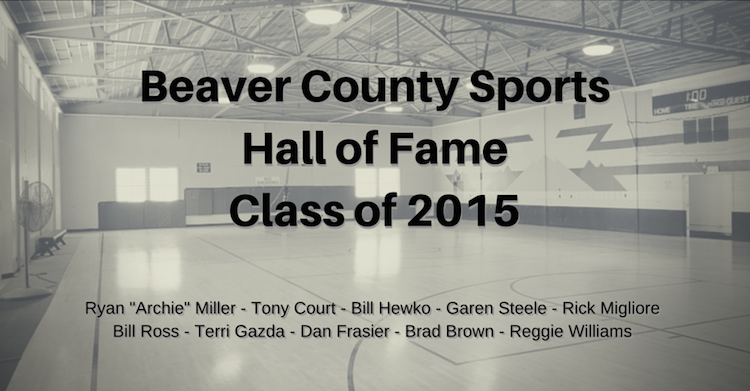 One of the elite fraternities in Beaver County sports is the Beaver County Sports Hall of Fame. The Hall of Fame celebrates and remembers the outstanding accomplishments of those who have left an indelible impact on our sports landscape. They are our childhood heroes, our mentors through school, and people we look up to for their exceptional character, talents, and skills.

On Sunday, April 26, 10 more inductees will be enshrined into the Hall of Fame at a banquet held at the Fez in Hopewell Township. Let’s take a look at this year’s inductees.

The class is headlined by current Dayton men’s basketball coach, Ryan “Archie” Miller, from Blackhawk. Archie joins his dad, John, and his brother, Sean, who are also members of the Hall. Archie played point guard at North Carolina State before beginning his coaching career. He led Dayton to the Sweet 16 of the NCAA tournament in 2014, and recently signed a lucrative contract extension with the Flyers.

Tony Court, of Ellwood City, who is being inducted for being one of the top basketball officials in the state over his career.

Bill Hewko, of Freedom, who starred in basketball at Freedom and Geneva College in the late 1950s and early 1960s.

Garen Steele, of New Brighton, the longtime golf pro at Black Hawk Golf Course, and one of the top golfers in the area for a very long time.

Rick Migliore, of Midland, who is one of the all-time greats to play in Beaver County. Migliore was the starting point guard on Midland’s 1973 and 1974 state championship teams under head coach Ed Olkowski.

Bill Ross, of Beaver Falls, who served as teacher, coach and athletic director at his alma mater. Ross did it all at Beaver Falls. He was on the Hall of Fame’s original organizing committee, and will be inducted posthumously. Ross died suddenly of a heart attack at the age of 55 in 1976.

Terri Gazda, of Hopewell, arguably the greatest gymnastics coach in the history of Beaver County. She has taught and instructed many accomplished gymnasts on the local level.

Brad Brown, of Riverside, who starred in basketball and football, is being inducted for his accomplishments on the hardcourt.

Reggie Williams, of Beaver Falls, who will be enshrined for being a standout football player for the Tigers. Williams was also recognized at the 1985 banquet while still in high school, and was one of the school’s all-time greats at running back and wide receiver. Williams often drew comparisons to legendary Tiger Dwight Collins.

The Beaver County Sports Hall of Fame is a non-profit organization dedicated to honoring those who have brought fame and recognition to Beaver County through their contributions to the world of sports. Founded on September 18, 1975, by Alex Scassa, Sr., the Hall of Fame has inducted 395 members at its annual banquets.

The Sports Hall of Fame was formerly housed in the Golden Dome of the Community College of Beaver County in Center Township, Pennsylvania. Inductee plaques are currently housed at the high school or college most associated with the inductee.

Marc Grandinetti
Marc is a lifelong resident of Beaver County. A 2001 graduate of Center High School and 2005 graduate of Point Park University, Marc is employed by the Pennsylvania Cyber Charter School and officiates high school and college football. Follow Marc on Twitter, Snapchat, and Instagram @marcgrando
 Share this article:  Facebook  Twitter
I Had to Hide for so Long... April 25, 2015 By Elena D'Agostino
0
Comments
Mary Elizabeth Simon, Beaver Falls April 24, 2015 By In Memory
0
Comments