Beaver County Shark Attacks: Causing You Pain When You Least Expect It 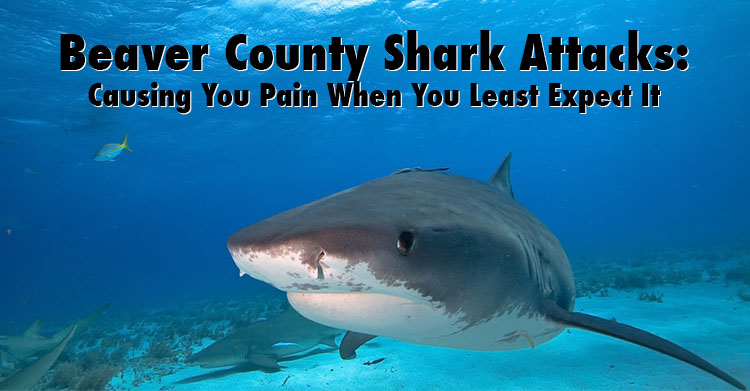 Here in Beaver County, we aren’t home to any oceans or seas, and for that we should consider ourselves lucky. While we do have a river, it is not home to any salt water inhabitants. We are lucky because this means no sharks.

Swim, tube, water and jet ski all you want down that muddy Ohio because you know that should you hit the water, nothing will be chomping at your limbs.

I came across a video online last week that pretty much summed up that whole shark attack situation. And it stated, “When you go to the beach, you go to the BEACH. Do NOT go to the ocean. Be mindful of a shark’s house.

When a chicken walks in my house, I am going to eat it. When peas are in my house, they end up on my plate.” Incredible.

So, in honor of Shark Week (and in dishonor of the many attacks this summer,) here we go…

Besides the fact that I wore long sleeves to work on July 1st, why aren’t the potholes from winter patched up yet? Seriously, WHEN will winter completely go away? And the “PennDOT sucks” joke is so tired, I won’t even mention it.

But for real, has anyone driven up Kermiet Drive in Monaca lately? I’m pretty sure one of my kidneys is at the bottom of one of those holes.

I’m also pretty sure my car needs realigned. One point for the first-hand physical pain.

And how can we talk about how potholes without talking about all of the construction?!

I completely understand that this winter was brutal for working outside, and I don’t fault anyone for not getting projects done on time. Annnnnd since we live in Seattle (Pittsburgh), I understand it’s hard to work in the rain, too. But if we aren’t working in the rain, why are we pretending to Work. In. The. Rain?

One lane of a two-lane highway doesn’t need to be closed unless you’re actually working on it! Amirite?? NOTHING is worse in one single lane than getting behind a tractor trailer going 10 in a 35.

Especially when the barrier that’s separating you from the empty lane to your right is plastic. Cold, orange, plastic. Orange plastic = road rage and road rage = mental pain.

Who in Beaver County doesn’t love a good smoke stack?

If you don’t, then you should probably find somewhere else to live because we’ve got plenty.  Breathing fresh air doesn’t exist around here, and if you’re one of the people on “that” side of the river with the heavy wind stream, then you really know what I’m talking about.

I feel like this topic could cause some major drama in the comments section so I’m just going to leave it at this:  Black Lung Disease = physical pain.

Yes, I am talking about the one in Rochester. That place is like a damn maze anymore!

As if finding your way around Pan’s Labyrinth wasn’t enough, that one person who always seems to be following you around will now have to stop and ask you where eggs are since they have no idea and guess what?!  You won’t either.

I can’t believe I even just typed that word. I love walking down at Brady’s Run so this is literally my biggest fear. If there is one repulsive thing in this world, it’s a tick.

Like how that eenie-meenie, teenie-tiny thing can literally shut down a person or animal’s life is beyond me.  Yes, I’m talking Lyme disease. I don’t understand how they’re even alive after this winter!

When I walked from my mailbox to my front door, I became a Walt Disney, so how they survived 5 months of sub-arctic temperatures is a mystery to me. (Which by the way completely aligns with my ‘insects are aliens’ theory, but that’s a different story.)

I’m starting to think the whole ‘you get what you pay for’ thing is a lie because at $10 a month I’m getting more entertainment than I could ever receive from my $200 a month Comcast bill.

I just looovvvvveeeee seeing treadmill walkers in John Deere cutoff tank tops and jean shorts (who leave a mud trail on the treadmill belt) and the weightlifters checking themselves out in the mirror while trying not to set off the lunk alarm. (Side note: Planet Fitness’ weights only go up to 80 lbs and they don’t allow squats or deadlifts…sooo why are we trying to body build here in the first place?)

All these people (minus maybe the lunk) are also probably chowing down on that free slice of pizza.

Let’s talk about that. How does that work? Pizza in a gym… whose slogan is “The Judgment Free Zone.” LOL.

And I’m sure they won’t forget to grab a handful of Tootsie Rolls for dessert on the way out!

What here in Beaver County makes you feel like you’ve just got bitten by a shark?!