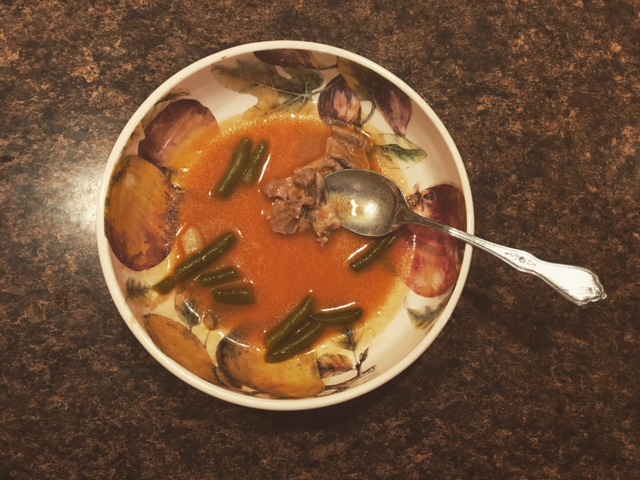 This article is sponsored by our friends at Beaver County Auto.

Beaver County is a melting pot, filled with ingredients found all over the world, who have come here to stew and simmer and create our own flavor of people. These flavors are showcased in YBC’s many articles, filled with foods from local eateries. I want to take a closer look at our Beaver County and give our readers the opportunity to share their own family recipes and stories.

These past few weeks have been filled with celebrations and traditions, often surrounding those tried and true family recipes, that have been passed down from generation to generation, many across miles of land and seas. Wedding soup, lasagna, latke, and kielbasa. Kraut, pierogies, cabbage rolls, oh my! We wait for these delicious meals throughout the year, savoring every bite.

But, I don’t want to focus on those. They already have their home in the much-deserved family hall of fame. Instead, I want to showcase your every day recipes. The meals you share on Sundays or cold wintery nights, your grandma’s vegetable soup or your uncle’s ribs. These were the meals that kept families together, the ones that memories were formed around, while laughing and talking, dipping crusty bread into homemade sauce every week.

To launch this look into our hearts and bellies, I want to share with you one from my own family. My great grandmother’s “Chicken, String Beans, and Potatoes.”

This was a meal that started it all. While searching for those traditional Thanksgiving family recipes, I came across this one in my mom’s cookbook. I had remarked how we hadn’t made it in years and how much we loved it growing up. Looking over the recipe, I chuckled. It was obviously rattled off, without much thought, to my mom, who transcribed it into her cookbook. I posted the original below. After making it, I clarified the instructions a little for you, but you can tell this was the work of a woman who knew exactly when to add the water or what color the roux should be.

I can vividly remember the way the warm smell of the soup filled up my grandma’s apartment and the little iridescent circles that floated on top of the pot from the grease. The potatoes would turn an orange color and they would be so soft that you could smash them between your tongue and the roof of your mouth.

This recipe belonged to my great grandma on my father’s side. When I asked my dad and aunt what they called her, they both laughed and said, “gram-ole”. It sounds like “grandma” and “mole” ran together. My dad shared that he could remember seeing it cooking on her white stove, in a big white pot. Reminiscing about the soup stirred up other memories of her culinary talents. He went on to share about how he and his grandfather would go hunting near an apple orchard. Instead of worrying about the rabbits and squirrels, his grandfather was more concerned with collecting apples for his wife to make apple strudel. While stuffing the apples in his shirt and pack, he had slid on a rogue apple, causing the apples to fall out everywhere, rolling down the hill and ruining any chance they had at bringing home much else besides the bruised apples. He nor his grandfather was too upset about their lack of game, once the strudel was done.

I did tweak the recipe slightly, which you’ll find below in the parenthesizes, but don’t tell my dad! Bowl after bowl, he and I ate the entire recipe in one sitting. About three bowls in, I asked if it tasted authentic. Laughing, he said, “I’d pay $5 for this.” He explained that was what his dad would say when my aunt would make something really good. I’d say that’s the best compliment I’ve received.

Fry bacon lightly. In same pot, (you’re making a roux here) add oil (about 2-3 tablespoons), onion, and flour. Stir constantly into a smooth paste, cooking until golden brown. (My roux had a hard time coming together, so I kept adding chicken broth until it was a nice thick sauce.) Stir in paprika. Add cut up chicken pieces and water enough to cover chicken. (I did not use water at all. I substituted chicken broth. This is a soup, so it ended up being about 4 cans of broth to cover everything.) Put in celery, green pepper, and bacon. Cover and cook until chicken is half done. (This was about ten minutes covered.) Add diced potatoes. Cook until done. (Another 10-15 minutes.) Add drained green beans and tomato soup. Stir gently and cook about 10 minutes longer. Salt and pepper to taste. Add more water until desired consistency.

I hope you enjoy this recipe, which could easily be made on a busy weeknight or Sunday supper. I would love to hear from you and share your family recipe and story on YBC. Please email me at whitderr@aol.com. 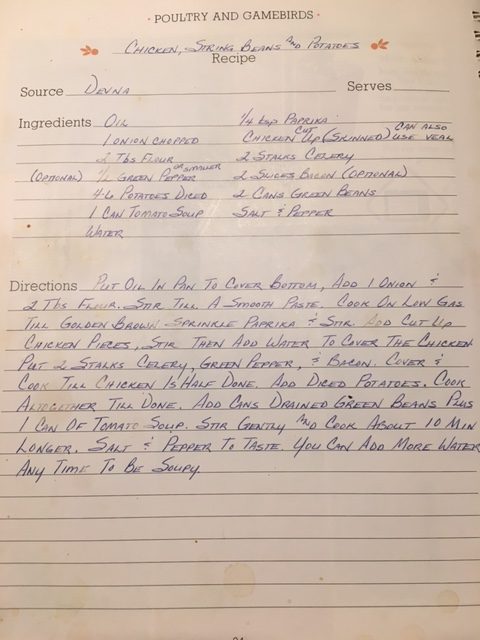 Whitney Scelp
Born and raised in Beaver County, Whitney graduated from Geneva College, is a nurse at the local hospital, and still resides in the area. She is looking forward to training her daughter in the ways of Beaver County…such as Hot Dog Shoppe chili dogs, Midland Fourth of Julys, and pierogies. Follow her on Instagram @wandering_wannabe for her local and not so local favorites.
 Share this article:  Facebook  Twitter
I've Grown Up Here January 3, 2017 By Brianne Kovacs
0
Comments
I Just Like to Make Things Beautiful January 1, 2017 By Brianne Kovacs
0
Comments