25 Beaver County Foods You Must Eat 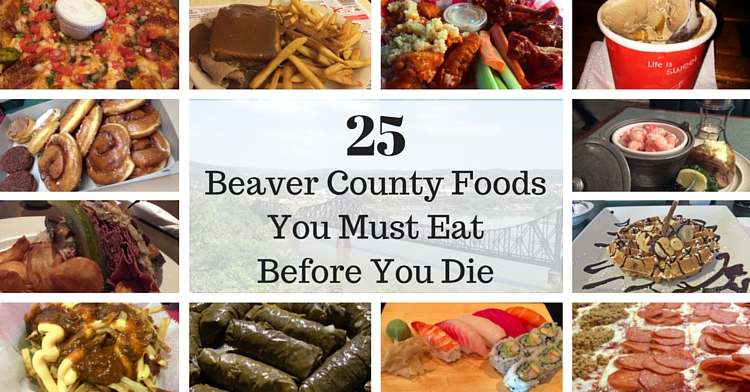 This article is sponsored by the YBC Directory. If you are looking for a simple way to get great exposure for your business at an extremely resonable cost, check out both our monthly and yearly plans and get your business found today!

Food, food, food. When in doubt, write about food. We’ve done several lists, top 10’s, top 5’s, and ‘best of’ over the past year at Your Beaver County. But we’ve never done a list like this.

This is your ultimate bucket list / food list from everywhere in the county. This is the “Top 25 Beaver County Foods You Have to Eat Before You Die” list. In other words, serious stuff. Have you tried all of these? If not, what are you waiting for?

To compile this list, I consulted with several food experts and fellow YBC’ers – my cousin, Maura, Anastasia Beaverhausen, the big boss man, Andy, and a mysterious man known to eat large quantities of food that refers to himself as “ManBearPig.”

Let me know what I missed in the comments below!

In no particular order:

Kretchmar’s is a renown bakery known for a lot of good treats. Their sugar cookie is to die for. Get it, to die for? Foods you have to eat before you die? Ha. This isn’t the last thing from Kretchmar’s on this list.

Say sayonara to trips to Robinson or the ‘Burgh for sushi when you get the good stuff in downtown Beaver. I’m a huge fan of their sushi. Their lunch special is can’t miss, and their special maki rolls are also on point. And it’s BYOB.

Simply the best. Bert’s is a staple among Beaver County restaurants. Andy cited their consistency to everything they do that separates them from the competition. Their French onion soup is no different. Plus I love using the word “crock” when referring to soup.

I feel like sometimes we go overkill with our adoration for the Brighton HDS, but it’s valid. Their chili cheese fries are special. Just special.

The best in Beaver County. Chef Rich’s handmade corned beef is outstanding. We even did an article and video that explained how he makes it.

This waffle is stuffed with chocolate chips, then covered in chocolate syrup, bananas, powdered sugar, peanut butter, and Hershey’s bars. Yes, this is real life. And yes, you need to try this ASAP.

A consensus pick among the panelists. Harold’s famous mountain-style seasoning is used not only on the chicken, but the taters, too. And they’re gluten free!

Nothing screams Lent like fish fries and pierogis from St. Mary’s Church in Ambridge. These little dumplings are so popular you have to call your order in days ahead of time. I’ve had them, and they are legit. It’s food like this that makes western PA special. You can’t find this stuff in other parts of the country!

I’ve never had the fish from Harry’s in Darlington, but I know people who have, and it is their #1. I need to make it a priority to make it out to Harry’s next Lenten season.

I know, I know. How could I not have Frank’s or Police Station on here? Well, D&G is a Beaver Falls original. I’m pretty sure this was the first pizza I ever had as a kid. The truth of the matter is that we have a lot of good pizza spots in the county. Corey even wrote about his top 5 list in one of his first articles ever for us.

Papa Dukes’ Greek eggs with gyro meat could possibly be the breakfast in Beaver County. I actually just had it this past Sunday to confirm my beliefs. It’s basically an omelette with a healthy portion of their famous gyro meat, peppers, and onions, and served with home fries and toast. Outstanding!

My favorite from Kretchmar’s. Their almond torte is in a league of its own. If you haven’t had it from Kretchmar’s, make it a point to get some the next time you’re in Beaver.

Like the pierogis, grape leaves from Aliquippa’s Lebanese Club are an old-world tradition. They’re made the old fashioned way. You won’t find a better grape leave in Beaver County.

Andy introduced all of us at YBC (and a lot of our readers) to Eric’s Gourmet in downtown New Brighton. One Beaver County foodie described Eric’s Gourmet apple pie as simply, “the best.” I have yet to make a trip to Eric’s, but that time is coming…soon.

Wooley Bully’s specialty pizzas are something of legend. Their dough is made fresh on site, and the creativity of the pies are second to none. Their Mexican pizza is my personal favorite. It’s also Andy’s favorite. Anything with chorizo sausage on it is probably a slam dunk, like this pizza.

Fruit at a Brazilian steakhouse? In the words of Sarah Palin, “You betcha!” I get more excited for this pineapple than I do the 10+ cuts of meat they serve gaucho-style. The pineapple is covered in a cinnamon/brown sugar concoction, then cooked and served warm right at your table.

I love the Beaver chips. Actually, my favorite kind are the ones that are barely cooked, and that are stuck to other Beaver chips at the bottom of the basket. It sounds gross, but it’s not. The dill dipping sauce is a perfect complement to the perfect chip.

I used to work at PennDOT in the summers many moons ago, and the one thing the guys I worked with constantly talked about was the gyro from the Ambridge Italian Villa on Duss Avenue. Gyro and Italian usually don’t go in the same sentence, but for me, it’s perfect. The amount of meat they give you on your gyro is heaping…and then some. The Italian Villa is as underrated as they come.

This list would be incomplete without a couple things. This is one of them. Do I need to describe it? I mean, they’re the size of someone’s head. They’re made fresh in Beaver Falls. I like the outer ring of the cinnamon roll for some reason. Anyone else with me?

PJ’s is another underrated restaurant in my mind. It’s right along Brodhead Road, seconds from the Center exit. Their pulled pork salad must be accompanied with their famous “damn tasty” sauce, and then their homemade balsamic goes on the lettuce and fries portion of the salad. The pulled pork is made and smoked on-site. If I was getting one salad, this would be it.

Ambridge, Beaver, and Beaver Falls are leading the way right now with bucket list foods. Chalk up another one for the ‘Bridge. This sandwich is what dreams are made of. You can’t mention Ambridge without mentioning the Maple’s hot roast beef.

I would be remiss if I didn’t include wings on this list. The best? Zooky’s. I wrote an article a while back highlighting my top 5 wing joints in the county. I had Zooky’s #1. I should have a specific flavor or two listed here, but I don’t, because they’re all really, really good.

We finish the list in Hopewell with J.W. Hall’s famous lobster kettle. It’s what they’re known for. Allison even wrote an article highlighting all the great things about the kettle, the signature dish at J.W. Hall’s.