Biba: A Behind the Scenes Look 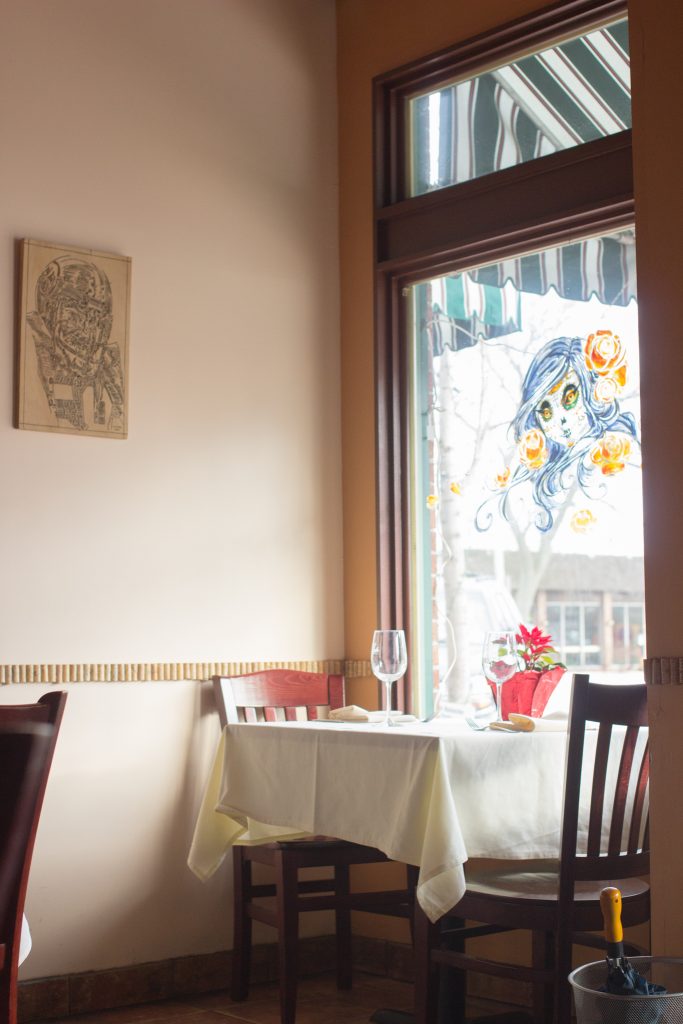 Biba has fast become one of Beaver’s top eateries. Known for their incredible tacos, locally-sourced ingredients, and seasonal menu, it’s no wonder they have made their way to the top. When I mentioned his popularity in the local taco scene, Jason Benegasi, owner and chef, laughed, “If I would have known, I would have made them on Thursdays!” He explained that in the beginning, they would sell out within hours. This popularity led to an obvious decision to launch into the food truck scene. For all of you eagerly awaiting their return, be on the look out in April. In addition to the food truck, Jason also hosts a farm-to-table event each year, showcasing a local farm’s harvest, as well as this past Christmas, per request, he did a Feast of the Seven Fishes. 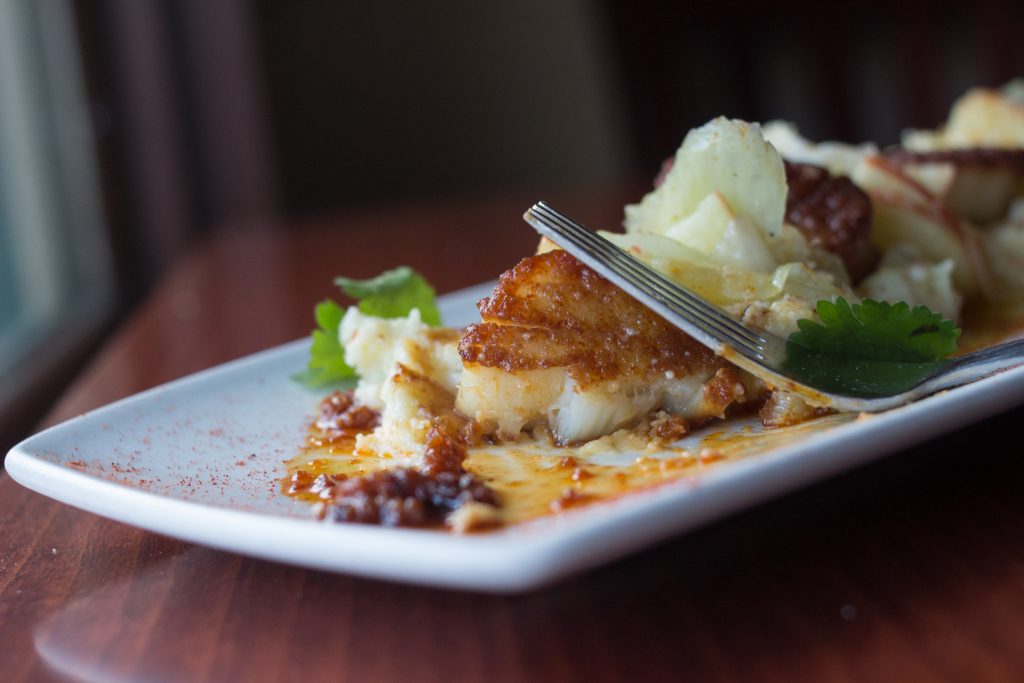 When I asked what set his restaurant apart, he described his menu as, “modern rustic farm-to-table (cuisine) with Latin flare.” He works closely with Fellowship Foods to supply the majority of his ingredients, and changes his menu regularly to reflect the seasonal options available. While holding a tray of perfectly marbled hand-cut steaks, Jason explained that this beef came from a small local farm, who ensures their cows are grassfed and within the last 30 days, add organic beer hops to their diet. This attention to detail is what sets their beef apart, and for Jason, excellent quality is vital. 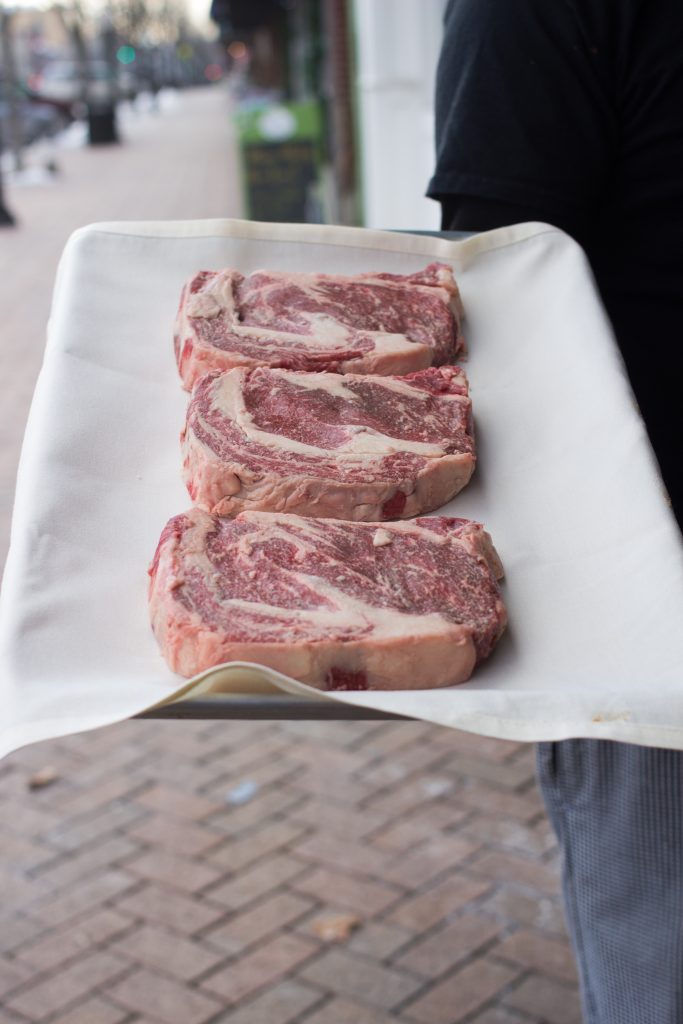 This strive for excellence is evident in who he selects for his own team, Corin, his sous chef and Maria, his general manager. Jason credits the success of Biba to his team, working the line with them, every night.

His passion for supporting local businesses doesn’t end with the ingredients. From the hand drawn portraits that grace Biba’s front windows to the new dinnerware arriving soon, he is always in search of local talent. The beautifully drawn window displays are the artwork of Kitty Evanne, a local artist, whose work he stumbled across on accident. In an attempt to contact her, he reached out to various individuals, all of whom claimed to have had no idea who he was searching for. In a last attempt, he left his number for this “unknown artist”. He laughed, explaining that he wasn’t even 10 minutes away, when she called. This story is a perfect example of his dedication to supporting local talent. In addition to the artwork, Jason recently decided to upgrade Biba’s dinnerware. Working closely with Stray Cat Studio in Beaver Falls, their collaboration created the perfect color and design to meet Biba’s food service needs. 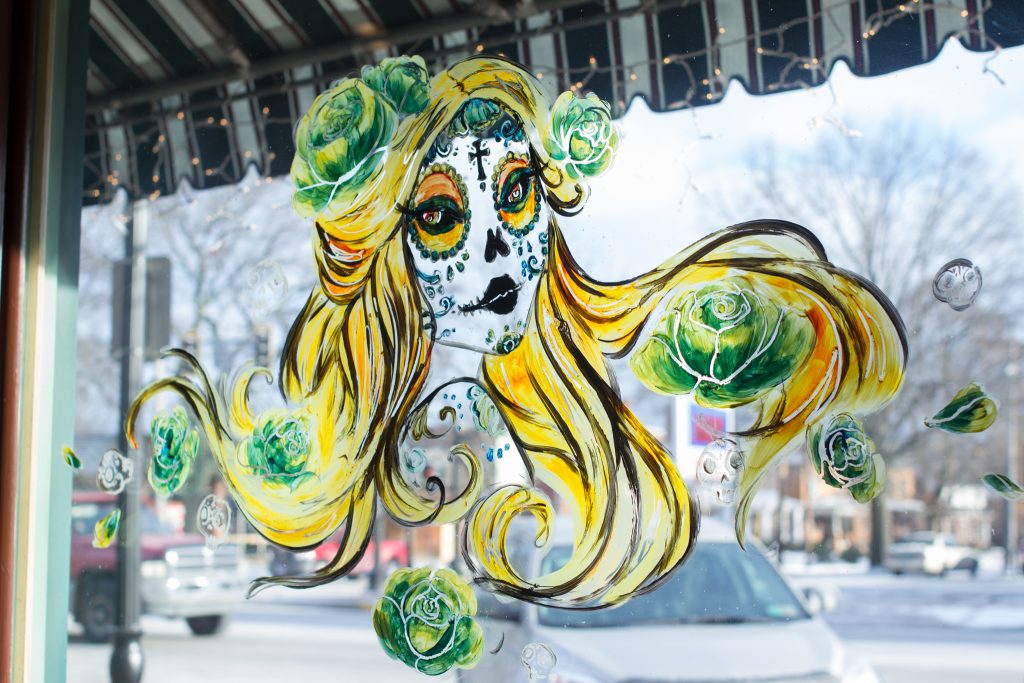 After chatting, Jason surprised us with the opportunity to take a peek into the behind the scenes production of one of my personal Biba favorites – Tres Leche. 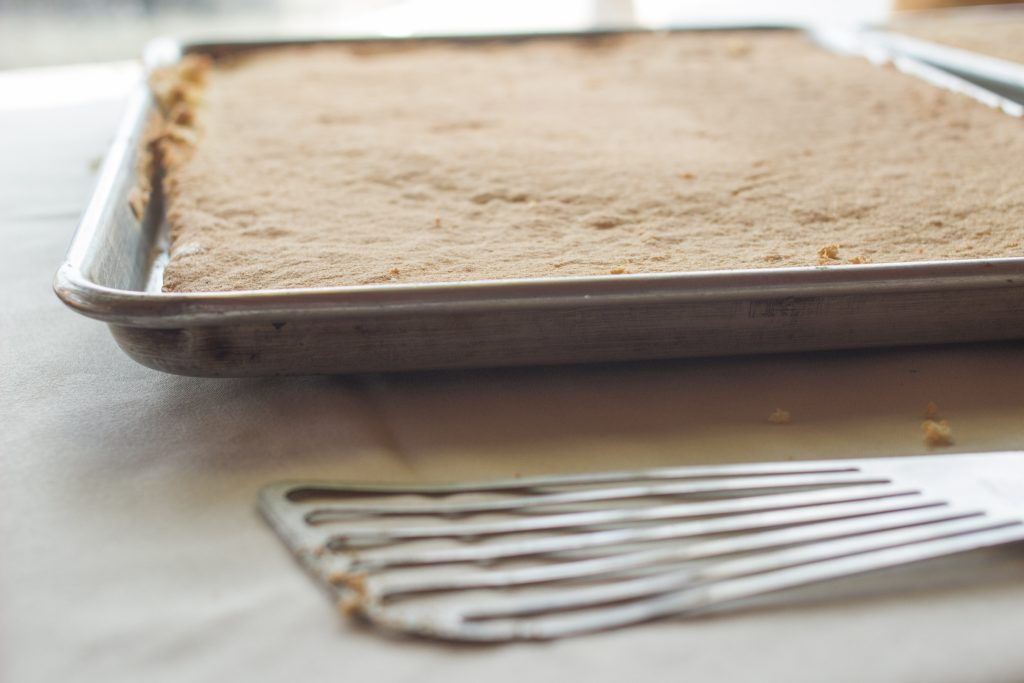 Traditionally, Tres Leche is a dry white cake soaked in a milk mixture and topped with whipped cream. Jason shared that he’s convinced that Tres Leche evolved from “someone’s mess up,” trying to salvage an overly dry cake by soaking it in milk. When I asked Jason why he chose to have Tres Leche on his menu, he explained that he chose it for its simplicity and versatility. He confessed that he doesn’t really like to bake and that also helped form his decision to add the dessert to his menu. However, since Corin came on board, he has taken over the baking. Jason explained that the current base recipe was designed through the collaboration of his staff, and that it is the perfect slate for showcasing seasonal flavors.

First, Jason brought out two large sheet pans of a thin white cake, made with flour, eggs, milk, and sugar. He explained that he uses a technique from his grandmother- he whips the egg whites and folds in the rest of the batter, making the cake light and airy. A perfect foundation to soak up the milk mixture. 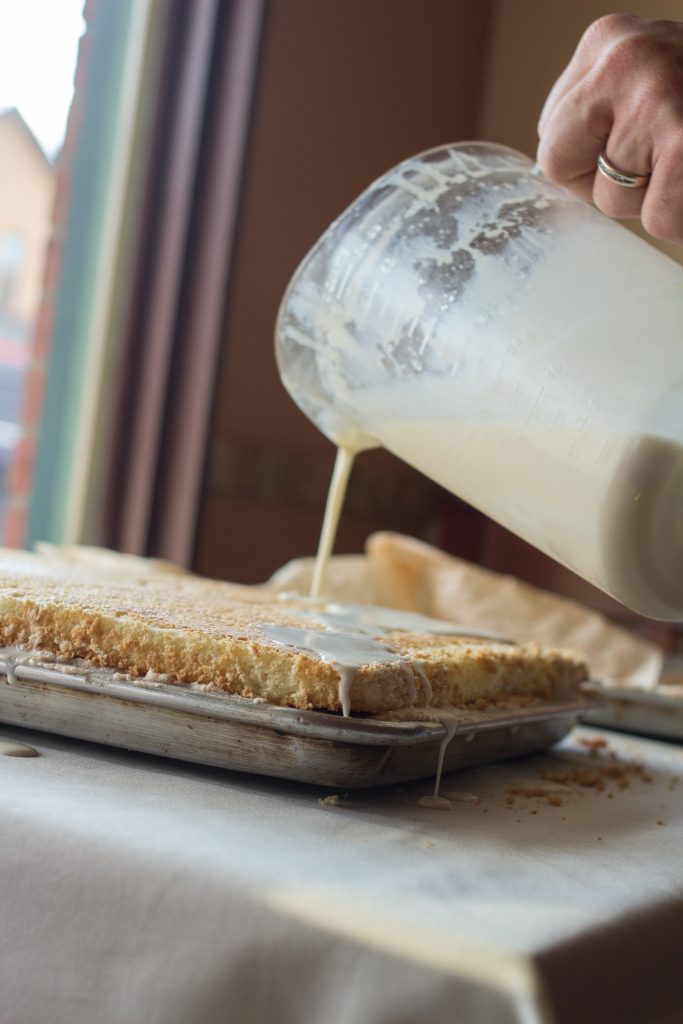 Within minutes, the cake was completely saturated and ready to be filled with a goat cheese mixture and sandwiched together. Goat cheese and a few special spices come together to form a light, tasty filling. One of the areas that can be changed based on available ingredients and tastes. 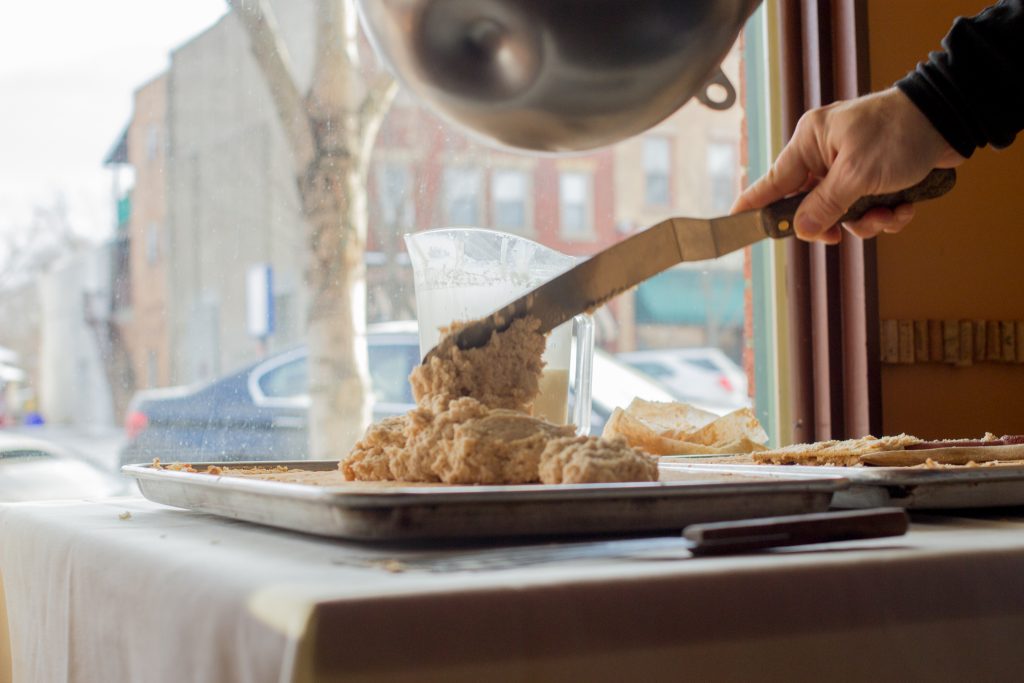 Topping the cake off with freshly whipped cream and roasted pineapple, with the light from the late afternoon sun shining in, it was picture perfect. While I was secretly hoping I might get to try just a little, Jason quickly offered a piece. The sweetness from the pineapple, the creaminess of the milks, and the tang of the goat cheese came together deliciously. My day was made. 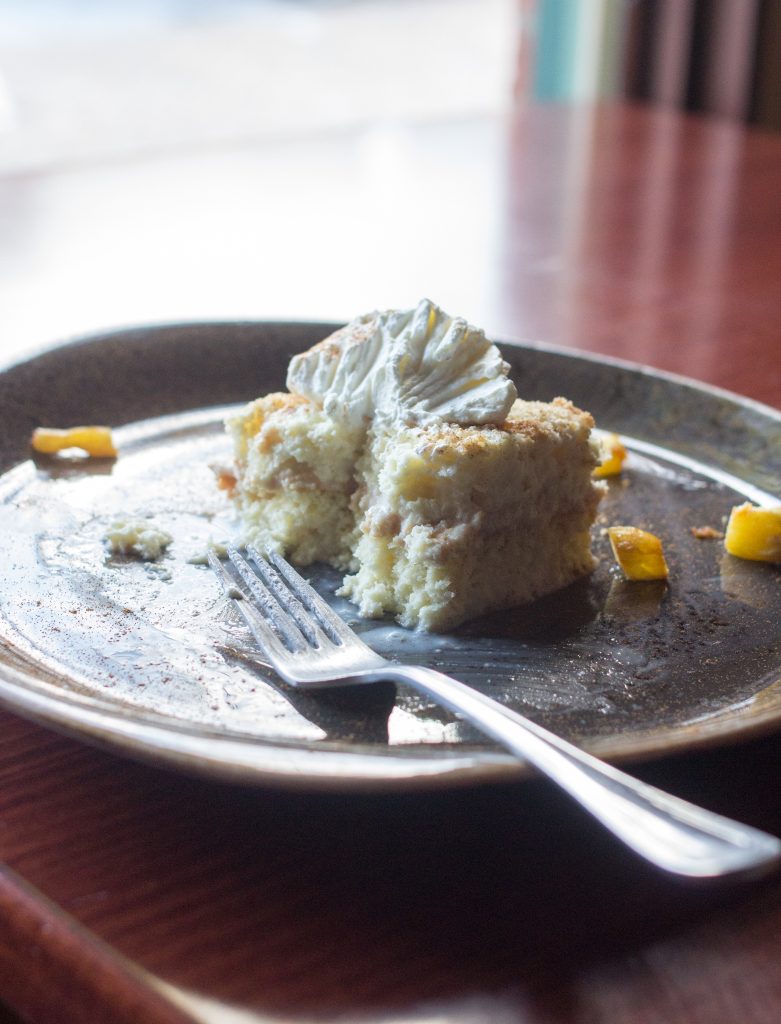 Whether you’re in the mood for something spicy or maybe something a little sweeter, or striving to shop small, Biba will not disappoint.

*Editor’s note: These pictures are the work of Lindsey Ferrie. Lindsey is a lifelong resident of Beaver County, wife, mom of two kids and one Black Lab. She is a professional photographer specializing in lifestyle and portrait photography and is the owner/operator of Lindsey Ferrie Photography. When she’s not capturing those special moments you can find her playing with her kids, channeling her Martha Stewart or binge watching TV shows with her husband. You can view her work at  lindseyferriephotography.com. We look forward to using Lindsey’s photos in the future!

Whitney Scelp
Born and raised in Beaver County, Whitney graduated from Geneva College, is a nurse at the local hospital, and still resides in the area. She is looking forward to training her daughter in the ways of Beaver County…such as Hot Dog Shoppe chili dogs, Midland Fourth of Julys, and pierogies. Follow her on Instagram @wandering_wannabe for her local and not so local favorites.
 Share this article:  Facebook  Twitter
Nobody Cared, We Were Home January 23, 2017 By Erin Ninehouser
0
Comments
Glimpses of Glory - Our Sunday Devotional from Pastor Tom Stein January 22, 2017 By Ana Beaverhausen
0
Comments