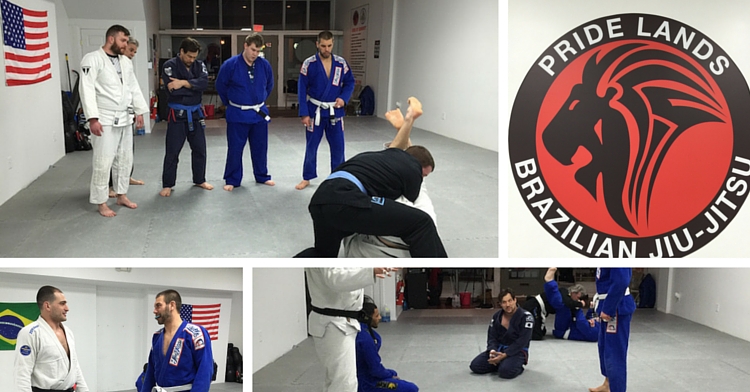 It’s no secret western Pennsylvania and even more specifically, Beaver County, lags behind the rest of the country when it comes to current trends, whatever it may be: fashion, exercise, music, etc. Beaver County has only one true yoga studio, one true indoor cycling studio, and a handful of decent gyms where people can work out. Now, we can add Jiu-Jitsu to that list. In particular, Brazilian Jiu-Jitsu.

Louis Armezzani isn’t from Beaver County. He’s not even from western Pennsylvania. Armezzani, a native of northeast Pennsylvania, relocated here due to work a few years back. Armezzani happens to be a highly-trained black belt in Brazilian Jiu-Jitsu. The 32 year-old has also fought MMA-style competitions in the past.

His passion for Brazilian Jiu-Jitsu led him to open a studio in downtown Monaca where he trains, teaches, and mentors his pupils. Jiu-Jitsu is a form of martial arts many people do not fully understand. It is often considered an “underground” practice. Before I get into what Brazilian Jiu-Jitsu is, it is important Armezzani’s story be told.

Armezzani trained under the legend, fifth degree Ailson “Jucao” Brites. He has consistently been training BJJ (Brazilian Jiu-Jitsu) for over 11years. He is a highly sought after coach for both Jiu-Jitsu and MMA. Through his years and travels he has had the opportunity to train with the best Jiu-Jitsu coaches and competitors in the world.

As an amateur MMA fighter he was signed to LionHeart Fighters alongside of UFC fighters, Paul Bradley, Phil Davis, and Jimmy Hettes. He has trained with world champion fighters like Jon “Bones” Jones and Dominick Cruz. Lou retired from MMA in 2009 after his fifth pro fight when he severely injured his shoulder requiring reconstructive surgery. He is an active competitor in the IBJJF adult medium-heavy black belt division. Today, he runs his academy, Pride Lands PGH Brazilian Jiu-Jitsu Academy in Monaca, PA.

Armezzani said, “I originally started BJJ over 10 years ago for something to do after I graduated high school being that I wasn’t involved in sports like football and wrestling anymore. I fell in love with the sport instantly. I became obsessed. At that point I knew that I wanted to do this for the rest of my life.

Over the years Jiu-Jitsu led me into mixed martial arts, where I worked my way up to being a professional MMA fighter. After my fighting career ended, I started to think a lot more about opening my own academy. As the years passed, my wife, children, and I ended up moving to the Pittsburgh area from northeast PA as it was required by my job at the time.

We eventually settled in Center Township, and not long after as a few things fell into place I was able to open up my gym in Monaca. At my gym we offer classes for adults and children. In addition to offering Brazilian Jiu-Jitsu, you can take classes in Striking for MMA (which is a blend of Muay Thai and boxing).”

Armezzani described Brazilian Jiu-Jitsu as “one of the most effective martial arts on the planet” by endless stream of MMA fighters who have arm barred and choked their way to victory. He added, “Boiled down to its essence, a martial art is a way to defend yourself. It’s a violent solution for a problem with no other answer. You can’t run away. You can’t call for help. And you’re now on your back with a bigger, stronger attacker on top of you. BJJ is the answer for this horrific problem.”

“Brazilian Jiu-Jitsu is an amazing full body workout. The warm up, the drills and the rolling (sparring) will literally leave you crawling off the mats at the end of class,” he said. Jiu-Jitsu is engaging, fun and captivating. It’s like CrossFit but with chokes. With Jiu-Jitsu, you can get in get shape all while learning a potentially life-saving skill.”

Lou went on to say, “Jiu-Jitsu seems almost impossible when you first start it. Rolling around with the higher belts, you feel helpless, awkward and silly. With perseverance, dedication and focus you’ll be able to overcome the challenges of learning Jiu-Jitsu. You’ll feel empowered and soon you’ll feel in control of your thoughts and actions. Learning Jiu-Jitsu is learning how to overcome challenges. Overcoming challenges is the mortar for building your self-esteem.”

Checking Out the Classes

After a tip from our very own Rick Daman (who also does Jiu-Jitsu) about Armezzani’s studio, I had to check it out for myself. Lou’s 6 pm class consisted of a variety of adult men, including a Vietnam vet. I don’t know anything about Jiu-Jitsu, so I was excited to see how a training session unfolded. I walked in to find a brightly lit studio, with gray mats and white walls. One of my favorite things about the studio is the code of conduct. It’s a list of rules that not only applies to Lou’s studio, but also life in general:

Justin Matsook is one of Armezzani’s pupils at Pride Lands PGH. He told me, “This area has been hungry for a good BJJ place for a while, and Armezzani’s Pride Lands is first class. Not only have I been getting top of the line instruction from Lou, I also have created a friendship and bond with him, along with many others. The atmosphere Lou has established is great! My six and ten year-old daughters also attend classes there, and they love it! The environment Lou has for the kids is fun, disciplined, and a huge confidence builder, all on top of learning world class BJJ. Lou is wonderful with the kids! I am very proud to say my daughters and I are Lou Armezzani Pride Lands’ students.”

If you feel like stepping out of your comfort zone and challenging yourself mentally and physically, check out Pride Lands PGH Brazilian Jiu-Jitsu Academy. Armezzanni offers classes six days a week, with classes in the morning and in the early evening. Finally, Jiu-Jitsu isn’t just for men. Women and children are also welcome. In fact, Armezzani offers three kids classes per week.