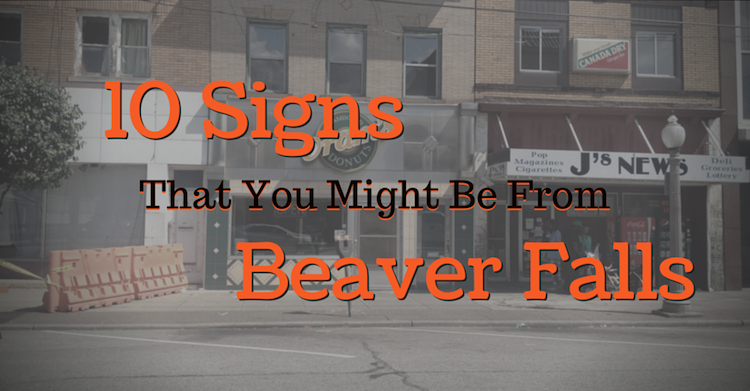 Growing up in in Beaver Falls, you carry around a sense of pride and affection for your home town.

It’s a blue collar city that has some of the nicest, hardworking people in the world. And everybody knows everybody. Seriously… everyone.

When people ask you where you’re from, you don’t say Pittsburgh. You say Beaver Falls. Because you are. And you’re proud of it.

Here are a few signs that let you know if you really ARE from Beaver Falls:

1. You’ve seen some of the greatest professional athletes of all-time play in High School.

Pick a sport, any sport.

Pick a decade, any decade.

Whether you went to Beaver Falls or Blackhawk, you’ve seen some of the greatest players to ever take the field, or the court, play before they hit the big time.

How many of you remember seeing Joe Namath play? One of the all-time greats to ever grace a football field. How about Greg Best before his time with our hometown Steelers? Brian Omogrosso before he pitched for the White Sox? Joe Lonnett? Or Sean and Archie Miller?

Even if you just think about the teams that we played against you still got to see the likes of Tito Francona, Tony Dorsett, Doc Medich, Ty Law, Darrelle Revis, etc.

2. You remember when Blackhawk wasn’t even a school district, and Beaver Falls was the only Big Dog in the 15010.

Before 1973, if you lived in the area, you went to Beaver Falls. Then it’s like an imaginary line was drawn through Patterson, West Mayfield, and a few other neighborhoods.

Kids in one house went to Beaver Falls, and the ones next door or across the street went to Blackhawk. Life as you knew it had changed forever.

This obviously isn’t a bad thing, because now we have two exciting school districts rich in history and tradition. Whether you’re a Cougar or a Tiger, you’re still from Beaver Falls. And you’re still Family.

3. You have at one point in your life met (or maybe even just glimpsed) Donnie Iris… and then bragged about it.

Admit it. You’ve run into Donnie at Giant Eagle, or spotted him at CoGo’s, or even passed his house when you’re taking your dog out for a walk. And you’ve told your friends.

4. You remember the Cow Ice Cream shoppe… before it was Headless.

Remember when there was practically NOTHING in Chippewa? No WalMart, No Giant Eagle, when they finally built Home Depot it was actually Builder’s Square… and there was no Beaver County Dodge.

But what stood on that ground was one of the most delicious ice cream shoppes known to man. The Cow.

Eventually someone chopped off the cow’s head and it closed shortly after, only to re-open across the street years later. But it just wasn’t meant to be… Rita’s bought the building after its second attempt, and it is now the Boardwalk across from Sal’s.

5. You have left your children (or your parents left you) at the Iggle’s Nest.

Giant Eagle gave us the Iggles Nest where those baby birds could sit and color, fight over who got to play Sonic the Hedgehog, and enjoy a Dixie cup full of Goldfish crackers while their Mommies went grocery shopping in peace.

If you don’t have a pool of your own, where can you even go nowadays? Between the Chippewa Pool behind the ball fields and the Wave Pool down in Beaver Falls, we always had a fun place to cool off.

Unfortunately, our next generation will never know those joys.

7. You know at least one person who worked for US Air.

8. You have legitimately gotten into a heated argument over one of the following:

Where can you get the best of each of these in Beaver Falls? That’s a question you don’t want to ask unless you have a serious amount of time for debate.

Why in the world did they even change the name of it in the first place? Perhaps the world will never know. But I know that I will never call it Route 376, simply on principle.

Maybe this is giving away my age a little too much to where I can no longer remain an unbiased source, but I’m ok with it. Anyone in my generation grew up on Route 18.

10. You spent a majority of your young-adult weekends on Route 18.

Every weekend, one lucky set of parents would drive an unruly group of pre-teens to one of three destinations:

I’m sure I could literally put together 100 of these, but I thought that this could get us started. What others can you think of? I’d love to hear them!

Allie Dixon
Allie is a lifelong resident of Beaver County. She is a 2006 graduate of Blackhawk High School, and still resides in Patterson Heights with her husband Andy and their 3-year old son, Luke. She is a Regional Manager at PLS Logistics and a sports fanatic. You can find her on Facebook as Allie Dixon.
 Share this article:  Facebook  Twitter
Hoping I'm at Least Half the Man He Was... May 8, 2015 By Elena D'Agostino
0
Comments
Eugene "Gene" A. Liberatore, Center Twp. May 7, 2015 By In Memory
0
Comments